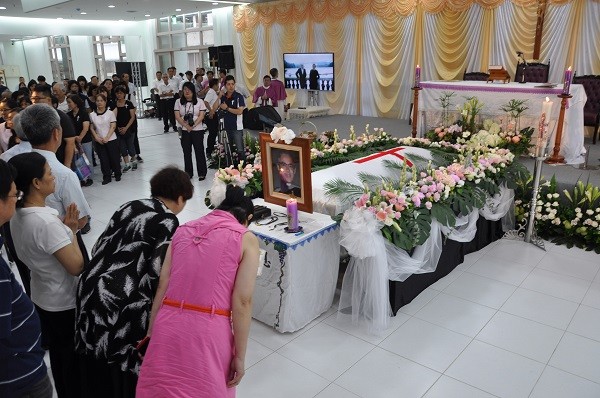 A funeral mass was held in Taiwan Sunday in tribute to Father Antonio Didone, who passed away last week after dedicating decades of his life to help underprivileged patients in Taiwan since he came as a Catholic missionary from Italy in 1961 at the age of 28.

Among the attendees were Vice President Chen Chien-jen (陳建仁), Acting County Magistrate Chen Chin-de (陳金德), his previous colleagues and patients who gathered to pay their last tribute to the revered father who spent most of his time in Taiwan in the hospital.

Chang Chu-lan (張主蘭), a 60-year-old woman, said she travelled from Hualien County especially for the funeral service because she was "deeply indebted to Didone for his kind help."

"When I visited a relative in Penghu County 40 years ago, I suffered from an asthma attack and was short of cash," said Chang, adding that it was Didone, who was then a doctor in Penhgu, who paid the medical bills so she could receive medical treatment in time.

After working in Penghu for six years, Didone relocated to Saint Mary's Hospital Luodong in 1967 where he served as superintendent of the hospital for 24 years from 1977-2001.

Didone went back to Italy in 1973 at the age of 40 to study pediatrics for four years mainly because he wanted to better serve the people in the then underprivileged county. He then returned to the hospital and continued to work in the hospital throughout his life.

The contributions Didone had made to the advancement of health and well-being of poor and disadvantaged people and to Taiwan serve as an example people from all walks of life, especially politicians, should look up to, Chen Chin-de said in his address.

Taiwan's government granted citizenship to Didone in December last year to honor his contributions to Taiwan. At that time Didone was hospitalized in an intensive care unit. He was buried in Guang Shing Catholic Cemetery in Yilan County's Dongshan Township.