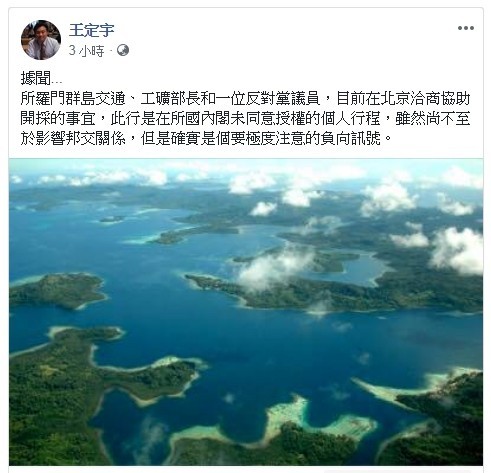 Over the past months, the Dominican Republic and Burkina Faso switched recognition from Taiwan to China amid rising pressure from the communist country.

The Ministry of Foreign Affairs said Saturday it was closely monitoring the situation, adding that the government of the Solomon Islands had told the Taiwanese mission that the relationship was stable.

Ruling Democratic Progressive Party lawmaker Wang Ding-yu (王定宇) earlier reported on his Facebook page that the ministers of transportation and mining as well as one opposition lawmaker from the Solomon Islands were visiting Beijing, but that the trip had not been authorized by the Cabinet and was of a private nature.

However, Wang warned that the fact that the journey was taking place at all should be seen as “a negative signal.” He added that as the Solomon Islands were preparing for general elections next year, some politicians might start having “illusions” about the possibility of Chinese investment and financial aid, the Central News Agency reported.

The Solomon Islands are situated in the Pacific east of Papua New Guinea and consist of six large and more than 900 small islands, with a population of about 600,000.