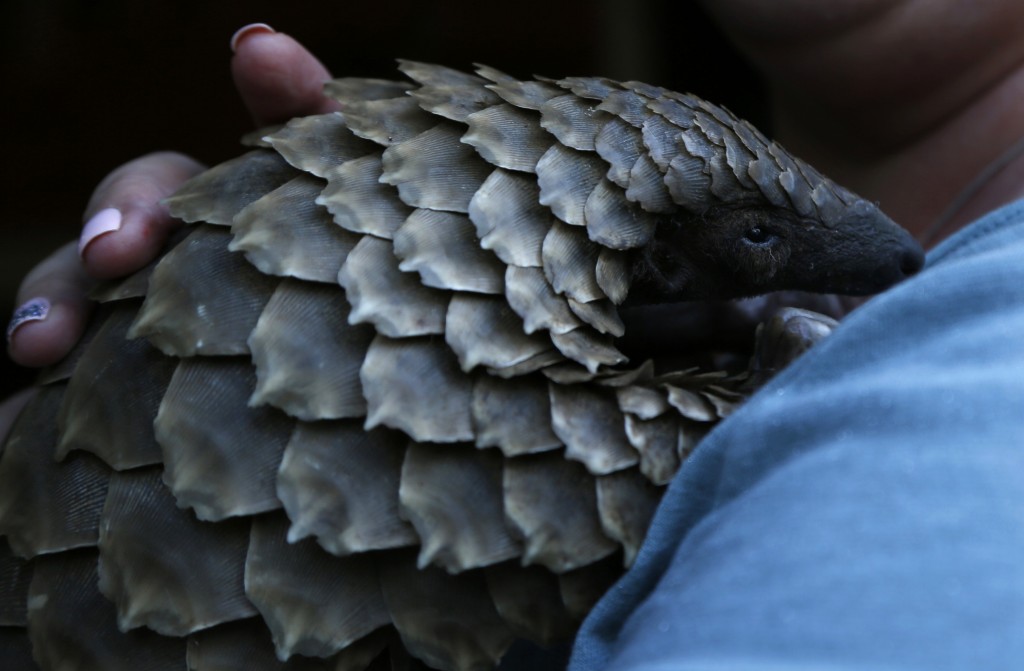 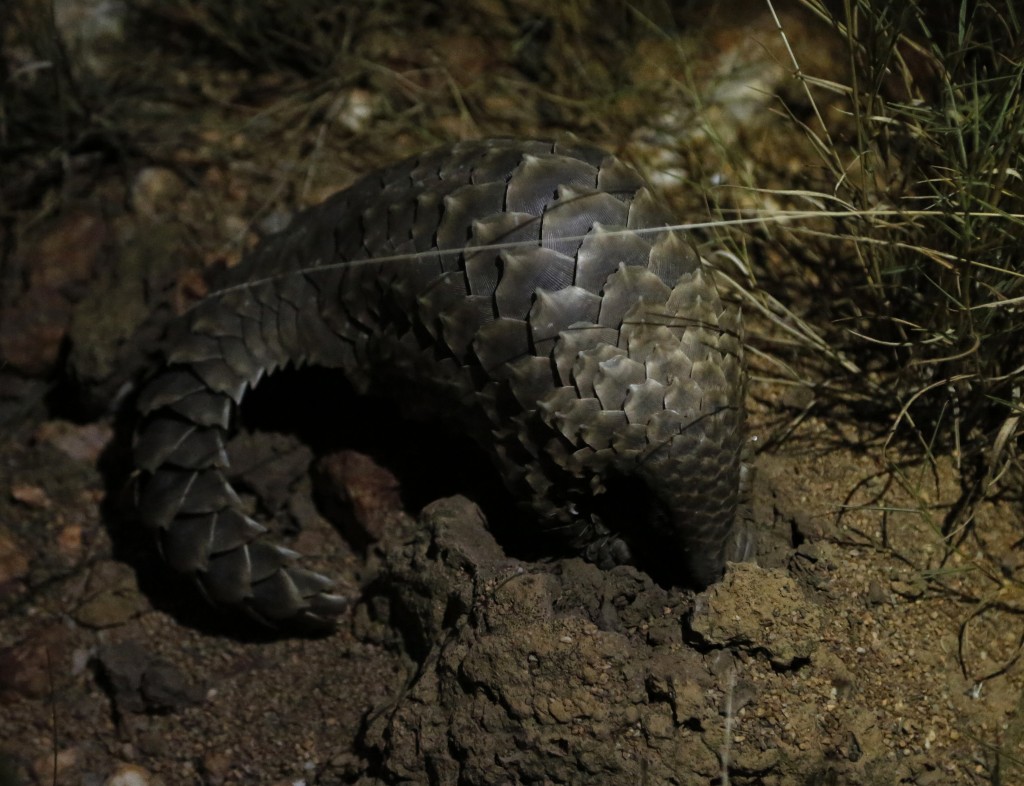 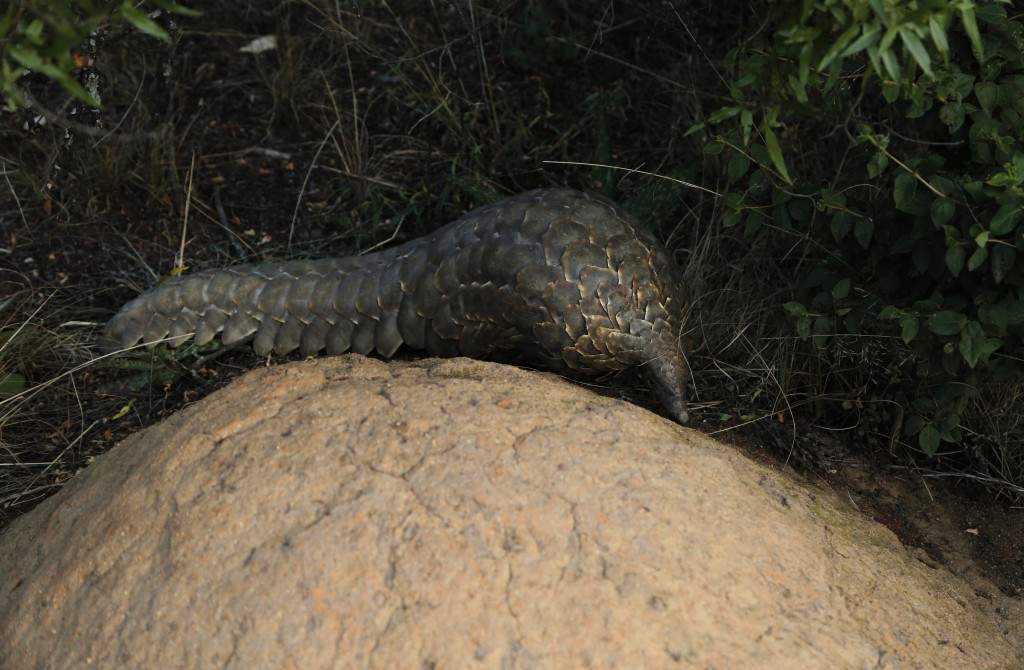 JOHANNESBURG (AP) — Monitored by a conservationist, a young pangolin slurped ants with a long tongue near a veterinary hospital that became a temporary home after the animal was found near the body of its mother, killed by a jolt from an electric fence. The six-month-old scaly anteater foraged on a hillside, building up strength in a tiny step for a global campaign to save one of the world's most heavily trafficked mammals.

Traffickers often sell the pangolin meat locally and ship the scales for use in traditional medicine in Asia, mainly China. The growing illegal industry has prompted plans in South Africa for a rehabilitation center for sick or rescued pangolins as well as the deployment of sniffer dogs specially trained to detect the scales' pungent aroma.

Africa's four species of pangolins are under increasing pressure from poachers because Asia's four species have been decimated, according to experts. While commercial trade in all eight species is forbidden, international confiscations of African pangolin scales amounted to about 47 tons in 2017, more than double the quantity seized in the previous year, said the African Pangolin Working Group , a conservation organization based in South Africa.

"The rate of escalation is astounding," said Eric Ichikowitz, director of a South African foundation.

The Ichikowitz Family Foundation , which has previously trained dogs to detect rhino horn, has funded the training of several dogs that will check for hidden pangolin scales at South African borders, Ichikowitz said.

The foundation has also acquired land near Johannesburg for construction of a "pangalorium" — a research and medical center for pangolins, including the growing number of live animals seized in sting operations, he said.

Pangolin scales contain keratin, a protein also found in rhino horn and human fingernails. There is no scientific proof that they provide any medicinal value. Conservationists say well over 1 million pangolins have been poached since around 2000; the various kinds range from vulnerable to critically endangered on a list of threatened species.

About 10 rescued pangolins have been treated at the Johannesburg Wildlife Veterinary Hospital since last year. Pangolins, which curl into a ball when they feel threatened, fare poorly in captivity and have to be taken into a natural setting to feed. The health of those that are transported alive by traffickers easily deteriorates.

Not all 10 of the rescued pangolins have survived. A male pangolin that was seized in a recent law enforcement bust had a fractured leg, possibly from a snare, and received two surgeries. The animal could not recover and was euthanized. And the young female pangolin found near the body of its mother was later released into the wild but weakened and died from pneumonia.

"There's so little known about pangolins — their diseases, their parasites and what affects them — that it's all a work in progress," said Nicci Wright, a wildlife rehabilitation specialist and a consultant to the African branch of the Humane Society International, an animal protection group.

One pangolin that was confiscated in Johannesburg after being brought from Zimbabwe had been doused in bleach, apparently to disguise its strong natural smell at the border, Wright said. Another was covered in pig manure for the same reason. In a different case, Wright said, a rescued pangolin was "absolutely pitch black" because it had been drenched in fuel while being clandestinely transported by car.

There are currently about 30 pangolin trafficking cases in the South African courts, a sharp increase from previous years. Conservationists are encouraged by several jail sentences — the first ever — for pangolin poachers and traders in South Africa starting last year. The punishments range from three to seven years in prison.

While the export of pangolin scales to Asia surges, there have been instances of traffickers apparently trying to sell live pangolins to people they think will want to rehabilitate the animals, in what amounts to a form of ransom, said Raymond Jansen, chairman of the African Pangolin Working Group.

"This is the feeling I'm getting," Jansen said. "We're not quite sure what to make of it."