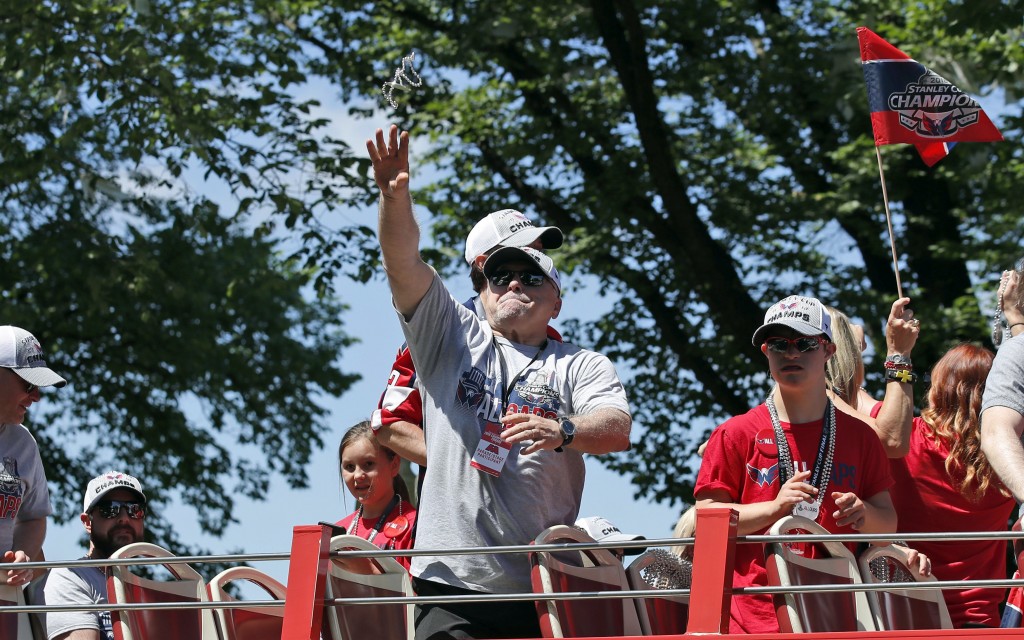 WASHINGTON (AP) — Barry Trotz professed his love for the D.C. area and dropped at least a couple of hints during the Stanley Cup celebration that suggest he'll be back as Capitals coach next season.

Trotz's contract status is the biggest question facing Washington once the partying ends. General manager Brian MacLellan — who didn't extend Trotz's contract last summer and wanted to see improvements throughout the organization before talking about an extension — said the veteran coach will be back if he wants to be, and it now seems possible that the relationship can be repaired.

"Love this, love the community," Trotz told a crowd of fans on the National Mall on Tuesday at the team's Cup rally. "We're going to do it again."

Minutes later, the 55-year-old who led the Capitals to the Presidents' Trophy in 2016 and 2017, four consecutive playoff appearances and now the Stanley Cup, went a step further even as he insisted his future isn't on his mind.

"I'm not thinking about it right now, for sure," Trotz said. "We'll talk. We're going to enjoy this with the players. I love the players, I love D.C., my family loves it here. We'll get something done."

It's up to owner Ted Leonsis, team president Dick Patrick and MacLellan to come to Trotz with an offer that makes sense for him to return. The New York Islanders currently have an opening, and other teams around the NHL might even fire their coaches to hire Trotz, whose relaxed attitude during the playoffs contributed to the Capitals' run.

"He did a lot better job of that, and it's trickled down to the players," defenseman John Carlson said last week.

Trotz is under contract through June 30, and like Carlson, he can become a free agent July 1. Based on the salaries of other Cup-winning coaches like Toronto's Mike Babcock, Chicago's Joel Quenneville and Montreal's Claude Julien, it's reasonable to think Trotz could make $4 million-plus annually on a new deal with the Capitals or another team.

Over the past 40 years, only four Stanley Cup-winning coaches didn't return to that team the next season. Scotty Bowman left Montreal to become Buffalo's GM in 1979, retired after winning with Detroit in 2002 and replaced Bob Johnson in Pittsburgh in 1991 when Johnson became ill. The other instance was when Mike Keenan left the Rangers after winning in 1994 because of a disagreement with GM Neil Smith and New York's management.

That's the most similar situation to Trotz, a proud veteran of 19 NHL seasons who went through a lame-duck season with prospective coach-in-waiting Todd Reirden still on his staff.

Throughout the season and playoffs, Trotz insisted he didn't lose any sleep over his uncertain future. That wasn't lost on his players.

"Maybe that's why he's so relaxed," center Nicklas Backstrom said when the Capitals were on the eve of winning it all. "He doesn't know what's going to happen and I don't think anyone knows. I think he's just enjoying this like everyone else in here and trying to take advantage of the situation that we're very fortunate to be in."

Basking in the love of hundreds of thousands of fans who turned out for the parade and rally, Trotz had enough clarity — the word he has used to describe his Zen-like mindset — to put into perspective how so many playoff stumbles helped lead his team to this point.

"I think you understand adversity, what it really is," Trotz said. "It's sort of a stepping stone instead of a road block and I think we understand that as a group. This group will obviously live a life together in infamy for what they've done here, but we won't be the same. It's a legacy thing. The next group has to do it. And it's going to be our rookies that had this experience and hopefully we can carry it to maybe a back-to-back."