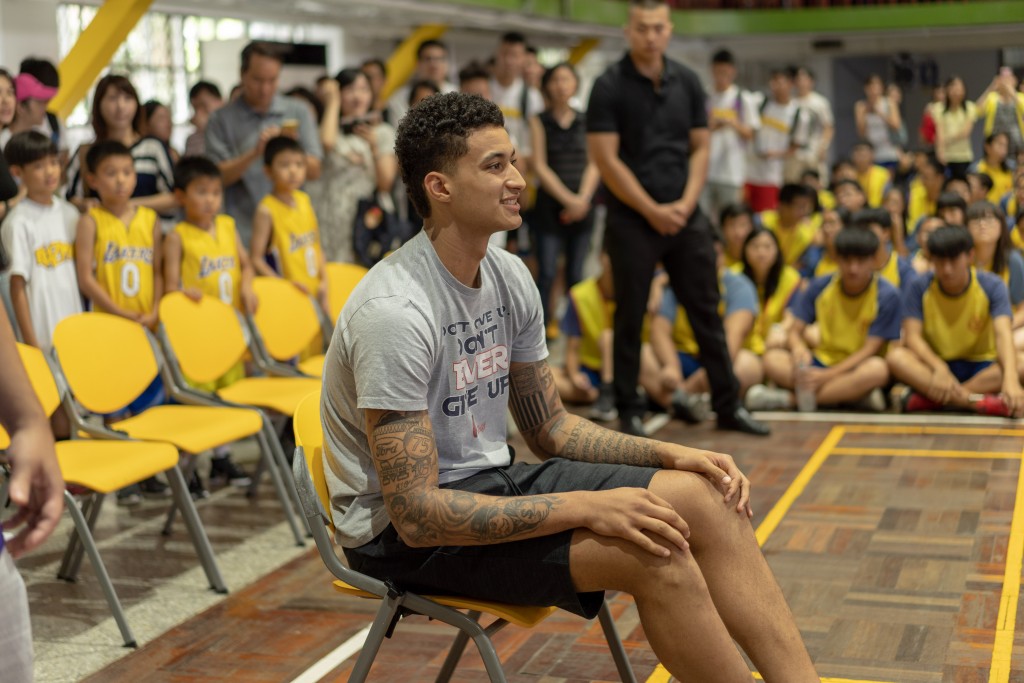 Los Angeles Lakers star Kyle Kuzma enjoyed three days in Taipei. On Wednesday Kuzma toured the city followed by a meet-and-greet event at Triangle. The NBA athlete made a guest appearance at the NBA Store Thursday and then spent Friday at Zhonghe Middle School for a basketball demonstration with students.

Taiwan News had the opportunity to speak with Kuzma about his first trip to Taipei. Kuzma came to Taiwan for a personal visit, to “experience the culture of Taiwan, get to know Taiwan,” according to Kenric Wong, who arranged Kuzma’s trip here to Taiwan. (Photo courtesy of Jett He)

“We’re trying to establish his brand name recognition here in Taiwan and root his image within the Taiwan community”.

On Wednesday night, more than 100 fans waited to meet Kuzma, take pictures, or snag an autograph. Fans came out in their Lakers jerseys and were feeling the “Kuzmania.” Kuzma felt the love.

Kuzma said of Taiwan: “It’s super cool here. The basketball community is something that kind of sticks out to me. I did not know a lot of people here really liked basketball. When you think of Asia, you think of China, but Taiwan has been good to me so far”. Kuzma spent some time visiting major Taipei sites, such as Taipei 101 and night markets. He also went to Zhonghe Middle School, “interacting with the kids, teaching the kids a little about basketball,” on Friday, June 8.

“That school isn’t a very prestigious or wealthy school; that’s why we went to that school. We wanted to help and give it more exposure. It will be more meaningful to those kids,” said Wong.
While at Zhonghe Middle School, Kuzma answered students’ questions about his experiences in the NBA, gave students advice, and demonstrated basketball skills for the crowd of students. He also played in a scrimmage game with the young students, having fun on the court. (Photo courtesy of Jett He)

Kuzma encouraged a young female student to dance in front of the crowd. Although she was shy at first, she found the courage to show off her moves to the star. At the end of the event, Kuzma gave her a signed ball for her bravery.

This is an example of Kuzma giving back to the community and boosting young students’ confidence, not just in the U.S. but also worldwide, starting with Taiwan, according to Wong.

After being selected as the 27th overall pick in the first round of the 2017 NBA draft, he described his time so far in the NBA as a dream come true. “It feels good, kind of what I always dreamed about, being an NBA player. All I ever wanted to be in life.”

Kuzma knew he wanted to play in the NBA, but he did not imagine how good it was going to be, “with all the accolades and stuff. You don’t really play basketball for accolades, kind of play for the love of the game.” His love for the game was demonstrated in his stellar rookie season. Kuzma finished the season with an average of 16.1 points, 6.3 rebounds, and 1.8 assists per game. Kuzma was also selected to join the NBA All-Rookie First Team.

Kuzma played alongside fellow rookie Lonzo Ball and two-time NBA All-Star Isiah Thomas. He comments on playing with them: “It’s fun. Both of those guys are great players. Isiah Thomas is a great role model to me and the rest of the young guys. Me and Lonzo are very close, we talk all the time.”

Beyond the accolades, Kuzma says he is focused on “becoming a good basketball player, trying to get better every single day”.

He is already looking ahead to the next season, expecting great things of his team. He plans to “become a better basketball player all around and win more games. Hopefully [we] make the playoffs”.