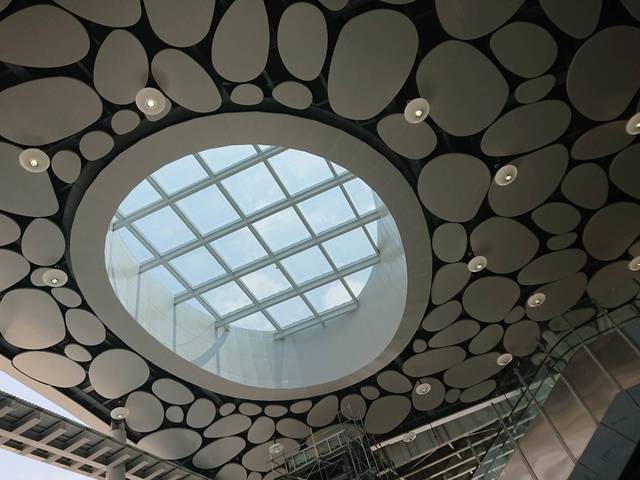 TAIPEI (Taiwan News) -- Photos showing progress on the interior of the ambitious new Kaohsiung Main Train Station have been made public as part of the "2018 Kaohsiung Architecture Festival," revealing a sunken plaza covered with a massive ceiling containing a sea of oval-shaped lights punctuated with a giant elliptical glass window.

The station was designed by Dutch architect Francine Houben from the architecture firm Mecanoo. The new station is meant to be the nexus of Kaohsiung's new underground railway project, which includes a total of seven below ground stations that line a 9.75 kilometer railway tunnel.

The roof of the new structure features a curvilinear shape covered with a landscaped canopy, which is part of Kaohsiung's push to break free of its smoggy, urban jungle reputation to become a greener, more sustainable city. Inside is a sunken central hall which is lit by a vast array of oval-shaped lights and a massive elliptical window.

In addition to the central plaza, the structure will also contain a hotel, retail outlets and restaurants. On top of the landscaped canopy, a bike path will run from east west, while the colonial era Japanese building will be relocated to its original site nearby to reconnect the city with its past.