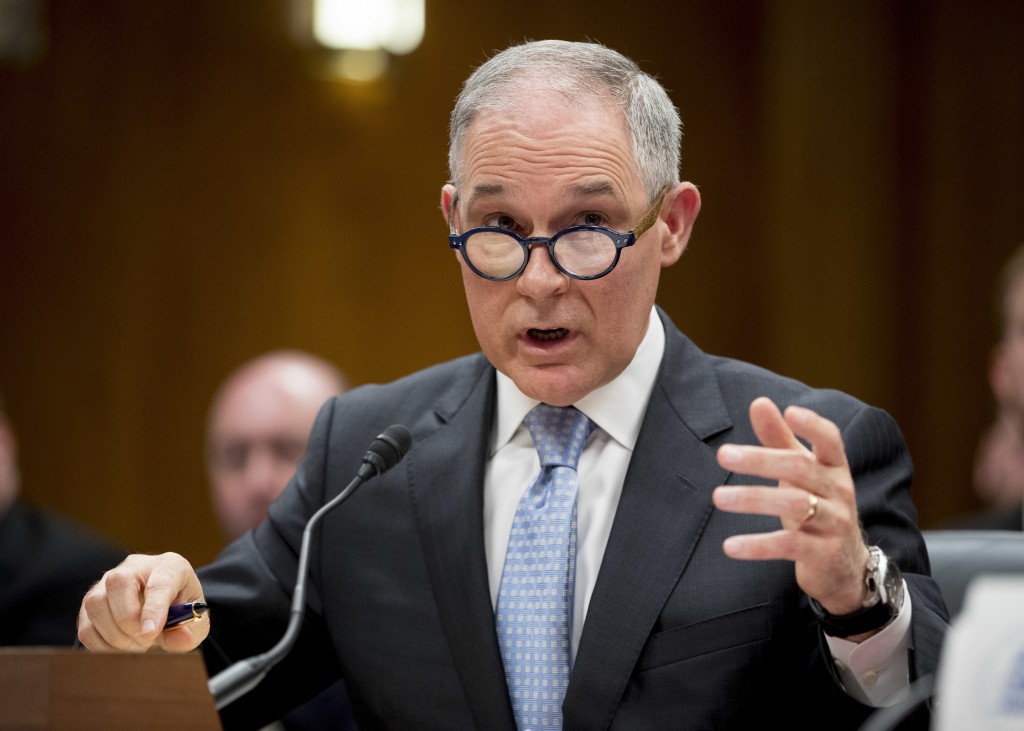 WASHINGTON (AP) — Environmental Protection Agency chief Scott Pruitt laughed off questions about whether he used his office to try to help his wife get a "business opportunity" with Chick-fil-A, while a close aide abruptly resigned amid new ethics allegations against her boss.

Pruitt said in a statement Wednesday that his scheduling director, Millan Hupp, 26, had resigned. It came two days after Democratic lawmakers made public her testimony to a House oversight panel that Pruitt had her do personal errands for him, including inquiring about buying a used mattress from the Trump International Hotel.

Last year, Pruitt also directed Hupp's younger sister to reach out to a senior executive at Chick-fil-A to inquire about a "business opportunity." At the time, Sydney Hupp, 25, was also working in Pruitt's office as an EPA scheduler.

That business opportunity turned out to be Pruitt's desire to acquire a fast-food franchise for his wife.

Despite the mounting scandals, President Donald Trump continues to stand by Pruitt and lavished praise on him Wednesday at a hurricane-preparedness briefing attended by Cabinet secretaries and agency heads.

"EPA is doing really, really well," Trump told Pruitt. "And you know, somebody has to say that about you a little bit. You know that, Scott. But you have done — I tell you, the EPA is doing so well. ... And people are really impressed with the job that's being done at the EPA. Thank you very much, Scott."

On Wednesday, Pruitt laughed when a reporter asked about the reports he had tried to use his government position to financially benefit his spouse.

"I mean, look, my wife is an entrepreneur herself. I love, she loves, we love Chick-fil-A as a franchise of faith," Pruitt told a reporter for Nexstar Media Group, which owns local television stations around the country. A Republican former Oklahoma attorney general, Pruitt added that there needs to be more locations of the fast-food chain in his hometown of Tulsa.

Founded in Atlanta, the Chick-fil-A chain is known for incorporating Christianity into its business code, including shutting down nationwide on Sundays. The two-generation family business has angered some customers and pleased others with its donations to conservative causes, including funding campaigns fighting same-sex marriage.

Democrats quickly pounced on Pruitt's statement, accusing him of using religion to try to deflect from his misdeeds.

"He's hiding behind a very cheap version of faith, in the form of chicken," said Rep. Gerry Connolly of Virginia, the ranking Democrat on a House subcommittee on Government Operations. "This is somebody who is profoundly ethically challenged, who's self-dealing. He's in the trough with all four paws and snout. ... We're dealing with a real pattern here, and frankly it's disgusting."

GOP members of Congress have largely followed Trump's lead in sticking by Pruitt, though there were increasing signs cracks are developing in that support.

Iowa Republican Sen. Joni Ernst suggested this week that it might be time for Trump to tell Pruitt to go.

Pruitt "is about as swampy as you get here in Washington, D.C. And if the president wants to drain the swamp, he needs to take a look at his own Cabinet," Ernst said Tuesday at an energy policy forum.

Pruitt is the subject of more than a dozen federal investigations into his lavish spending on travel and security, his dealings with subordinates and other matters.

Millan Hupp was described by former EPA staffers as one of Pruitt's closest and most loyal aides. She told the House panel that Pruitt had her ask about getting an "old mattress" from the Trump hotel at about the same time he was moving to a new apartment in Washington.

Pruitt also directed the elder Hupp, an Oklahoman like her boss, to book a personal trip to the Rose Bowl for him and search for housing for him in the Washington area, she told the investigators.

Pruitt's statement announcing her resignation called Hupp "a valued member of the EPA team." The EPA gave no reason for her departure.

She is the fourth senior EPA political appointee to resign in the last two months, since news first broke that Pruitt last year leased a bargain-priced Capitol Hill condo tied to an oil and gas lobbyist.

In appearances before congressional panels since then, Pruitt has repeatedly blamed subordinates for his alleged ethical lapses.

Rep. Elijah Cummings of Maryland, the ranking Democrat on the House Oversight committee investigating Pruitt, said Hupp shouldn't have to take the fall for her boss.

"Ms. Hupp cooperated with our investigation and should not become the latest scapegoat for Administrator Pruitt's litany of abuses, his disregard for our nation's ethics laws, and his refusal to accept responsibility for his own actions," Cummings said.

Pruitt's chief of staff, Ryan Jackson, and former top policy adviser Samantha Dravis are due to appear before the oversight committee's investigators later this month.

For his part, Pruitt suggested the criticism, investigations and unending stream of negative revelations about him were all political attacks motivated by his efforts to roll back environmental regulations.

"I just think that with great change comes, you know, I think, opposition," he said.