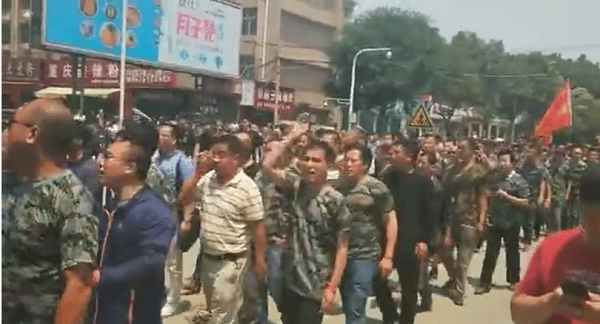 TAIPEI (Taiwan News) – The large veteran protests that erupted last weekend in China’s Henan province, have quietly dissipated, after the government conceded to the protester’s initial demands, to release several people being held by police.

The veteran military officer’s wife, who was arrested for “causing a disturbance” when she tried to file an official letter of protest in Beijing on behalf of her husband, has reportedly been released from police custody along with several veterans that were arrested early last week.

Di Hong Lian (翟洪蓮) the wife of a veteran who allegedly suffered mistreatment and neglect at the hands of China’s Ministry of Veteran’s Affairs, was arrested on May 23. Initially she was reportedly given seven days of detention for her actions in support of her husband’s rights.

The unjust arrest sparked outrage among the local veterans in Luohe City (漯河市) of Henan. Seven days passed without her release, as the number of protesting veterans continued to increase.

The protests reached their peak on the afternoon of June 3, with more than 1,000 veterans joining the protests. However, by the morning of June 5, the riverside plaza in Luohe City where they had gathered was cleared of protesters, with most said to have returned home the previous evening.

Given the significance of the June 4 date, as the 29th anniversary of the Tiananmen Square Massacre, reports suggest that Chinese security officials chose to release the arrested veterans to salve the situation quickly, and have the protesters disperse as quietly as possible.

According to Liberty Times, there are unconfirmed reports that the government provided money to the police instructing them to give RMB$1,500 (US$235) to each of the protesting veterans.

Local authorities also reportedly dispatched an equal number of police officers (1,000+) to match the number of veterans pouring into the city over the weekend.

Despite the apparent end to the Luohe protests, the Chinese media outlet Epoch Pioneer says that the struggle is not over, and that veterans groups throughout the country remain on alert, and are ready to act in defense of veterans and their rights in the future, should it be necessary.