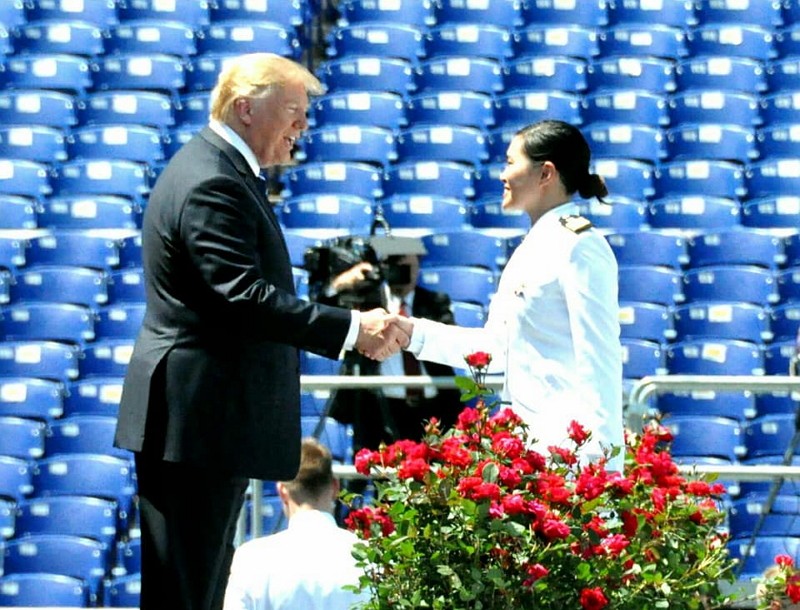 TAIPEI (Taiwan News) – Taiwanese student Hu Chia-lin (胡家琳) received congratulations – dressed in the uniform of the Taiwanese Navy -- from U.S. President Donald Trump at the graduation ceremony for the U.S. Naval Academy in Annapolis, Maryland held at the Navy-Marine Corps Memorial Stadium on May 25.

Hu, one of the 10 international graduates to have attended the ceremony, noted that she had asked to don the navy uniform to participate in one of the most memorable events in her life, adding that she felt overwhelmed when her name and country were called.

Growing up in a military family, Hu set her mind to join the army at an early age, reports the Military News Agency. It was the support of her family and the tough training she received while attending the Taiwan Navy Academy in Kaohsiung that gave her strength and equipped her with what was required to survive the excruciating challenges and grueling experience that she overcame during her study in the U.S. Navy Academy, she said.

Taking pride in his daughter’s achievement, Hu Yuan-te (胡元德), a retired staff sergeant in the Taiwan Army, posted a photo on Facebook featuring what he called a “glorious moment” of Hu Chia-lin shaking hands with Trump, and another photo where he saluted her daughter proudly.

The three daughters of Hu -- Hu Chia-yu (胡家瑜), Hu Chia-lin (胡家琳), and Hu Chia-chi (胡家琪) -- have all chosen a military career following their father’s footsteps. Hu Chia-yu and Hu Chia-lin studied in The Citadel (the Military College of South Carolina) and the U.S. Navy Academy respectively, while the youngest daughter Hu Chia-chi has been granted admission to the U.S. Military Academy, also known as West Point, soon to become the third female graduate of the Taiwan Military Academy to attend the prestigious school.