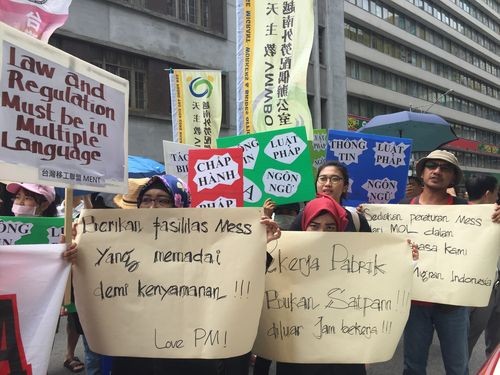 Taipei, June 3 (CNA) An inter-ministerial meeting is scheduled early June to discuss new regulations that are expected to stipulate the need for a safe distance between dormitories for migrant workers and factories, a labor official said Sunday, following a march attended by several hundred migrant workers and labor rights activists.

"We understand their demands. The one that dormitories be located a safe distance from factories is the right way to keep residences free from workplace hazards," Deputy Labor Minister Shih Keh-her told CNA by phone.

The Ministry of Labor has scheduled a meeting early this month with the Ministry of the Interior, which is responsible for implementing fire safety regulations, and the Ministry of Economic Affairs, to discuss how best to address this issue, Shih said.

Migrant workers from the Philippines, Indonesia, Vietnam and Thailand demonstrated earlier Sunday, the latest in a series of protests in the wake of two recent factory fires that claimed the lives of eight migrant workers.

In December 2017, six Vietnamese migrant workers died in a fire that engulfed their dormitory in Taoyuan City, which was located on the upper level of a factory warehouse made of sheet iron. The structure, which it has since been alleged was illegal, was next to a factory run by Sican Co., which produces solar control window film.

Four months later, a blaze at a facility operated by Chin Poon, a printed circuit board factory in the same city, claimed the lives of six firefighters, as well as two Thai migrant workers who were trapped in a dormitory inside the factory complex.

"We would be living in a safer place if the dormitory was outside the factory," a migrant from the Philippines told CNA, noting that his dormitory is on the third floor of a textile factory in Taoyuan's Nankan District.

The Filipino who identified himself as Manuel said that he sometimes worries about what he will do if there is a fire because the dorm has only one exit.

Robert, another Filipino migrant who works for a cutting tool material manufacturer in Taoyuan's Yangmei District, said he didn't live in an onsite dormitory.

"I don't feel danger when I'm in the dormitory because it is away from the factory and my employer often communicates with us, but not many migrant workers are as lucky. For the safety of all migrants, we want separation of dorms and factories," he said.

A migrant worker from Indonesia who gave his name as Nawi said the accommodation provided by his employer is close to the electronics factory where he works. "I am a bit worried about housing safety," he said.

The protesters marched from the Ministry of Labor past the Ministry of the Interior toward the Executive Yuan and were joined by members of the National Association for Firefighters' Rights and other civic groups.

Outside the Ministry of the Interior, firefighters demanded to be involved in discussions to address the flaws in existing fire safety regulations, the Fire Services Act, and that the association be allowed to participate in investigations into the causes of fatalities among firefighters to prevent future occurrences.