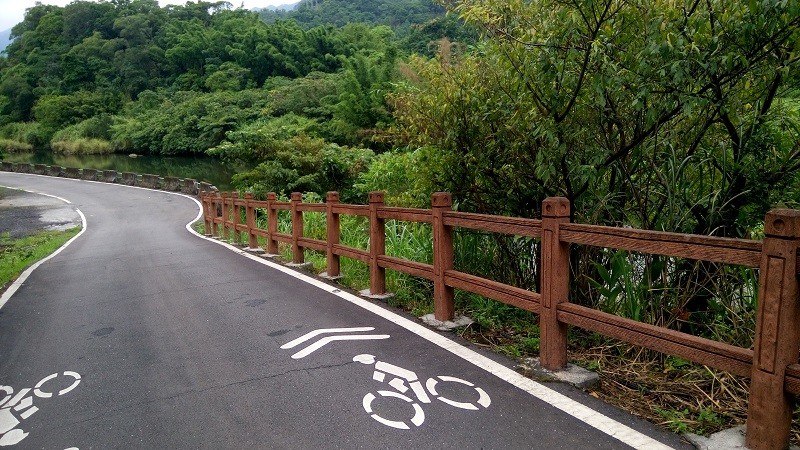 TAIPEI (Taiwan News)--On Saturday (June 2), I went jogging on the Shuangxi Bikeway and visited many worthwhile attractions in this New Taipei district, which is rich in history and natural scenery. Shuangxi, dubbed the “Little Switzerland of Taiwan” for its natural beauty and serenity, used to be an important midway hub of the Danlan Old Trail (淡蘭古道) system, which connected Taipei and Yilan during the Qing Dynasty. I could not wait to share my experience of embracing and enjoying my Saturday journey. It was a perfect day for jogging or any other kinds of outdoor activities as the sky was overcast and the temperature was cool.

I started from Shuangxi Railway Station, near which I parked my car. There is a bicycle rental station right next to the train station. I noticed that the rental station also provides shower facilities, which are a blessing to customers after a sweaty bike ride. The bike rental next to the train station I turned left on Zhonghua Road (中華路) in front of the station, continued jogging on Taiping Road (太平路), and turned left into Tatung Road (大同路). Soon after turning into Tatung Road for a tour of the town's some interesting cultural and historical legacies, I turned right into the small street (Changan Rd.長安路) in front of the San Zhong Temple (三忠廟). The street exudes a strong ancient flavor from an old Chinese herb store and some old stone houses. I visited the Zhou Historic House from the outside as well as the site of the old ferry at the confluence of Mudan River and Pinglin River that are the namesake of Shuangxi (double rivers). The two-story old house, which is considered the most luxurious old house in the Shuangxi area, was built during the Qing Dynasty. Located beside what was once a bustling ferry dock, the Zhou Historic House is made of sandstone and red bricks in a style that combines East and West. The confluence of the Mudan River and Pinglin River

After visiting the historic street, I came back to Taiping Road and continued my running journey. Running past and around Shuangxi High School, I found myself on Meixhuxi (梅竹蹊) Road, a street hidden behind Shuangxi High School. I visited another historic site across the street from the high school’s backdoor--the residence of Lien Xu-zhuang (連舉人厝）, who passed the imperial provincial civil service examination in 1876 during the Qing Dynasty, which was a big deal back then. After visiting all the most important historic places in the town, I was ready to enjoy jogging on the pastoral bikeway that runs along the Pingllin River valley. The bikeway, a class 2 bike lane, is 6.2 kilometers long that starts at the Shuangxi Railway Station and ends at the Chingshuei Bridge (清水橋), the section of the river under which is reportedly locals' favorite natural pool and popular barbecue spot in summer.

There are two lavatories along the bikeway. One is located at the midway rest area and the other beside the Chingshuei Bridge. The bikeway runs parallel to the Jifu Highway (基福公路) on the other side of the river, and there are several branch roads that connect the bikeway with Jifu Highway. Houses beside the bikeway On my way back, I took the branch road at the Yuchr Junction (魚池路口) and turned right on Jifu Highway. I jugged about 800 meters along the highway to the Lotus Garden on the right side of the highway, where beauriful pink lotus flowers were blooming. I also visited another lovely old house across the highway from the Lotus Garden. From here cyclists can ride along the highway to get back to the train station. In my case, I ran back to the Yuchr Junction and took the same bikeway to where I parked my car near the railway station. Even though it was Saturday, I encountered only a couple of cars during my whole jogging journey except for the time when I was on the Jifu Highway, where the traffic is much heavier. My jogging journey lasted for about three and a half hours including taking photos and resting.