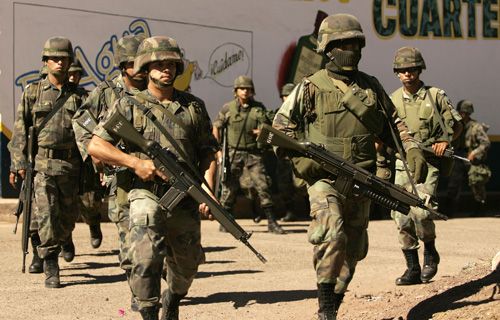 Soldiers killed a suspected trafficker and wounded another in a gunbattle in the mountains of western Mexico, the first major clash since Mexico's President Felipe Calderon sent troops to restore order in a region terrorized by drug gangs, the military said.
Mexico's Defense Department said soldiers were attacked Wednesday by gunmen protecting a marijuana field near Aguililla, a remote farming community overrun by a drug cartel.
In the ensuing firefight, one of the gunmen died, one was wounded and one escaped, the military said in a statement. In that raid and others in Aguililla, soldiers and police seized a dozen assault rifles and pistols, radios, a satellite phone, and a press used for packing marijuana.
On Monday, Calderon sent soldiers, sailors and federal police to Michoacan state to crack down on the drug gangs that have been waging a bloody war over lucrative shipping routes for marijuana and opium plantations and billion dollar smuggling routes to the United States.
Calderon, who took office December 1, said Wednesday he was also assigning 10,000 soldiers and sailors - mainly from military police units - to the federal police force, which is used in everything from riot control to drug interdiction. Many current members of that police force are on loan from the military.
"We must, at all cost, prevent this public safety problem from becoming a national security problem, to the extent it challenges the Mexican government," Calderon said in announcing the transfers. "This task will not be easy or quick, but the public demands results and we must act immediately."
There have been more than 2,000 drug-related killings across Mexico this year. Calderon's mountainous home state of Michoacan has been one of the worst hit by the violence.
Investigators say Aguililla, some 200 kilometers southwest of Morelia, the state capital, has been a key stronghold of a Michoacan cartel called Los Valencia, who have carried out a wave of killings of rival gangsters and state police.
The winding mountain roads into the town make perfect terrain for ambushes and assailants killed 10 police in two recent attacks on nearby highways.
Most visitors stay away from the community and journalists from nearby cities have been turned away by armed men.
"It's a no man's land. But with this operation we can re-conquer it and the rest of the state," said Francisco Garciduenas, a top federal prosecutor in the nearby town of Apatzingan.
On Wednesday, soldiers patrolled Aguililla's streets supported by armored vehicles with machine-gun turrets and black helicopters flying low over the town. Other soldiers manned check points, ordering passengers out of cars and busses and frisking them for guns for drugs.
Jaime Lopez, a soldier pointing his rifle at a resident he was searching, said he was not scared of the drug traffickers.
"They are tough, but we are tougher," he said.
The new offensive follows earlier crackdowns by Mexican presidents who ordered mass firings of corrupt police, revamped courts, sent thousands of troops to battle traffickers and accelerated drug seizures - without making much of a dent on the quantity of narcotics crossing the U.S.-Mexico border.
During the term of Calderon's predecessor Vicente Fox, police arrested several top drug lords, and tens of thousands of their soldiers. But investigators say his efforts created an underworld power vacuum in the country responsible for most of the marijuana, heroin, cocaine and methamphetamines in the U.S.
Investigators say the Gulf cartel unleashed a bloody turf war after it sought to battle its way into Michoacan after the 2004 arrest of Valencia drug gang leader Armando Valencia.
The Michoacan violence has included a wave of decapitations, with the human heads left in public places with written warnings. One recent message in Michoacan read: "See. Hear. Shut Up. If you want to stay alive."