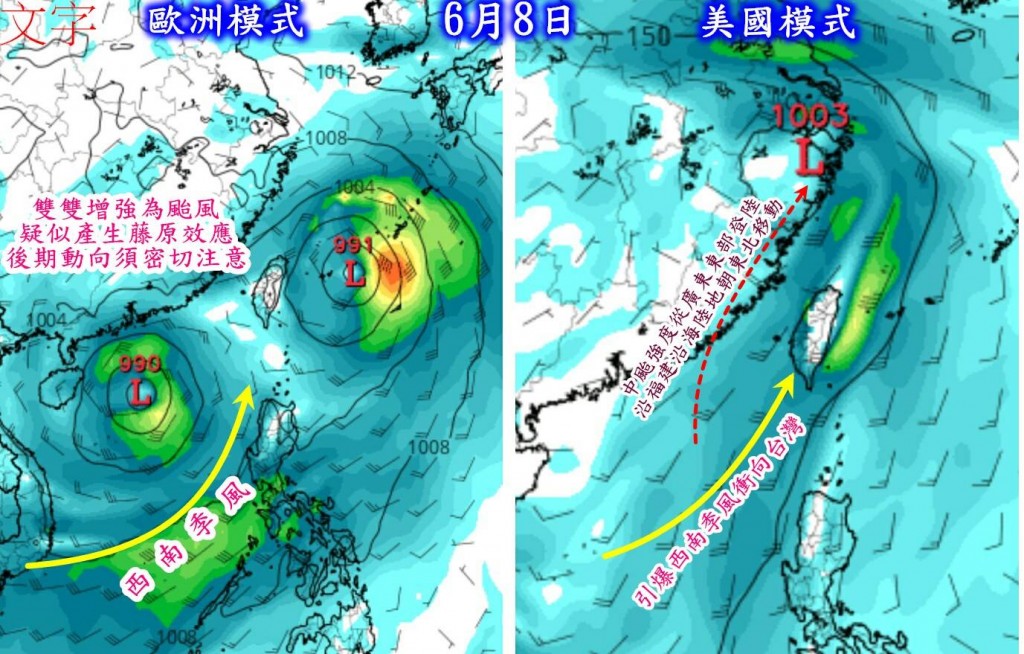 TAIPEI (Taiwan News) -- European and U.S. weather centers are predicting typhoons will be forming near Taiwan next week, with the European model predicting twin cyclones could interact with each other and bring heavy rains to Taiwan.

The European Centre for Medium-Range Weather Forecasts (ECMWF) model predicts that Taiwan will be affected by two typhoons, one to its northeast and one to its southwest from June 8 to June 13. This may lead to the Fujiwhara effect in which the two cyclones feed each other and touch off massive southwestern monsoon rains in Taiwan.

In some cases wir the Fujiwhara effect, if the two cyclones are close enough, they can merge together to form an even larger typhoon. Based on the early European model, Taiwan would be in between the two typhoons, thus whether the two merge or just draw nearer to each other, Taiwan wil bear the brunt of the affects in the form of heavy rains and strong winds.

The National Centers for Environmental Prediction (NCEP) Global Forecast System (GFS) predicts that a typhoon will form off of Guangdong on June 6 and then work its way up the coast of Fujian Province. The U.S. model predicts that this will generate a powerful southwest monsoon system that would pack a big punch and bring heavy rain to Taiwan.

Taiwanese meteorologist Wu Der-rong (吳德榮) said that because the weather simulations of the Europe, U.S. and Taiwan differ greatly at this stage, therefore more time is needed to observe conditions and it is too early to rush to conclusions.

Facebook weather site look.weather.typhoon (觀氣象看天氣), whether or not typhoons form or plum rains approach, there should be a significant increase in precipitation between June 8 and June 13.