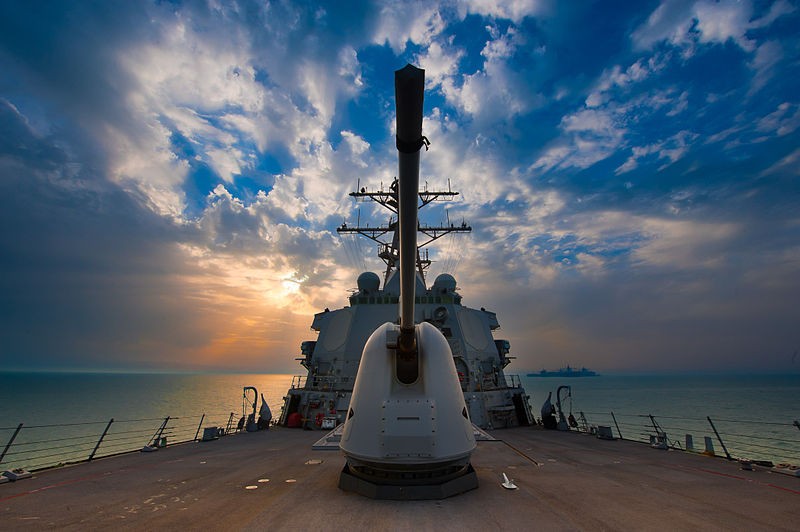 TAIPE (Taiwan News) – Tensions in the South China Sea continue to simmer, with the U.S. military to begin taking a tougher stance on protecting freedom of navigation in the region, according to U.S. Secretary of Defense Jim Mattis.

Mattis said, the U.S. will maintain a “steady drum beat” in the South China Sea to “confront” China for actions that Washington deems to “be out of step with international law” and international tribunal rulings.

The Secretary spoke to the media on Tuesday, May 29 on his way to a conference in Singapore, stating that China is creating conflict in the region and has not abided by promises to avoid militarization of the islands.

The statement comes only days after recent news that two American naval vessels, the USS Higgins, a destroyer class ship, and the cruiser class USS Antietam, sailed within 12 nautical miles of the Paracel Island chain on May 27. China claims the Paracel islands and surrounding features as its own territory. When the U.S. ship sailed through the territory the Chinese reportedly dispatched ships and aircraft to identify the ships and to ask them to leave the area, reports CNA.

However, Mattis's statements, taken as an indirect response to Beijing, argues that Beijing is the one who is in violation of international law, as UN tribunals have on repeated occasions ruled against territorial claims of what China calls the cow’s tongue or the nine-dash line, a presumptuous assertion that the entire South China Sea is Chinese territory.

Another recent element adding tension to region is the dispute between China and the Philippines regarding the Scarborough Shoal. On May 29, it was reported that Philippine’s President Duterte had “drawn a red line” for China, threatening to go to war if China engages in development projects on or around the features.

The statement is in stark contrast to recent actions and attitudes of the Filipino leader regarding China, with many in the Philippines very unhappy with what had, until yesterday, appeared to be a Beijing-friendly attitude of the administration.

China in recent weeks has installed anti-ship missiles, surface-to-air missile platforms, and electronic jamming equipment to its bases in the Spratly Island chain, which caused has caused concern throughout the region. The White House stated previously that China would face consequences for the installations. AP reports it was these weapons platforms which prompted the U.S. to disinvite China from the annual RIMPAC naval exercises, a series of cooperative international exercises led by the U.S.

As China claims lays claim to the entire region, which over 60 percent of China’s trade passes through, Beijing says it is within China’s right to militarize the region. They suggest that U.S. ships in the area “infringe upon China’s sovereignty” and threaten peace in the region.

However, from the perspective of the U.S. and the other nations bordering the South China Sea, freedom of navigation on the busiest sea lanes in the world is crucial to maintaining free and equitable trade, and economic stability.

Therefore, the regional community rightly views Beijing’s attempts to throttle the flow of goods using mafioso style military checkpoints throughout the region, as the true source of regional instability, and the largest threat to peace.

As Mattis states, there’s “only one country” that seems to be resentful of, and emphasize its opposition to, the maintenance of free and open trade lanes.

As Beijing stamps its foot in protest after each of the U.S.’s “freedom of navigation” exercises, which are sure to continue, and countries like the Philippines and Vietnam grow increasingly apprehensive of China’s activity in the region, it seems the potential for military conflict grows with each passing day.

However, some observers argue against the idea that China is actually capable of defending the territory, asserting that in the event of a full scale military confrontation, the military installations and weapons platforms in the South China Sea would be of little use.

The US Sec. of Defense Mattis's statement that the US will confront China in the region, indicates that the US is prepared to put a check on Beijing's program of militarization.

Political analyst and youtuber Black Pigeon Speaks explains why the investment that China is making to militarize the region is only useful for psychological and propagandistic purposes, and would serve almost no strategic value if directly challenged by the U.S. military.