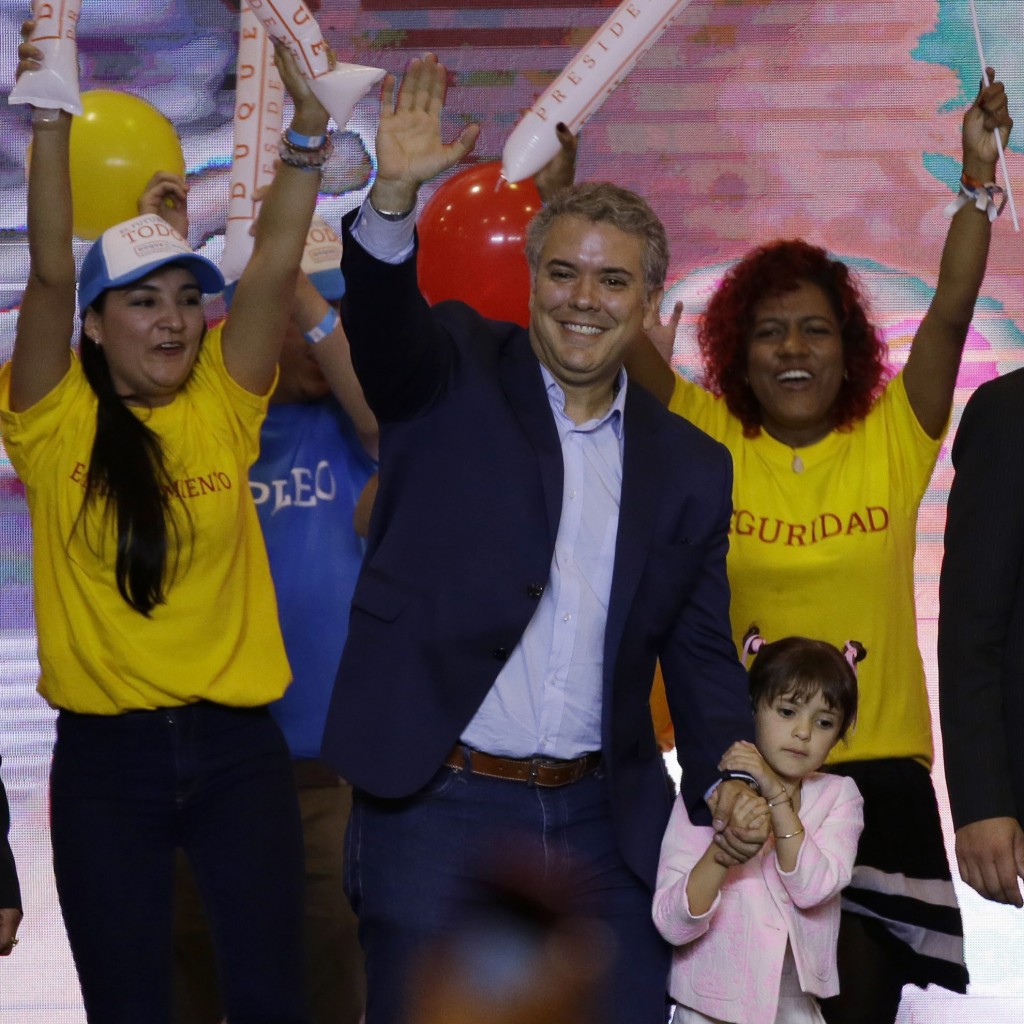 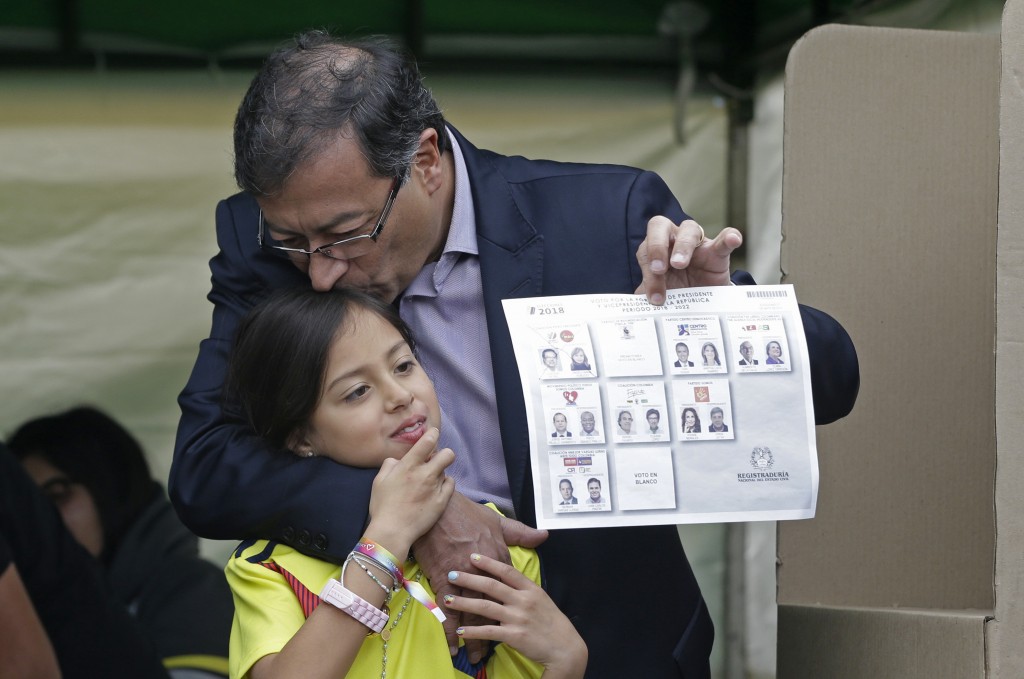 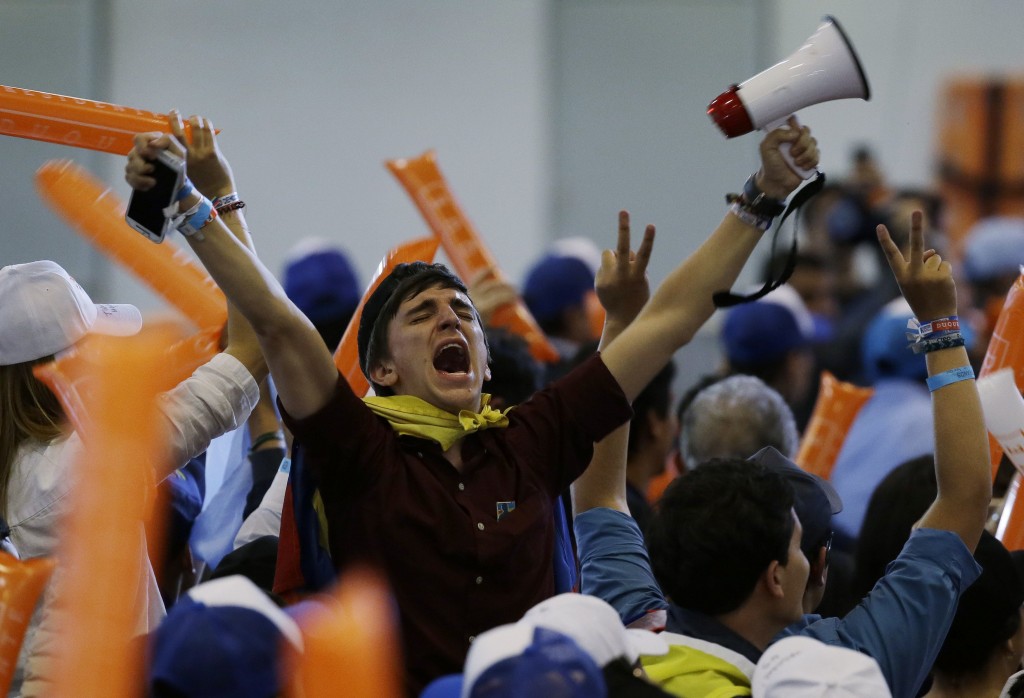 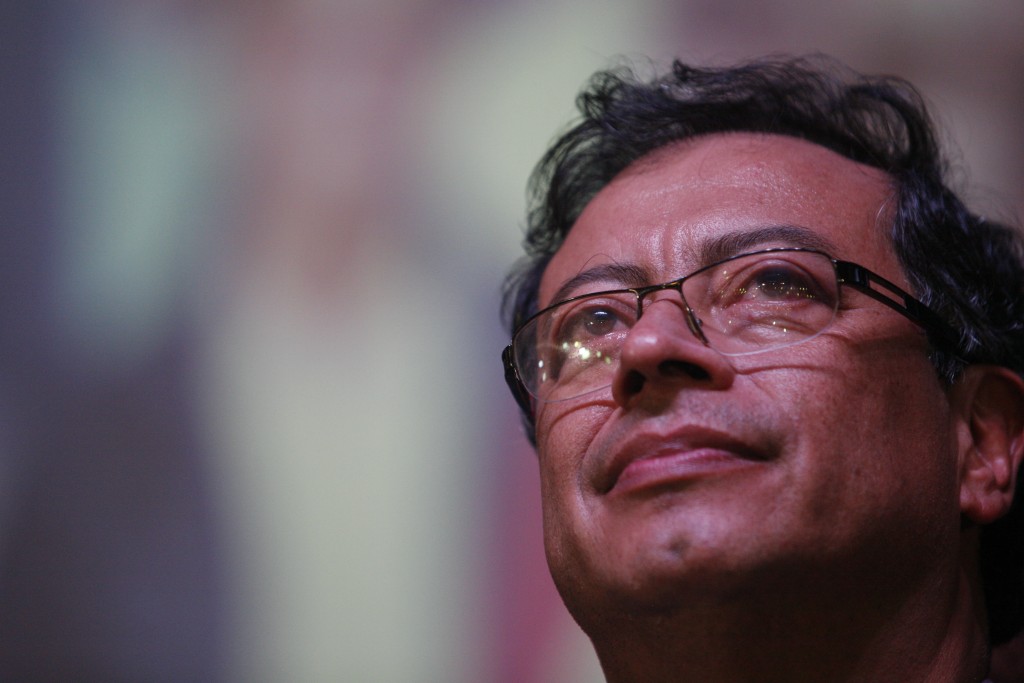 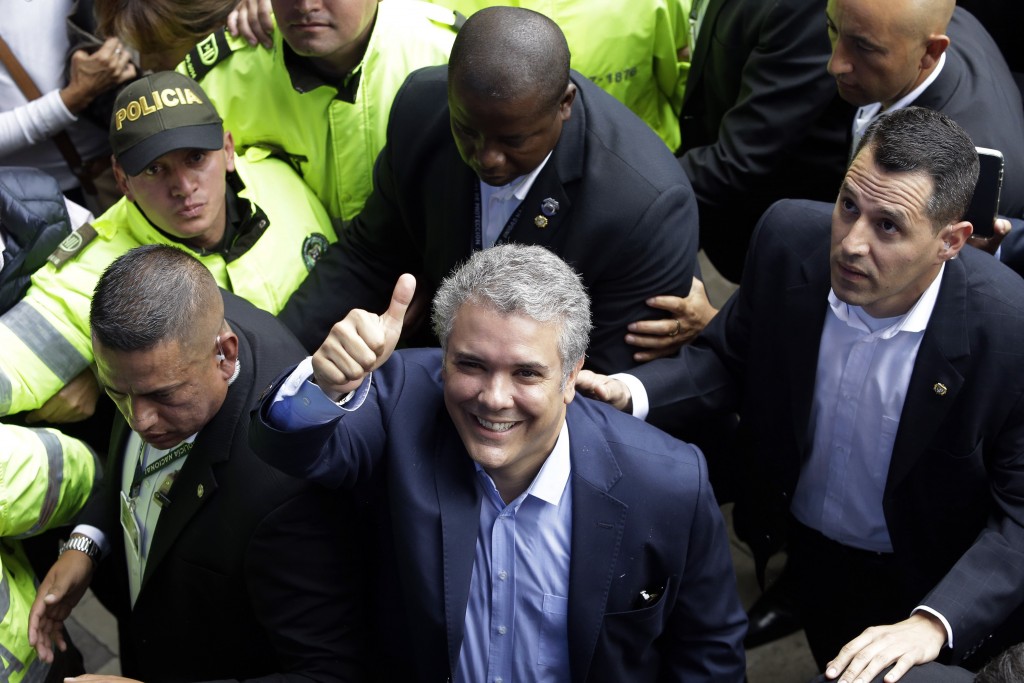 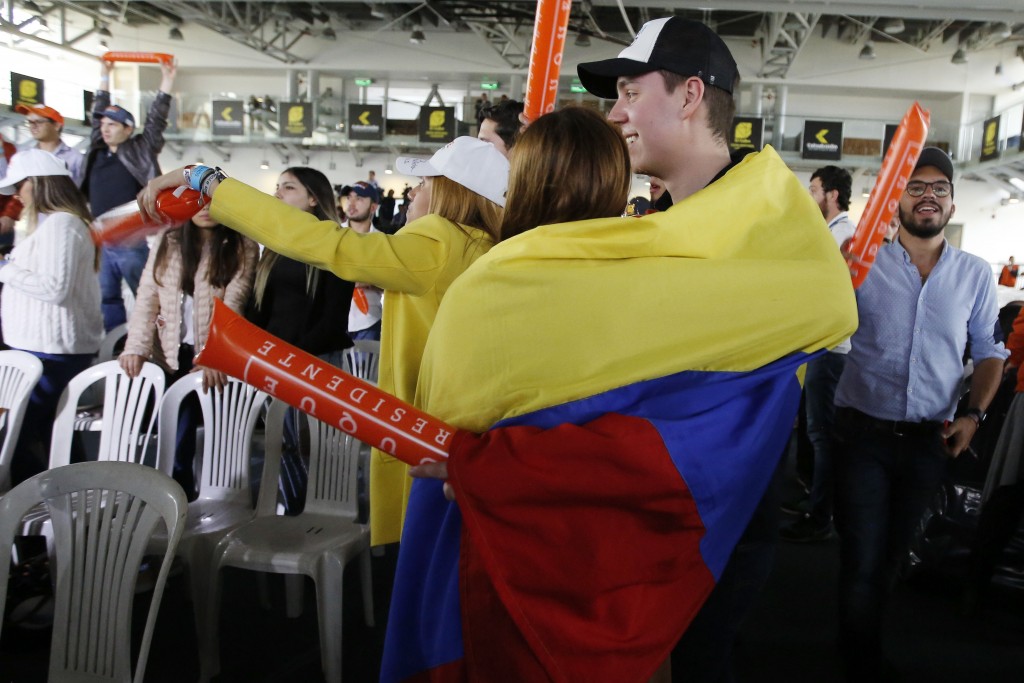 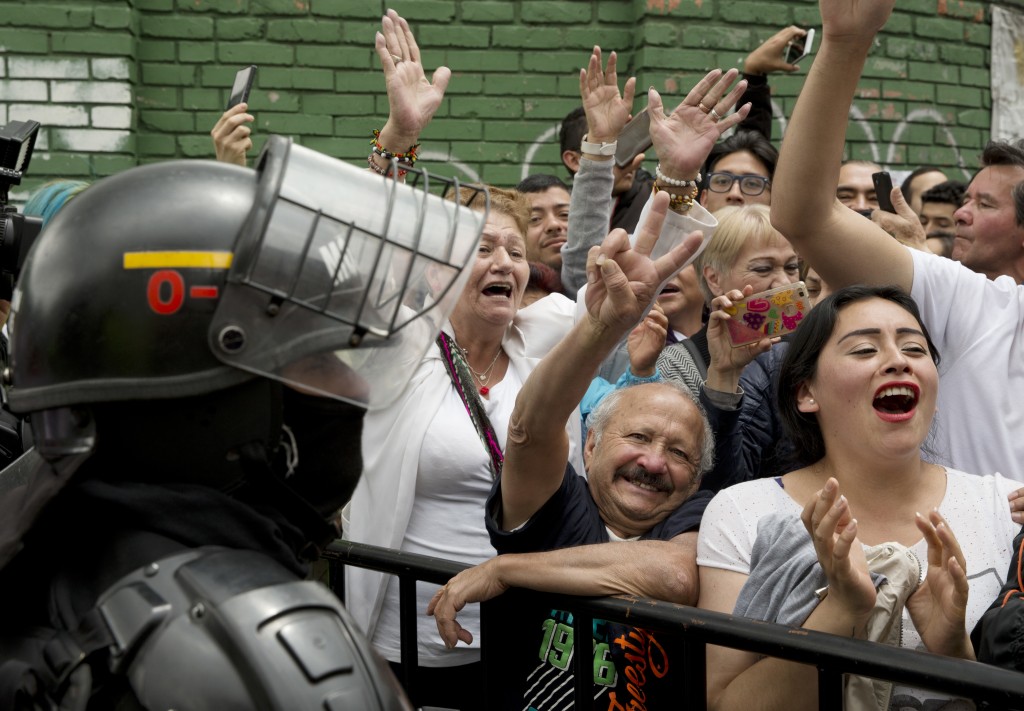 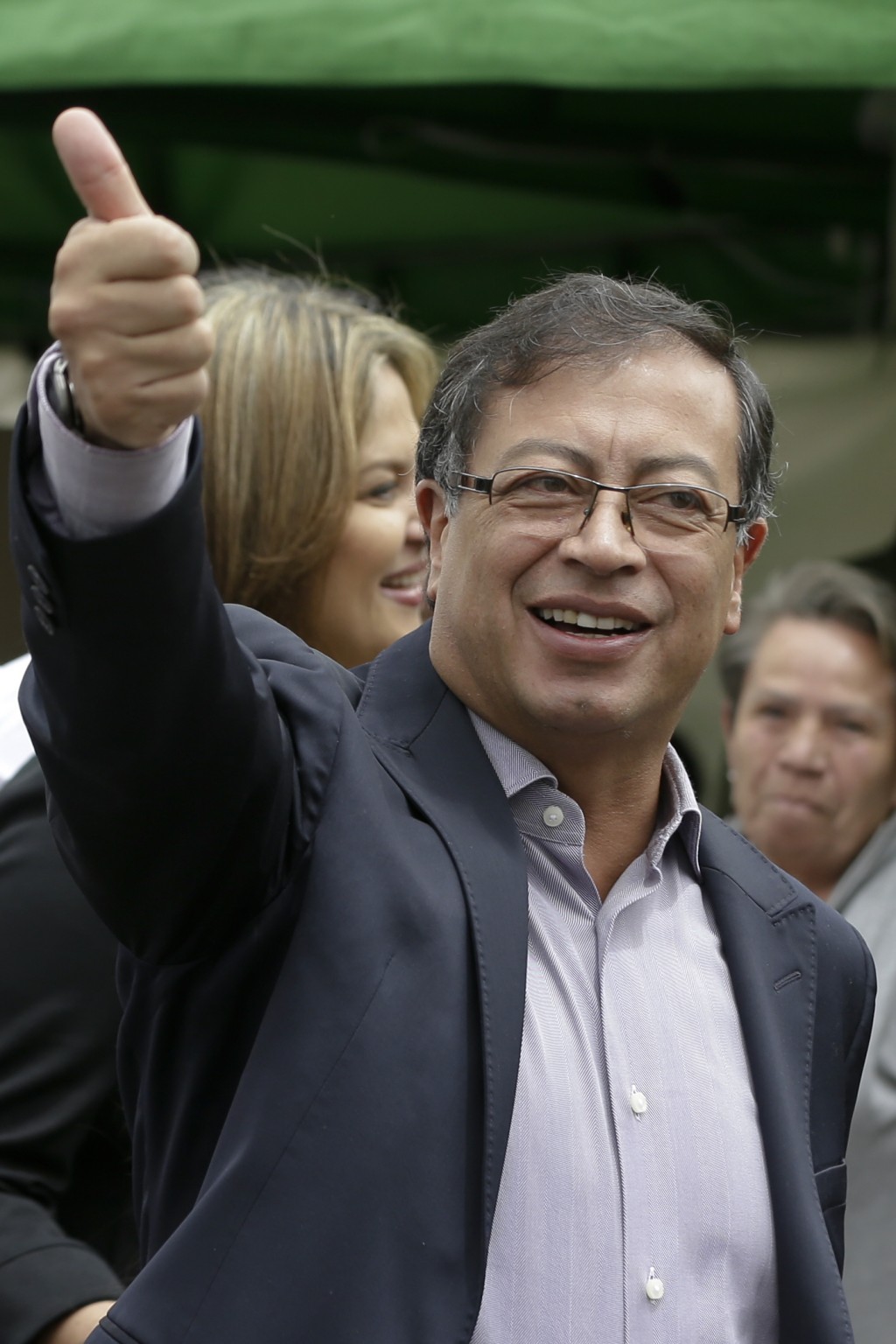 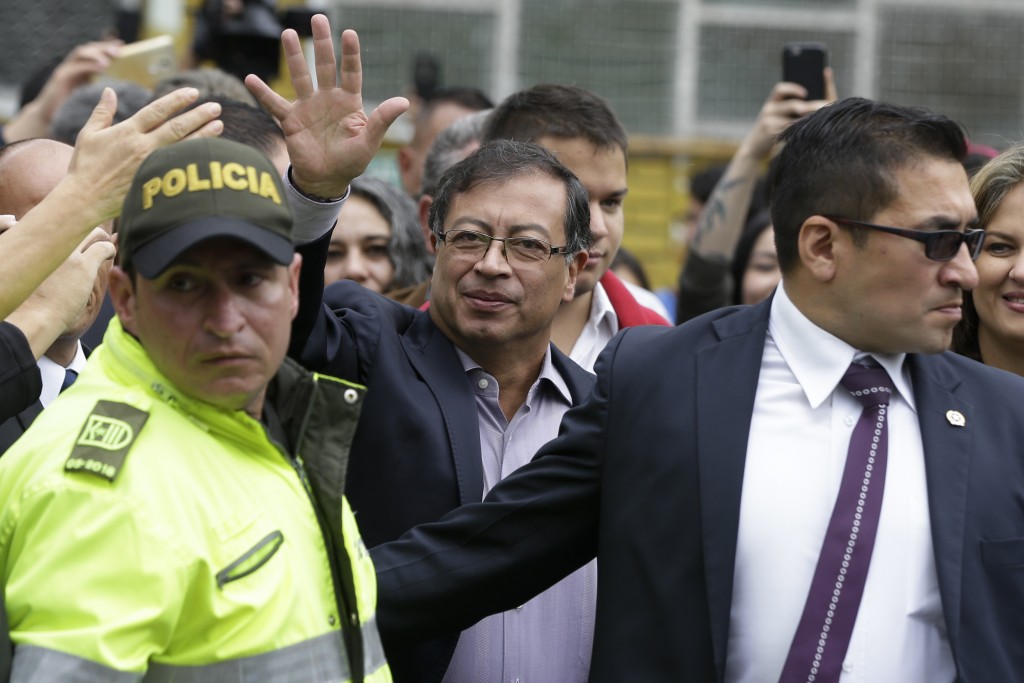 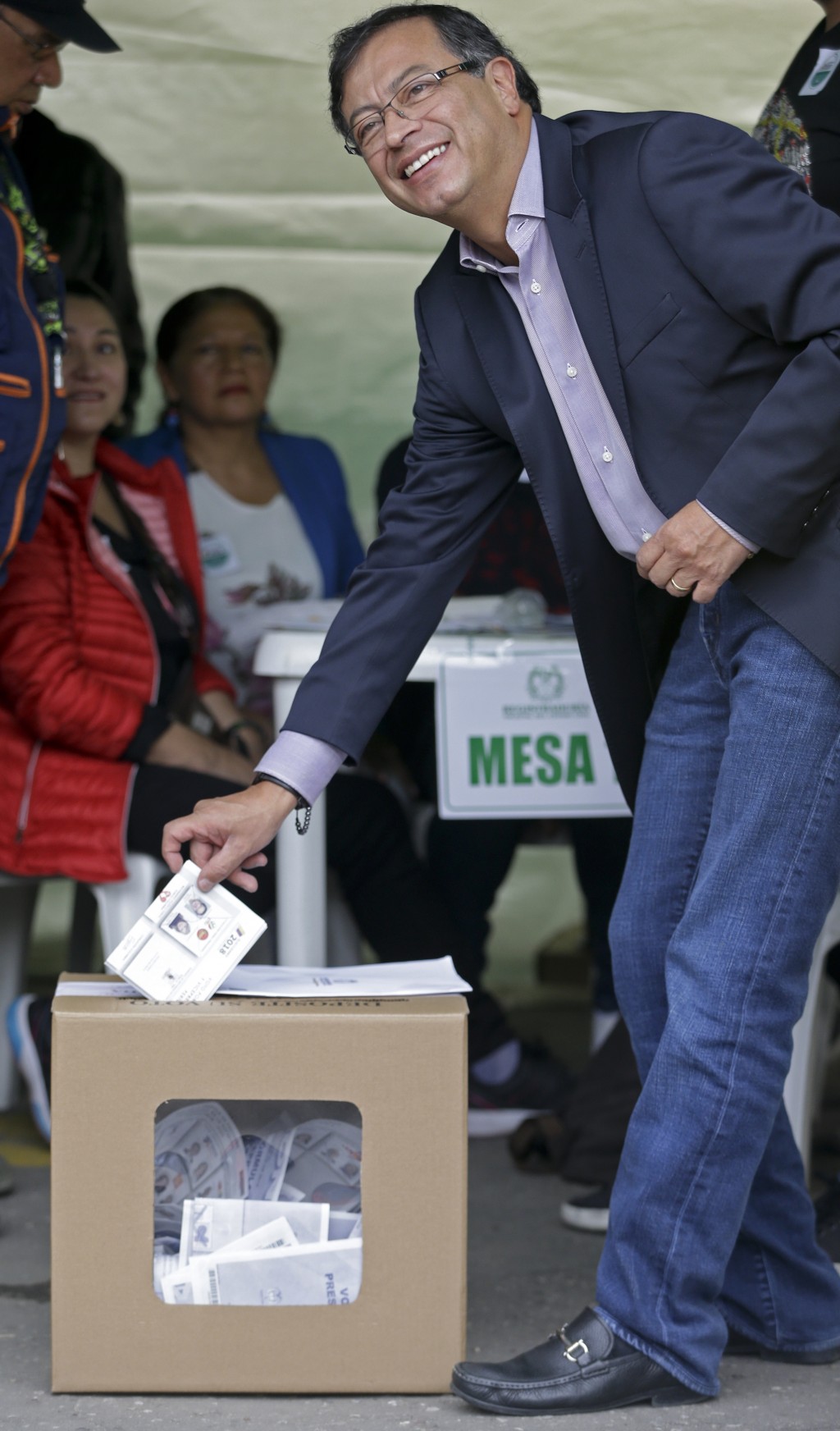 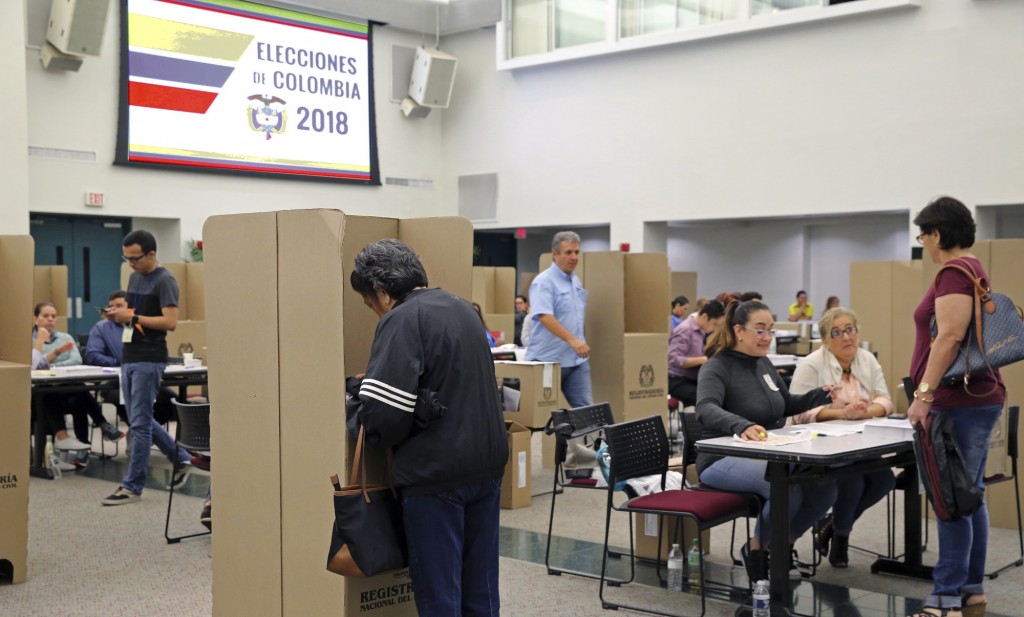 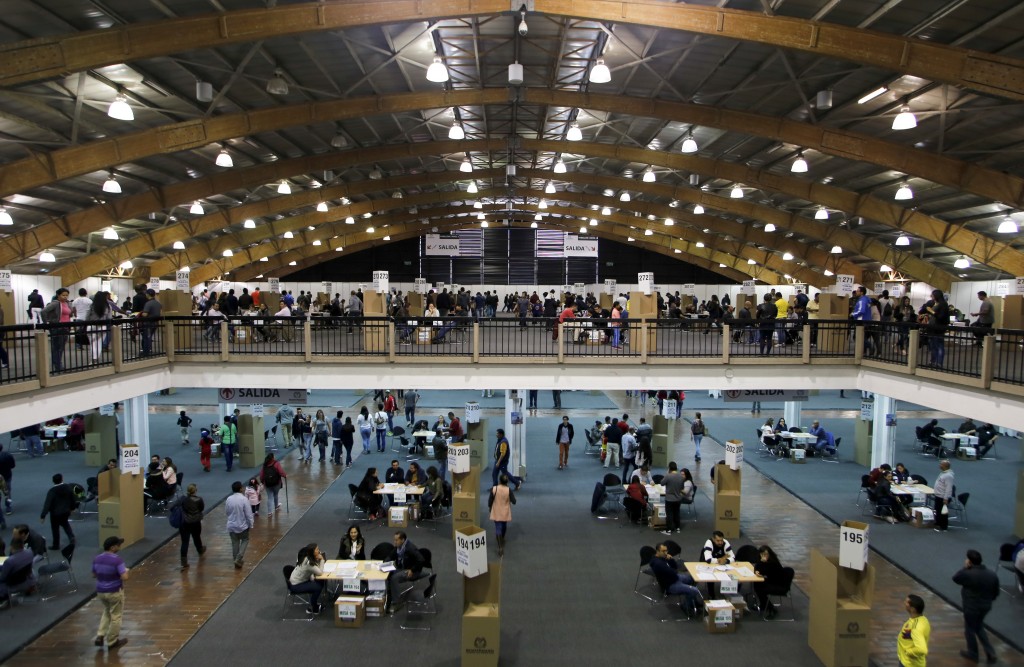 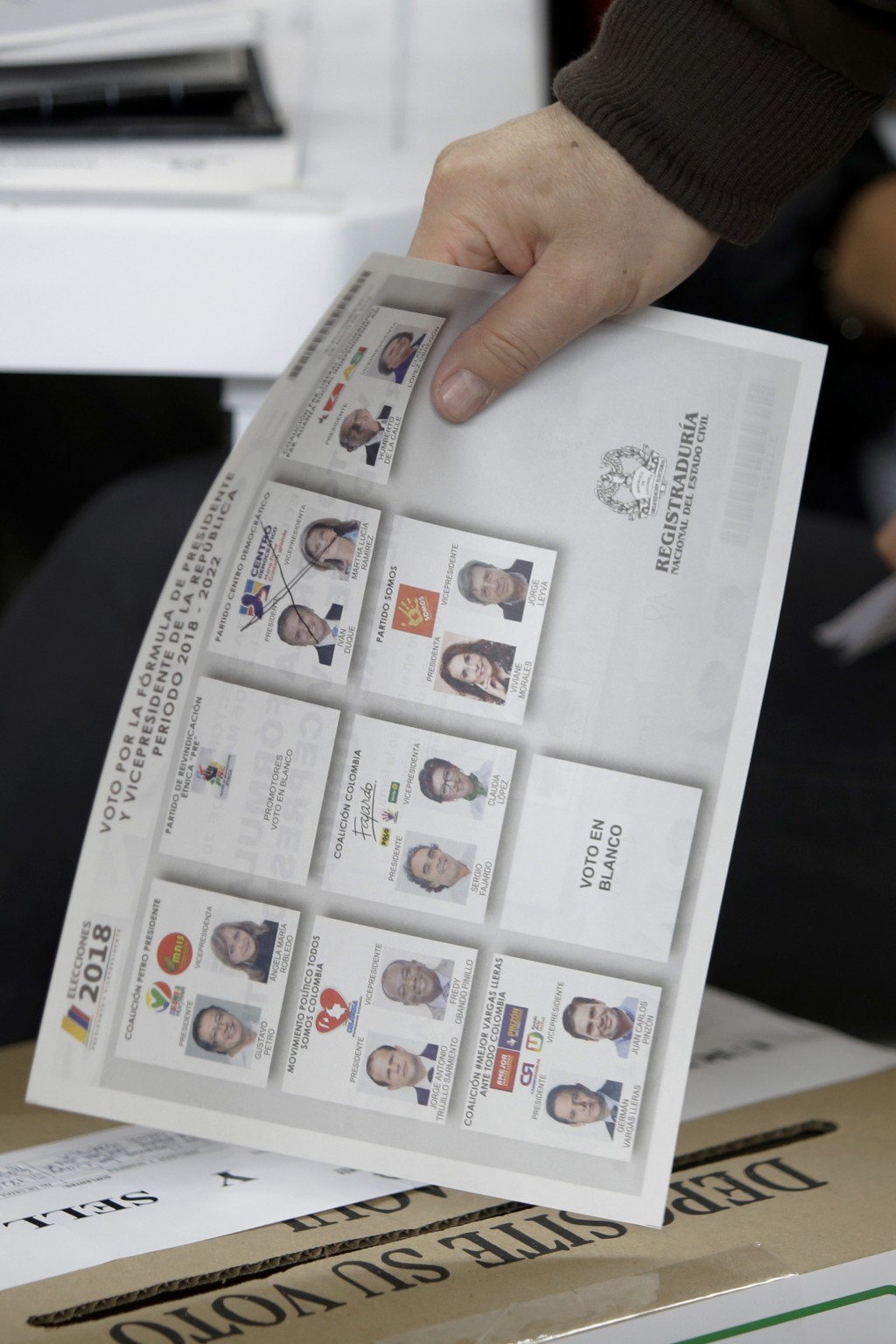 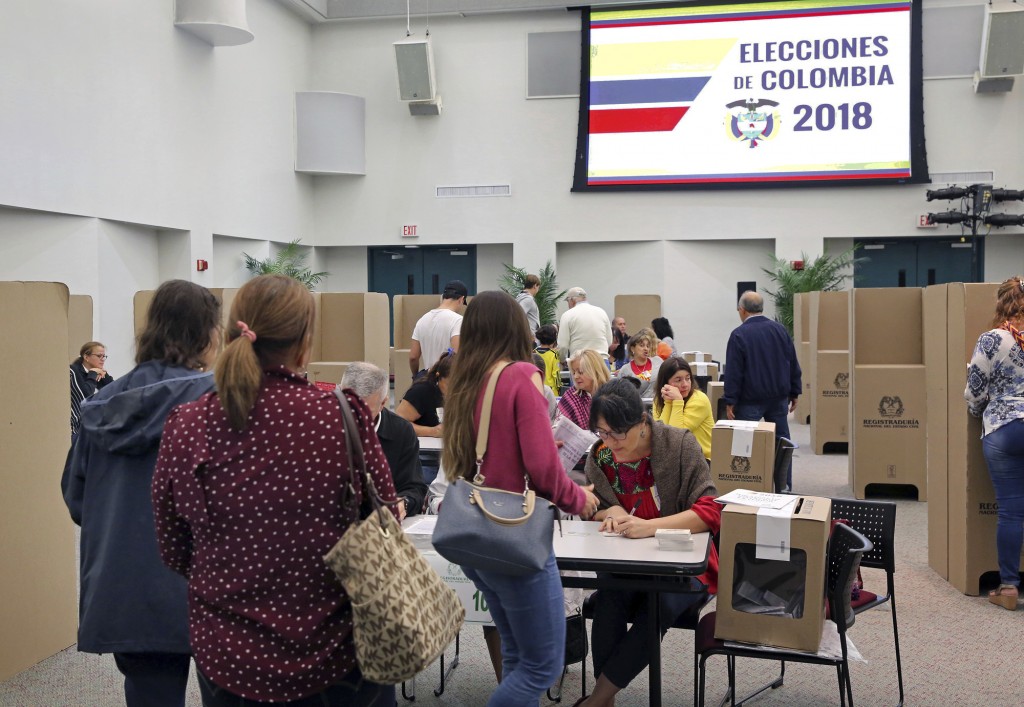 BOGOTA, Colombia (AP) — Colombia's presidential election is heading into a divisive runoff between two ideological opposites as the conservative first-place finisher in Sunday's voting took a hard line against the country's peace deal while his rival pledged to champion the poor and excluded.

The showdown between Duque and Petro could have broad implications for the nation's peace agreement ending more than five decades of armed conflict that left at least 250,000 dead, 60,000 missing and more than 7 million displaced.

Duque is vowing to modify the polarizing accord with changes to ensure that drug trafficking is not an amnestied crime and that guerrilla leaders who haven't made reparations to victims are barred from political office. The signed accord allows former rebels who fully confess their crimes to avoid any jail times and transform into a political party.

"We don't want to tear up the accord," Duque said in his victory speech. "What we want is for the peace of Colombia to be peace with justice."

The election has sparked fears on both the left and right, with Duque's critics cautioning that his presidency would be tantamount to a constitutionally barred third term for Alvaro Uribe, the influential former president responsible for boosting his campaign. Though hugely popular among Colombians for improving security and weakening illegal armed groups, Uribe also presided over grave human rights violations by the military.

Meanwhile, Petro and his populist "Humane Colombia" platform have drawn comparisons from critics to the late Venezuelan socialist leader Hugo Chavez, who Petro once admired. The ex-Bogota mayor brought Chavez to Colombia in 1994 shortly after the Venezuelan paratrooper was released from jail, where he was sent for staging a military coup.

Petro describes himself as a "strong adversary" of the neighboring country's current president, Nicolas Maduro, but his early ties to Chavez have dogged him throughout the campaign. His campaign likened the comparisons to fear-mongering tactics by a traditional political class no longer able to court votes based on their hardline stance against leftist rebels.

The firebrand contender supports the peace accord and has galvanized youth voters angered by deeply entrenched corruption and income inequality. Colombia has one of the region's highest levels of income inequality, ranking second only to Haiti according to one study. Petro has proposed ending Colombia's dependence on oil exports and raising taxes on vast swaths of unproductive land to boost agricultural production and bring millions out of poverty.

Critics have warned his rise could push Colombia dangerously toward the left and rattle markets in the traditionally conservative country.

In a speech before hundreds of supporters Sunday night, Petro said fears that he would turn Colombia into an authoritarian state where wealth is redistributed are unfounded. He said his proposals instead amount to a "democratization" of opportunities so that more Colombians can benefit from education and join the middle class.

"The nearly 5 million votes we received today are the votes of the youth, of excluded sectors far and wide across Colombia who have decided to burst in and say, 'We are present,'" he said to cheers and applause.

Supporters waved flags emblazoned with the Soviet Union's hammer and sickle and the logo of the disbanded M-19 rebel group that Petro belonged to in his youth.

Edilia Pinzon, 55, was among those cheering on Petro.

"We are making history," said Pinzon, a street merchant. "The others who have reached power haven't fulfilled their promises, especially to those of us with few means."

More than 19 million voters cast ballots in the election, the highest turnout in two decades.

The results were especially harsh for Fajardo, who tried unsuccessfully for weeks to form an alliance with like-minded centrist Humberto de la Calle, whose 2 percent vote haul would've been enough to push Fajardo past Petro.

Fajardo conceded defeat but showed no sign of who he'll support in a runoff where his 4.5 million supporters are likely to be decisive.

"This is the worst scenario possible," said Monica Mendez, a chemical engineer who voted for Fajardo and said she was crushed over the result.

Mendez said she was considering casting a blank ballot in the next round, dismissing Petro as an egoistic leader who doesn't listen to opinions different from his own and Duque as a mere placeholder for his mentor, Uribe, "another person who is arrogant and power hungry."

Petro and Duque differ on almost every critical issue facing Colombia: Duque favors forcibly eradicating coca crops that have skyrocketed to record levels, whereas Petro favors substitution. Historically tight relations between the U.S. and Colombia would likely remain unchanged under a Duque presidency, whereas Petro has called U.S. assistance to Colombia "help that has served for nothing."

In a victory speech to supporters little changed from his regular campaign stump, Duque stressed law and order issues that are red meat to his conservative base. But he also appeared to make some overtures toward moderate voters, saying he wants to be the president "who unites our country and not govern with a rearview mirror."

Ramiro Bejarano, a columnist for El Espectador newspaper, said that both candidates have no choice but to look for votes in the political center.

But he sees Duque's more-divisive discourse, with its focus on hot-button issues like abortion and gay rights, as well as his criticisms of the peace process, proving a harder sell to the mass of independent voters who preferred Fajardo.

Still, he said Duque's 14-point advantage will be hard to surmount for Petro, whose main challenge is to convince voters he won't convert Colombia into another Venezuela.

"If he manages to overcome the fear factor he can win," Bejarano said.

De la Calle, the government's chief negotiator with the FARC, without specifically endorsing Petro, made an impassioned plea not to backtrack on implementation of the peace accord when a future free of armed conflict is within reach.

"The war brought us together during eight years," he said. "And now peace is dividing us."