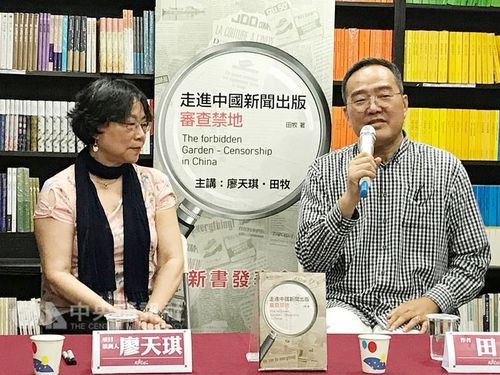 TAIPEI (CNA) -- Taiwan is the last fortress of democracy and free speech of the Chinese-speaking world, exiled Chinese writer Pan Yongzhong (潘永忠) said at a book launch in Taipei on Saturday.

Pan, better known by the pseudonym Tian Mu (田牧), said the Chinese Communist Party (CCP) has essentially cut off all Chinese-speaking channels to the outside world so that there can be no understanding of the Taiwan government or its voice of justice and conscience.

China's sharp power in the world is pervasive, Tian Mu said at the launch of his new book "The Forbidden Garden -- Censorship in China."

However, he said, not all of the 40 million overseas Chinese support Beijing's policies, and many of them care a lot about the future of Taiwan.

In particular, dissidents in exile "hope that Taiwan will stand firm" against the pressure, Tian Mu said.

The existence of Taiwan's political system, model and values puts pressure on the CCP's despotism, he said.

Also speaking at the book launch, Tienchi Martin-Liao (廖天琪), director of the Independent Chinese PEN Center (ICPC), suggested that Taiwan use its wisdom and soft power to break through Beijing's lockdown.

Taiwan can speak up for itself internationally through its non-governmental groups and overseas civil organizations and social media, she added.