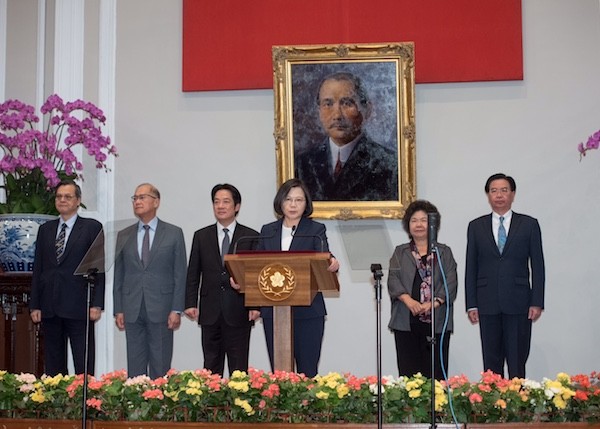 In her strongly-worded remarks, President Tsai said the diplomatic pressure campaigns and actions from Beijing “fully demonstrate the anxiety and lack of confidence of the Chinese government.”

The president ascribed such a campaign to the fact that Taiwan had been achieving actual progress with the U.S. and other like-minded countries in areas of economy and security over the past few years.

“The series of outrageous maneuvers from China intended to undermine Taiwan’s sovereignty has crossed a bottom line for Taiwanese society,” emphasized President Tsai.

“We will no longer tolerate (such actions). We will only be more determined in efforts to connect with the world and establish meaningful partnership with like-minded countries,” continued the president.

The president also warned that the hostility demonstrated by Beijing would not contribute to the improvement of cross-strait relations, nor would it improve the international image of China or dissolve doubts held against the Chinese authorities.

Finishing her brief five-minute talk, President Tsai turned to shake hands with each of the top officials standing behind her before leaving without taking any questions from the press.

Having lost two diplomatic allies after assuming the position of foreign minister at the end of February, Wu confirmed at an earlier press conference held at the Ministry of Foreign Affairs that he had tendered his resignation to the President as to take political responsibility.

However, as of publication, there has been no response from the Presidential Office.

The African nation Burkina Faso announced Thursday evening it had cut diplomatic ties with Taiwan. Its foreign ministry released a statement without directly mentioning China as part of the reason for its rupture with Taiwan. It says instead, “This decision is guided by the firm desire of the government of Burkina Faso to defend the interests of Burkina Faso and its people in the concert of nations.”

Burkina Faso marks the fourth country that has ditched Taiwan in favor of China after President Tsai took office in 2016, following São Tomé and Príncipe, Panama, and the Dominican Republic.

Taiwan is now left with 18 allies in the world, most of which are impoverished nations located in Latin American or the Pacific region.