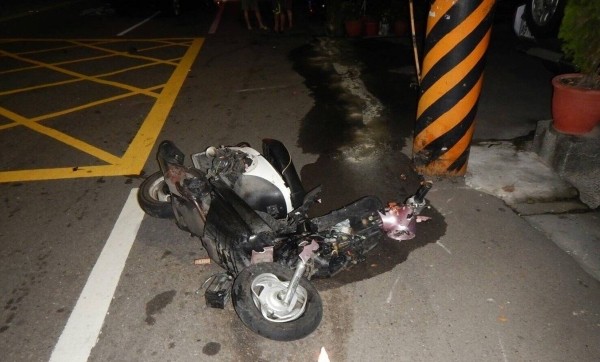 TAIPEI (Taiwan News) -- A young couple perished yesterday when a Mercedes Benz going the wrong way smashed into the scooter they were riding in Taichung city on May 15, just 10 days shy of the woman's 20th birthday, reported Apple Daily.

When riding a scooter on May 15 in Taichung City's rural Waipu District, 19-year-old female, Wang Ya-ching (王雅靜), and her 24-year-old boyfriend Chen Yu-lin (陳郁霖) were struck by a Mercedes Benz when its driver, a 44-year-old painter surnamed Tsai (蔡), suddenly swerved into their lane. The impact of the collision with the Mercedes was so great that the couple were reportedly sent flying to a height equivalent to a one story building, causing them to suffer fatal injuries.

Showing remorse, Tsai confessed to police that he was very tired from work and he had nodded off, causing his car to swerve into the oncoming lane that Wang and Chen were riding in. Police are charging Tsai with negligent homicide, which carries a maximum sentence of two years in prison. Wang's father said that his daughter was the youngest child in the family, but she had actually already been through two unhappy marriages and worked at a betel nut stand to make a living. He said that she started dating Chen about three or four months ago.

Chen's mother said that she was very sad about the tragic accident and denied that there was a wedding being planned for the deceased couple. Instead, she said she was focused on managing the funeral arrangements for her son and helping him rest in peace.

Wang's father said she had been married twice before and had one daughter from one of the marriages. He said that the family of his daughter's ex-husband had mistreated his granddaughter, and therefore they decided to take the child to his home to care for her.

Wang's father said that Chen would often take his daughter out to spend time with friends and that the two seemed to have a good relationship.

Sadly, just 10 days before her birthday, she suffered this catastrophe, depriving the mother a chance of ever seeing her young daughter again.