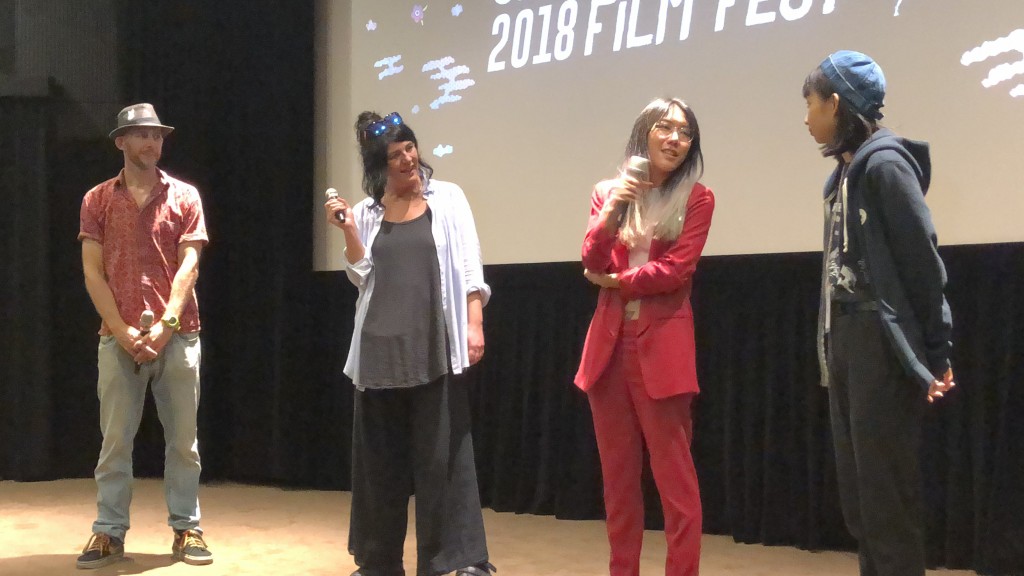 TAIPEI (Taiwan News) – The Urban Nomad Film Fest began Thursday with the Taiwan premier screening of"Here To Be Heard: The Story of The Slits."

Jennifer Shagawat, the executive producer of the film, visited Taipei for the Urban Nomad Film Fest and participated in Q&A sessions for both film screenings Thursday and Saturday.

"Here To Be Heard: The Story of The Slits" is an independent film directed by Bill Badgley, which is premiering in Taiwan for the the first time. It depicts the forming and journey of the English punk rock group, The Slits.

Shagawat said of director Bill Badgley, “I think he did them justice and I hope you think so too, because it’s a important story. Like Viv Goldman said of The Slits, ‘Erased from history,’ and that happens to people all the time. I’m really glad we got to compete the project.” This film incorporated raw footage dating all the way back to their formation in the late 1970s and recent individual interviews with band members, other punk rock musicians, like members from The Clash, DJ/musician Don Letts and many others who had the opportunity to be impacted by The Slits.

"(Bill) was able to make a great film, because it’s a 40-year timeline and it’s important to keep that information in line, and he was able to do that.”

The Slits was about paving their own path and walking it during a time in which women were expected to “fall in line,” be prim and proper, and follow societal rules and norms expected of women in 1970s England.

The Slits changed the landscape of punk rock music by making music they believed in and performing how they wanted, regardless of what society said they should do. “I think they were just ahead of their time,” said Shagawat.

But they were revolutionary and redefining the meaning of being a woman, as the media and men of the 1970s and 80s were afraid of them because they broke the rules, defying what it meant to be female in the Western world.

Throughout their early years, The Slits faced much criticism and a backlash, especially from men and the media. Shagawat said that she believed that "some of the men were angry for their existence, and changing the image of 'woman.'"

However, they were not men-haters, they even had a male drummer throughout its tenure, but they did not like misogyny and the negative impact it had on women, especially how it impacted them as a band. During Saturday’s Q&A, Taiwanese punk rock artist Kao Hsiao-kao (高小糕) asked Shagawat about how to balance being an artist and being a feminist, saying that many people try to discourage her from being involved in feminist activities. "When people say you should stick with the music, and not do feminist things," said Kao.

Kao recounted the time when her band threw unused tampons at the news media in response to the way they depicted and objectified the women who were participating in the 2014 Sunflower Movement student protest.

Shagawat said to Kao, "You’re a woman and you’re strong, So that’s like saying to change who you are." "In the movie, Palm Olive said 'Be true to yourself.' So I think when anyone judges you, even though it’s hard, you just have to really be true to yourself."

Shagawat was the road manager of The Slits during their American road tour in 2007. During this time, she and Ari videotaped most of their tour, the good, the wild, and the ugly.

They documented what eventually were some of the lead singer’s, Ari Up, last days performing; she later passed away in 2010. "Ari and I were putting together a film, which was basically 'a psychedelic mess.'"

Shagawat recounted personal stories of her time with the band, interactions with the late Ari Up, and the importance of telling the story of the Slits. The death of Ari brought all the people involved with The Slits closer together, because she was the link that glued everyone together, a group of very different women, through music and purpose.

"Tonight, I got pretty emotional watching the movie." "Like we said in the movie about Ari, she really pushes you." Tonight, "Metal Politics Taiwan" will premier with a Q&A with the German director Macro Wilms and Taiwan legislature member Freddy Lim will be in attendance.

For more information on Jennifer Shagawat, go to the official page for her music label Star Cleaner.