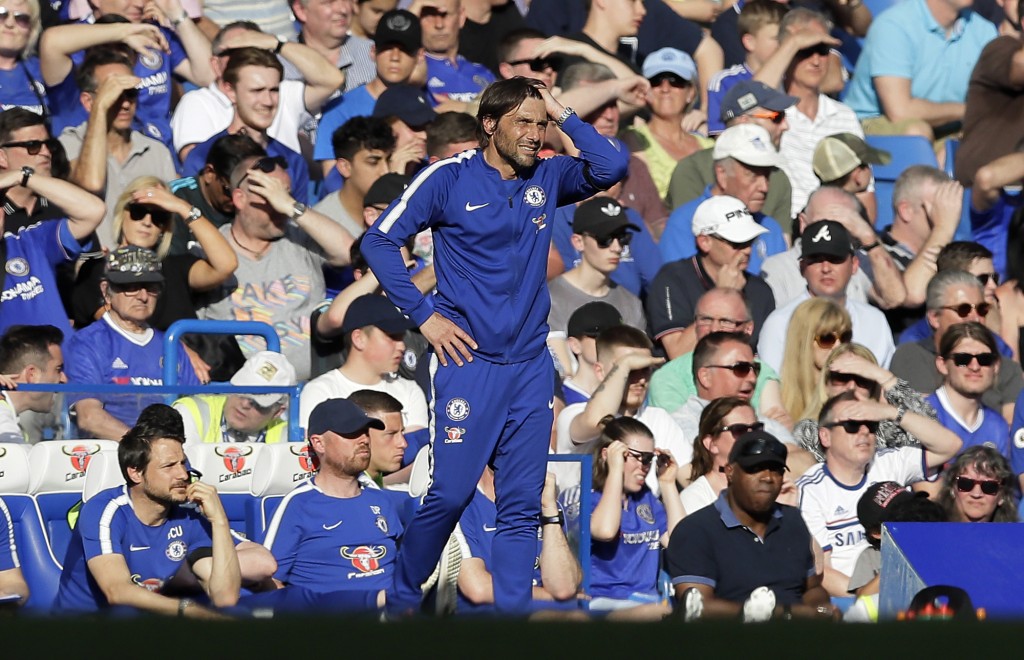 LONDON (AP) — Chelsea produced a lackluster Premier League title defense this season and the last thing the players want is to sign off the campaign, and in all probability Antonio Conte's reign as manager, with a second consecutive FA Cup final defeat.

Motivation will be sky high, for more reasons than one, when Chelsea takes on the most successful coach in its history, Jose Mourinho, and his Manchester United side at Wembley on Saturday.

"You don't want to be on the back of losing two FA Cup finals in a row," midfield playmaker Cesc Fabregas said. "Last year we didn't play well. Arsenal were on top of us and I think they deserved to win.

"It would've been a fantastic season winning the double. We have this regret in our head and we want to make it right this time for sure."

Media speculation has been rife for several months that Conte will leave Chelsea at the end of the campaign.

The former Italy coach has appeared to be at odds with the club's board all season and a disappointing fifth-place finish in the league has done little to appease him or his employers.

Conte was also involved in a much-publicized spat with Mourinho, who won the league three times in two spells with Chelsea, earlier this season although the pair now seem to have resolved their differences.

The Chelsea hierarchy will be desperate to avoid the embarrassment of being on the receiving end of a defeat by Mourinho in Saturday's showpiece occasion after having fired the charismatic Portuguese coach for the second time in December 2015.

Mourinho guided United to a second-place finish in the league this season, his second term in charge, and will be intent on putting one over his old club by adding the FA Cup to last year's League Cup and Europa League title triumphs.

Young midfielder Scott McTominay said United's players are also driven by the desire to win the FA Cup for their former manager Alex Ferguson, who is recovering from a brain haemorrhage.

'We really want to do it for Sir Alex Ferguson as he's obviously not so well," McTominay said. "It's so important to bring home the silverware for him.

"It's so important after a long season. It hasn't quite gone to plan in the league and other cup competitions."

McTominay, who only broke into the team a year ago, was not involved when United beat Crystal Palace 2-1 in the 2016 final.

"To see Jesse Lingard score that (winning) goal was incredible and it was obviously a moment that him and all of the fans will never forget," McTominay said.

"As a player you have to take as much in as possible and see how the players prepare for the game, particularly the players in your position, just to see how the team chemistry gets going because it's such a big day.

"Wembley is such an amazing stadium, it's the home of English football. It's a place where you want to showcase your skills and go out to do your best for the team."