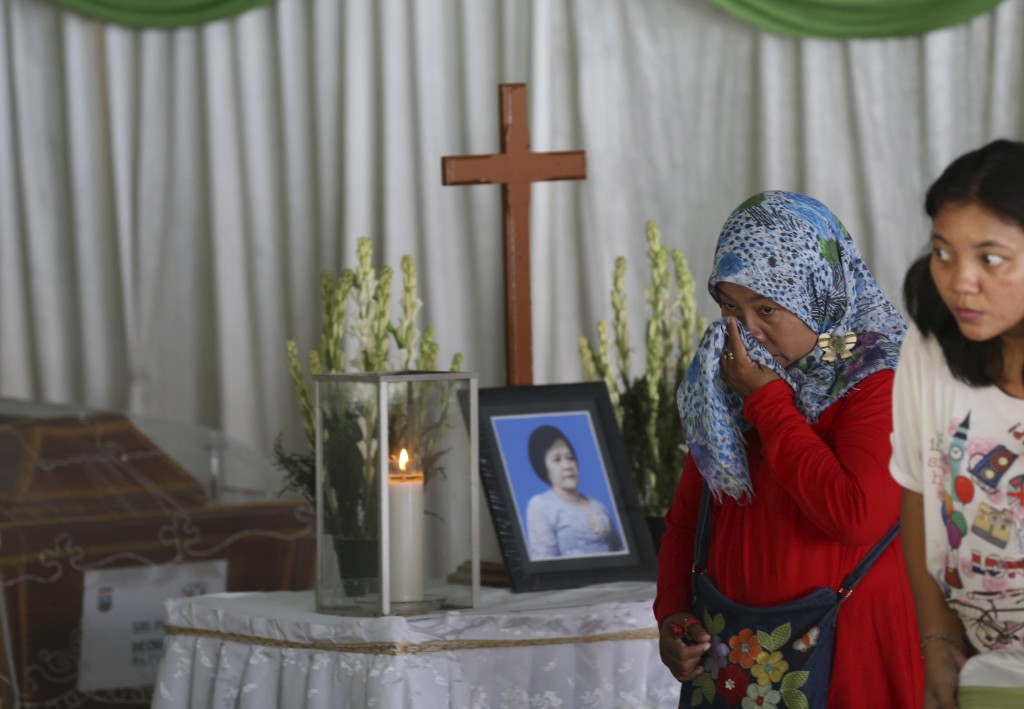 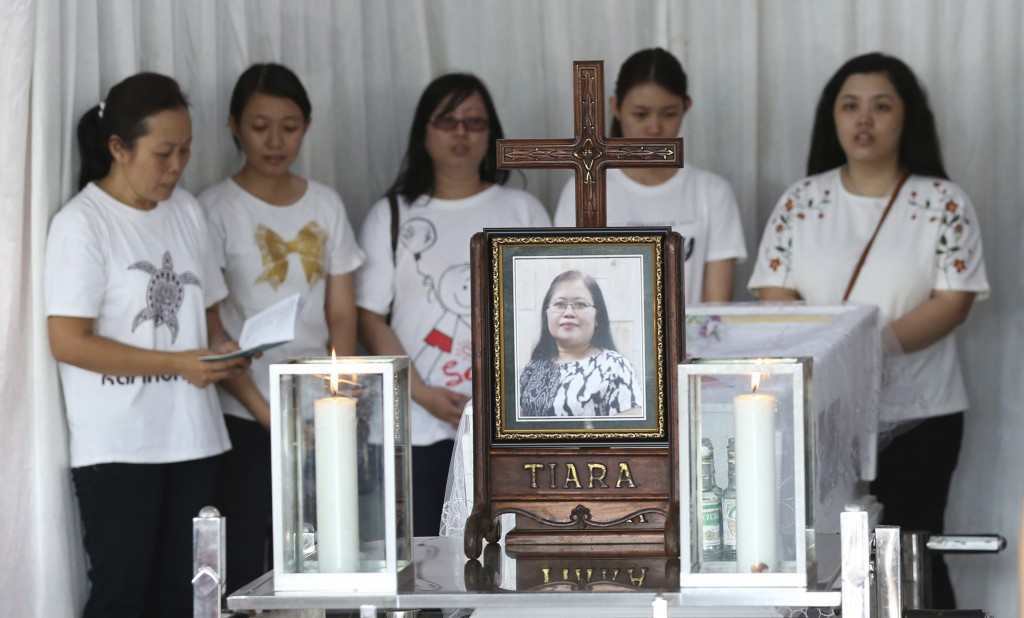 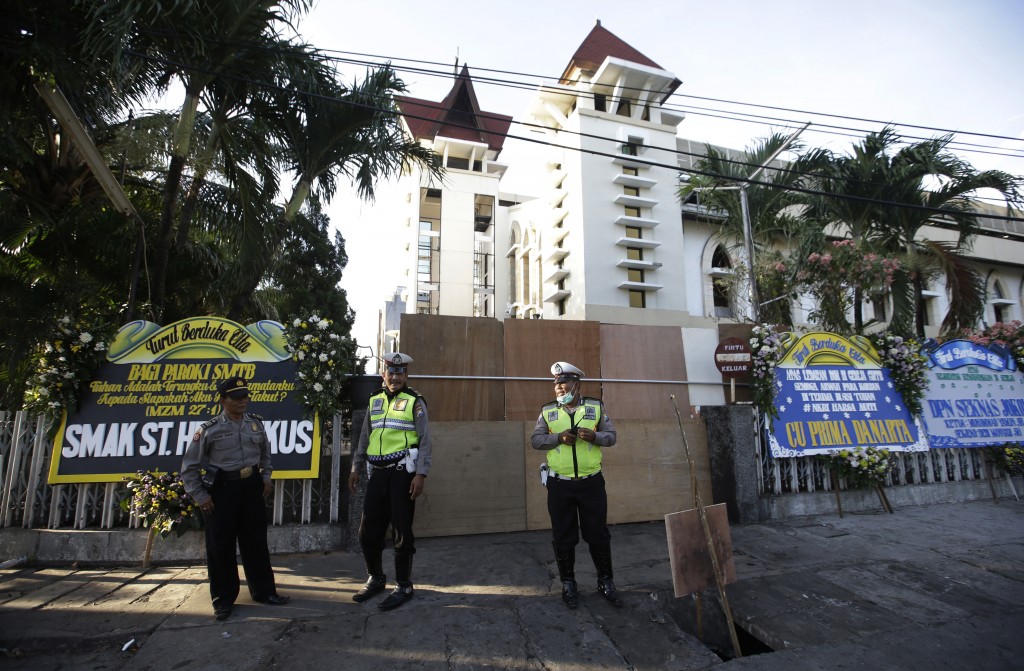 SURABAYA, Indonesia (AP) — The Muslim family that carried out suicide attacks on three churches in Indonesia's second-largest city, killing a dozen people as well as its two young daughters, lived comfortably in an upper-middle class suburb and was on friendly terms with a Christian neighbor.

The coordinated bombings on Sunday, followed on Monday by a suicide attack by another family on police headquarters in Surabaya, have horrified Indonesians who typically see their Muslim-majority country as diverse and tolerant.

Neighbors say there were no obvious signs the family was radicalized. They had lived in the leafy Wonorejo Asri residential community since 2010 and had a good income from the father's business selling herbal medicines, they said.

According to police, on Sunday morning the two sons, aged 16 and 18, rode a motorcycle into a church courtyard and detonated their explosives. Puji Kuswati, the mother, attacked worshippers at another church with her daughters, aged 9 and 12, who police said were all wearing suicide vests. The father, Dita Oepriarto, detonated a car bomb outside a third church. Police initially gave his name as Dita Futrianto but corrected that based on his national identity card. All six died.

Raith Yunanto, who lives two houses from the family, said they were always welcoming to her, a minority Christian. She said she went shopping with Kuswati at the local market and they often exchanged different types of food and fruit.

"There was nothing strange about the family, they were like other devout Muslim families," she said. "Their attitude and manner of dress were just like common Muslim people."

"It's difficult for us to accept how they can commit such a barbaric act against Christians," Yunanto said. "The couple visited me when I gave birth and when my children were sick."

She said she last saw members of the family when the daughters were riding bicycles with other children in front of her house on Saturday afternoon, the day before the bombings.

The eldest son, she said, was seen coming home from school activities wearing a colourful batik shirt that's symbolic of diversity in Indonesia, a country of more than 260 million with dozens of ethnic groups and languages.

Dendri Oemiarti, Oepriarto's younger sister, was wracked with grief when she spoke to The Associated Press on Monday and said her elderly parents were in a state of shock.

"What he has done has hurt us so deeply," she said as tears flowed down her cheeks.

"What thoughts have influenced him? I do not understand. I do not know what changed my good brother to be so sadistic."

Oemiarti said she was very angry when she first heard about the church attacks and that children had been used to carry them out.

"I fainted when my sister, Dina, told me that the attack was done by our own brother," she said.

The last time she met her brother and his family was during Ramadan in 2017. She said their lives were busy and they only met about once a year and didn't talk about religion.

Police initially said the family went to Syria to join the Islamic State group but later retracted that statement.

Oepriarto, they said, was the leader of the Surabaya cell of Jemaah Anshorut Daulah, an Indonesian network of extremist groups that is affiliated with IS.

According to police, Oepriarto was friends with the family that carried out Monday's police headquarters bombing and a third family, three members of which died when homemade bombs exploded in their apartment on Sunday night.

The family's nextdoor neighbor, Abi Akbar, said Oepriarto and his sons, Yusuf and Firman, like nearly all Muslim men in the neighborhood, usually attended dawn prayers at an unremarkable local mosque.

But Akbar, 23, also said he had heard older men in the community comment that Oepriarto wasn't a mainstream Indonesian Muslim and objected to secular rituals such as raising the national flag or singing the Indonesian national anthem.

In retrospect, Akbar said, one thing was different at dawn prayers on Sunday. Instead of customarily kissing their father's hand after prayers, the boys and father hugged for a long time.

"They hugged like they were going to be separated," Akbar said. "But at that time we were not suspicious of anything because they are a family that is well known and normal."

Just a few hours later Oepriarto and his family and 12 other people were dead. More than 40 were injured.

Kenzi Tapy Gani, a 21-year-old university student who lived near the family, described Oepriatro as a "friendly and nice guy."

"We really didn't see it coming," he said.