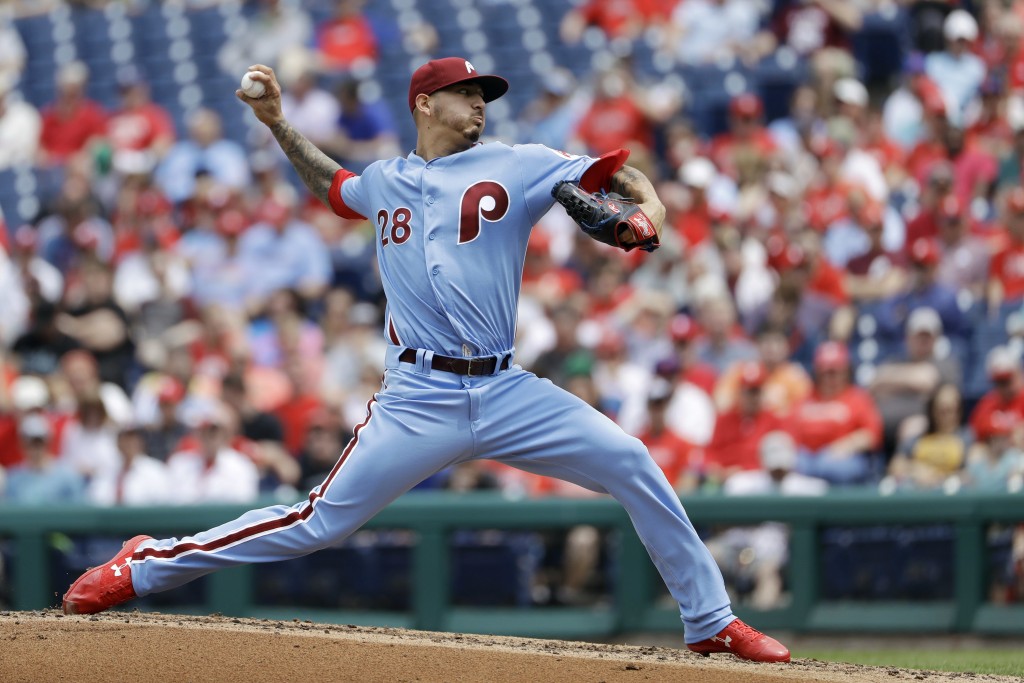 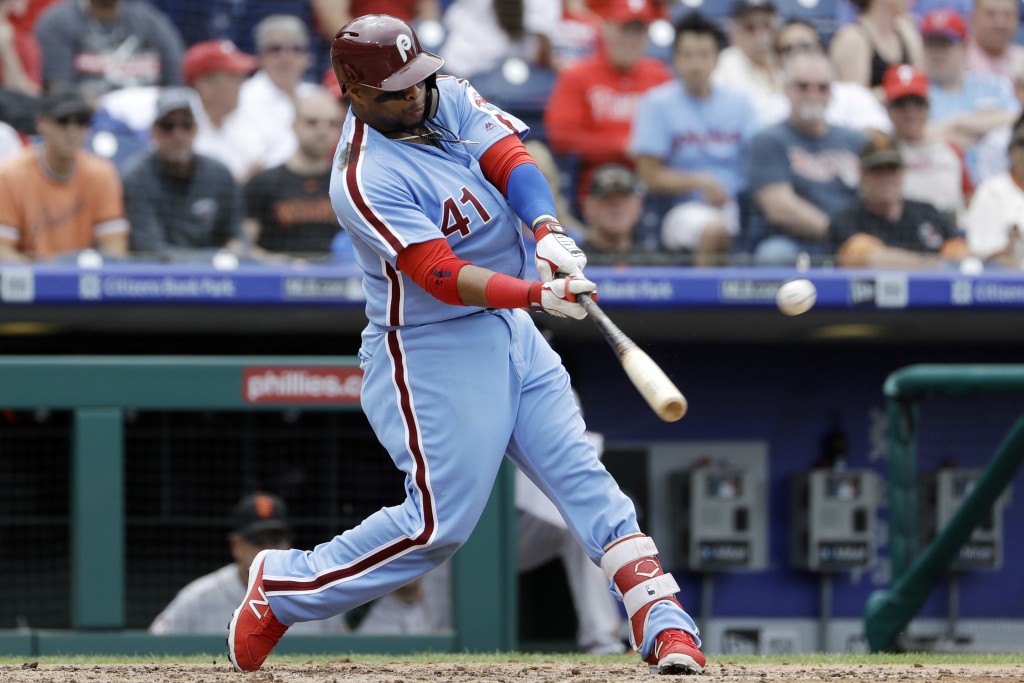 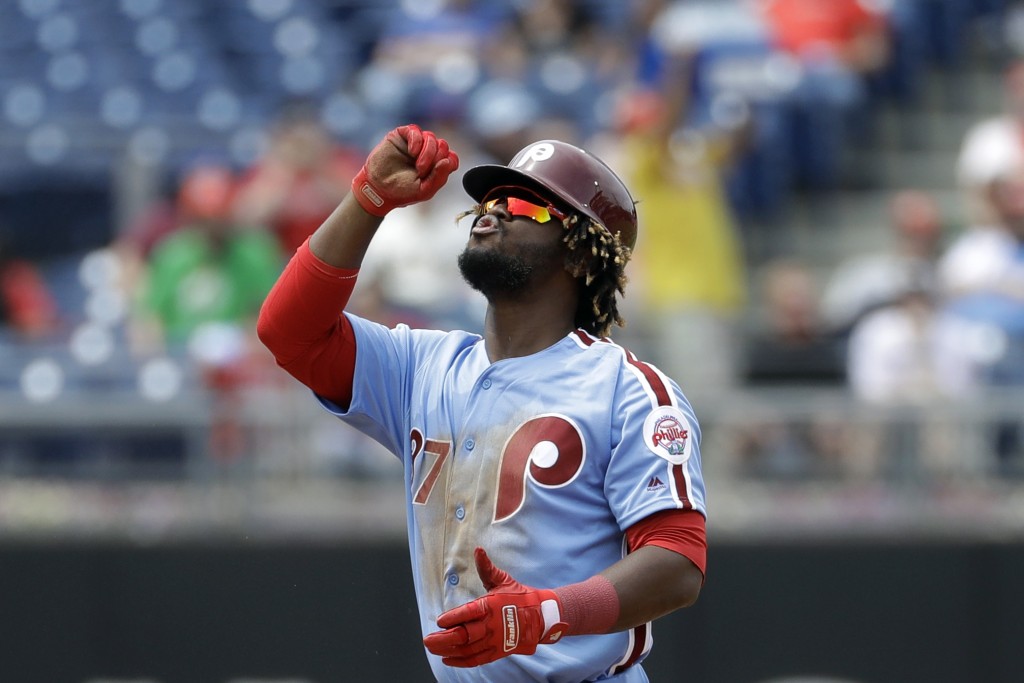 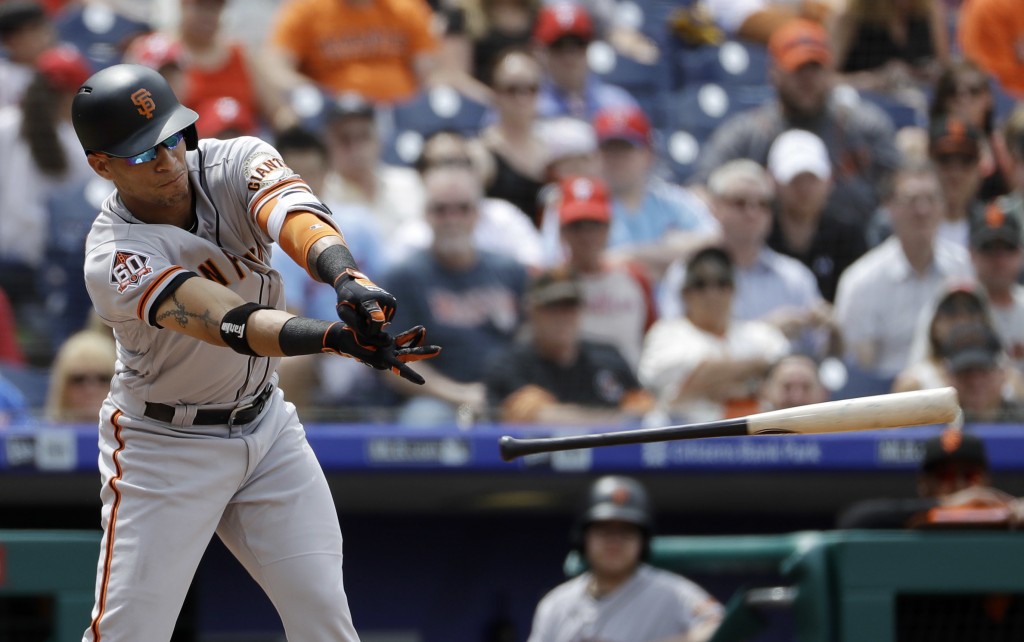 PHILADELPHIA (AP) — Vince Velasquez recovered from a slow start to strike out 12 in six innings, Carlos Santana hit a three-run homer and the Philadelphia Phillies rallied past the San Francisco Giants 6-3 on Thursday for a four-game sweep.

Odubel Herrera added three hits and drove in two runs, extending his on-base streak to 39 games for the Phillies, who improved to 15-5 at home.

Gregor Blanco and Alen Hanson homered to give the Giants a 3-0 lead in the second inning before Velasquez (3-4) began a string of five straight strikeouts. The right-hander allowed five hits and helped the Giants set a dubious mark.

The Giants struck out 53 times in Philadelphia, obliterating the previous team record of 44 in a four-game series set in 2003, according to Stats LLC.

Santana, batting .153 entering May, continued his recent tear when he connected off Ty Blach (3-4) in a four-run fourth. Santana, signed away from Cleveland in the offseason, has driven in 15 runs in the past six games.

Herrera doubled earlier in the fourth to give him the Phillies' longest on-base streak since Bobby Abreu (48) in 2000-01. Herrera added RBI singles off Will Smith in the fifth and Sam Dyson in the seventh, lifting his average to an MLB-best .353.

Rhys Hoskins had an RBI single off Blach, who gave up five runs and seven hits in 4 1/3 innings. The Giants, who were coming off a three-game sweep at Atlanta, were outscored 32-8 in Philadelphia.

With Andrew McCutchen and Buster Posey getting scheduled days off, the Giants took their first lead of the series when Blanco hit the game's second pitch over the right-field wall.

Hanson's two-run shot in the second made it 3-0 and was the seventh homer allowed by Velasquez in his past four starts. Velasquez immediately settled down, striking out 10 of 12 hitters at one point and and adding two singles at the plate.

Seranthony Dominguez, Luis Garcia and Hector Neris each threw a hitless inning, with Neris earning his eighth save.

Giants: RHP Johnny Cueto (elbow) was transferred to the 60-day disabled list, meaning it will be late June at the earliest before he can return. . LHP Madison Bumgarner (finger) could throw a bullpen next week. . OF Hunter Pence (hamstring) is close to resuming a rehab assignment.

Phillies: RHP Pat Neshek said an MRI showed a strained muscle in his right forearm after feeling discomfort in a bullpen session. He could be out another month.

Giants: McCutchen, a five-time All-Star with the Pirates, returns to Pittsburgh for the first time since he was traded in the offseason. LHP Andrew Suarez (1-1, 3.06 ERA) faces Pirates RHP Jameson Taillon (2-3, 4.42) in the opener of the three-game series Friday night.