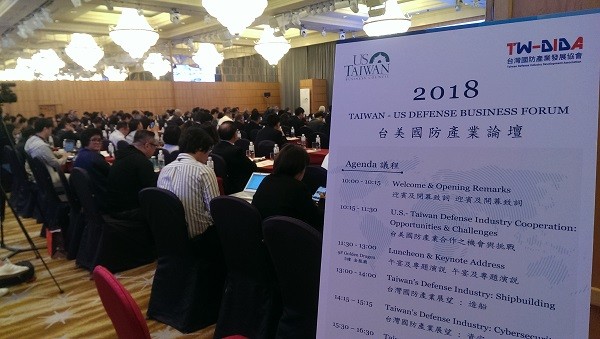 TAIPEI (Taiwan News) – The first Taiwan - U.S. Defense Business Forum to ever be held in Taiwan brought together defense industry representatives from both countries in Kaohsiung, Taiwan on May 10.

The Defense Business Forum was organized by the U.S. Taiwan Business Council and the Taiwan Defense Industry Development Association (TW-DIDA). It was emphasized, that the meeting represents a new chapter and a first step in building a stronger bilateral defense community between the U.S. and Taiwan.

Minister Shen expressed his optimism that the Business Defense Forum would build upon the long history of cooperation between the U.S. and Taiwan, and help to further enhance bilateral ties moving forward.

The President of the U.S.-Taiwan Business Council, Rupert Hammond-Chambers noted that integrating Taiwanese businesses into the U.S.-led global defense industry supply chain will be a long and gradual process, but that the bilateral relationship "is one worth investing in."

The conference held a morning session on “Challenges and Opportunities,” and three afternoon sessions, each of which addressed a key strategic industry targeted for cooperation between Taiwan and the U.S.: Shipbuilding, Cyber security, and Aerospace.

As for challenges facing improved cooperation in the defense industry, speakers seemed to agree that the primary hurdle to establishing closer ties between Taiwan and the U.S. is the risk of Intellectual Property (IP) and trade secret theft, since many Taiwanese companies may be closely integrated with Chinese partners, suppliers, or manufacturers that have close ties to Beijing.

Without a high degree of confidence in a company's ability to protect intellectual property and trade secrets of the U.S. defense industry, U.S. Department of Defense will be very reluctant to grant security clearance, noted Phil Georgariou, the Vice President of BAE Systems. The forum in Kaohsiung will hopefully be a first step towards increasing confidence between potential business partners in both countries, and between the Taiwanese Ministry of National Defense and the United States government.

A second challenge discussed by the speakers, and one affecting Taiwan more generally, is the need to cultivate talent across a range of industries, not only in a technological sense, but also in terms of legal knowledge, networking, and negotiating. Taiwan should also work towards developing a better ecosystem for talent cultivation.

Hammond-Chambers suggested that an inter-agency council or office be created to better coordinate investment into private industries that could work towards helping to develop Taiwan's national security apparatus.

During the closing Q&A session, Hammond-Chambers also said that “Taiwan is not spending enough on its own defense” in light of the significant threats that the country is facing. The speakers in the morning session sought to emphasize, the new chapter in U.S. and Taiwan defense industry would be a slow process of building new industry supply chains one link at a time, that will require significant cooperation and integration between domestic industries in Taiwan.

China announces sanctions on US individuals, entities involved in arms deal to Taiwan
2020/10/26 17:50