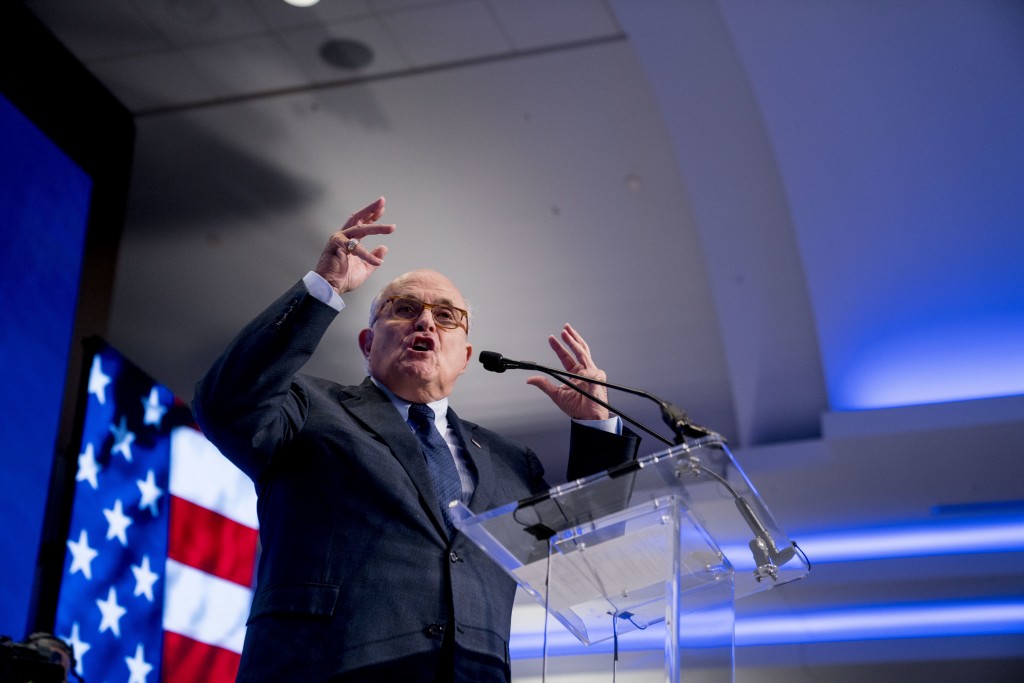 WASHINGTON (AP) — The Trump administration sought to distance itself from Rudy Giuliani's dramatic public statements about Iran and North Korea, saying that President Donald Trump's new lawyer does not speak for the president on matters of foreign policy.

Since joining Trump's legal team last month and becoming its public face, Giuliani has raised eyebrows for a series of startling assertions not only about his legal strategy and the special counsel investigation, but also about global affairs and Trump's policies. That spurred widespread confusion over whether the former New York mayor, now on Trump's payroll, was disclosing information he'd been told by the president, stating U.S. government policy or merely describing his own impression of events.

"He speaks for himself and not on behalf of the administration on foreign policy," State Department spokeswoman Heather Nauert said Monday.

It was the clearest sign to date that Trump's administration is seeking to draw a line between itself and Giuliani on matters of government policy, even as he continues to act as his spokesman on matters related to special counsel Robert Mueller's Russia probe. It comes as Trump prepares for a series of high-stakes moments in the coming weeks on Iran, North Korea and the Mideast conflict — the type of delicate and potentially explosive regions where events can easily be upended by an errant remark by an emissary of the U.S. president.

Giuliani's perplexing and sometimes conflicting remarks have increasingly become a cause of consternation for Trump's aides. Asked last week whether Giuliani's portfolio included foreign policy, White House spokeswoman Sarah Huckabee Sanders said simply, "Not that I'm aware of." And on Friday, even Trump seemed peeved by the attention Giuliani's off-message comments were attracting, telling reporters that the former prosecutor had just come on board and was still working to "get his facts straight."

Although Trump has hinted that such a move could be coming, there has been no formal announcement by the U.S. government, which is in detailed talks with North Korea at the moment to plan a historic summit between Kim and Trump. The detainees have not yet been released as predicted by Giuliani.

Then on Saturday, Giuliani caused another stir when he spoke to a group that supports the overthrow of Iran's government and said that the president was "committed" to regime change in Iran. Although Trump is sharply critical of Iran and preparing for a decision by week's end about whether to withdraw from the 2015 nuclear deal, his administration has not called for overthrowing Iran's government. U.S. officials said they were taken aback by Giuliani's comments and did not consider them to be consistent with current Trump administration policy.

The incident and others like it have also raised questions about whose counsel Trump is seeking on matters of national security. Giuliani, while only employed by Trump for legal matters, has been known to advise Trump on policy in the past and was considered for secretary of state. The group that hosted his speech, the Organization of Iranian-American Communities, is associated with the Iranian exile group called the Mujahedeen-e-Khalq, which was considered a terrorist group by the U.S. until 2012.

The OIAN said it didn't pay Giuliani to give Saturday's speech, although Giuliani in the past has acknowledged being paid by the MEK for speeches. His office didn't respond to a request for comment.

In the Trump administration, the lines between official spokesman and Trump confidant have often been blurred, creating frequent questions about who speaks authoritatively for the president.

A long list of allies, friends, lawyers and government officials defend him on television, sometimes conveying information they've obtained from Trump that the public is learning for the first time. And when Trump aides leave his service, whether by choice or by firing, they often don't stray far and continue to advise him informally on key issues, giving them insight into his thinking at any given moment that is later shared on cable news shows or public speeches.

Even among those explicitly authorized to represent U.S. foreign policy, such as Cabinet officials, there has often been confusion about whose version of events most accurately represents Trump's positions at any given moment. In the foreign policy realm, Trump's secretary of state, U.N. ambassador and White House press secretary have occasionally seemed to be reading from different scripts, even on sensitive issues like whether Syrian President Bashar Assad must leave power.

The confusion over Giulani's comments comes amid a broader crisis of credibility for Trump's White House, exacerbated by the rapidly shifting accounts over the $130,000 payment to adult-film actress Stormy Daniels. Sanders, the White House spokeswoman, has faced a barrage of criticism for giving information to the media that turned out to be incorrect.

For the United States, there's a risk if world leaders trying to divine Trump's intentions aren't sure who to believe, said Ned Price, a former spokesman for the White House National Security Council in the Obama administration.

"You have foreign governments reading the tea leaves based on what people like Giuliani are saying," Price said, pointing to the former mayor's declaration about the detainees in North Korea. "Not only does it put their families in this absolutely painful position, but in the worst event it could actually be counterproductive if the North Koreans think we're spiking the football."