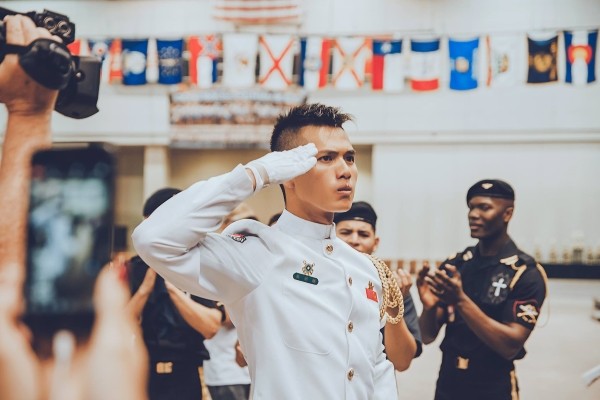 TAIPEI (Taiwan News) -- A Taiwanese naval honor guard took fourth place and a special award at the World Drill Championships held at Ocean Center in Daytona Beach, Florida on May 5, the first member of a Taiwan honor guard to compete in the event, reported Liberty Times.

28-year-old Taiwan Navy Honor Guard Su Chi-lin (蘇祈麟) competed against a field of 36 competitors from around the world in the solo category of the World Drill Championships on Saturday. Though he nervously dropped his gun twice in the preliminary round, Su persevered on to the finals.

During the finals, Su executed a difficult 1080 rotation of his rifle and then he put on a blindfold, spun his weapon behind is back and caught it cleanly with the other hand, gaining enthusiastic cheers from the crowd. At the end of his routine, Su shouts: "Thank you WDC! Thank you America! I love you Taiwan!"

Su finished with a final score of 2,070 points out of a maximum score of 3,000, good enough to earn fourth place and a special founders award. Su putting on a blindfold. (Photo by @TriangleStudio03)

After nearly 10 years of service in the Air Force, at the age of 28 Su decided to join the Taiwan Navy Honor Guard. In 2015 and 2016, Su took first place in Taiwan's national honor guard competition in the solo category.

Su first started following the World Drill Championships 10 years ago, but he had not previously been able to gain permission and sufficient funds to compete before. Early this year, former Minister of National Defense Feng Shih-kuan (馮世寬) was supportive of his desire to compete and the Ministry of National Defense agreed to fund his airfare and lodging to take part in this year's competition. Su cheering after completing his routine. (Photo by @TriangleStudio03)

Video streamed live of Su preparing and performing his routine has received over 500,000 views and has gained 18,000 likes: Su standing at attention next to Taiwan flag. (CNA image)