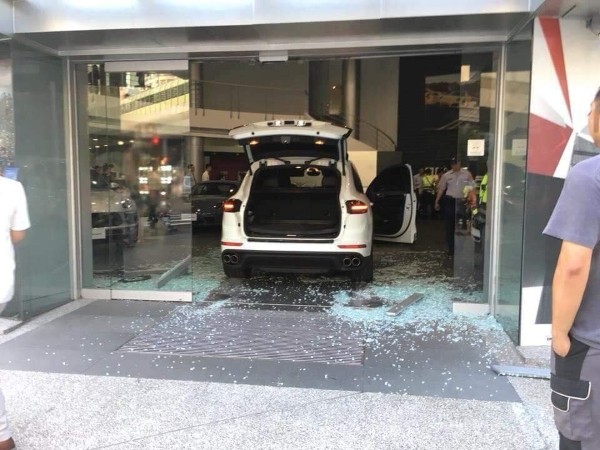 TAIPEI (Taiwan News) -- Video has surfaced of an irate customer crashing his brand new Porsche through the display window at a dealership in western Taiwan's Taichung City on Wednesday (May 2) around 5 p.m. after his car was delivered without the optional extras he had requested.

In the video posted on the Facebook group Breaking News Commune, the 42-year-old man surnamed Chu (朱) can be seen smashing his white Porsche through the plate glass window of the Porsche flagship dealership on Wenxin Road in Taichung City. After smashing through the front showroom window, the costly car stops just short of the front desk as the two receptionists slide back in their wheeled chairs in horror.

Oddly, rather than running for their lives, the two secretaries causally saunter away from the desk before Chu guns the motor and plows right into the front desk. Just to make sure the desk is completely finished off, Chu hits the gas one more time to crush what was left of the front counter.

After being questioned by police, Chu claimed in January of 2017 he had originally negotiated to buy a Panamera Sport Turismo for the base price of NT$5.98 million, plus an additional NT$1.48 million for the optional 4D Chassis Control and other accessories, for a total of NT$7.46 million. He said he paid an initial deposit of NT$2.23 million, however in November of last year, the vehicle was delivered without the 4D Chassis Control, so he refused to pay the balance and wanted to cancel the order.

Five days ago, he received a letter from the dealer asking him to fulfill the contract or forfeit the NT$2.23 million deposit he had left with them. Livid, Chu drove another Porsche, an NT$4 million Cayenne, into dealership's showroom out of protest. After crashing into the showroom, Chu can be seen berating dealership staff and answering questions from reporters, before finally being taken away by police. The next day he was charged with public endangerment, intimidation, and property damage.

The Taichung Prosecutor's Office then released Chu, but he immediately headed back to the dealership. Sales staff were horrified to see Chu yet again and immediately called the police.

However, when police arrived, they found that Chu had come to negotiate with the dealer. During a two-hour negotiation, the dealer offered to return the NT$2.3 million deposit, or to allow him to purchase the car and include the optional 4D Chassis Control for a total of NT$7.46 million, however the two sides could not reach a consensus and negotiations broke down. Chu being taken away by police officer. (Breaking News Commune)

Aftermath of the crash. 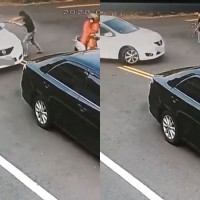 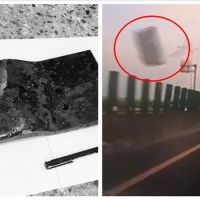