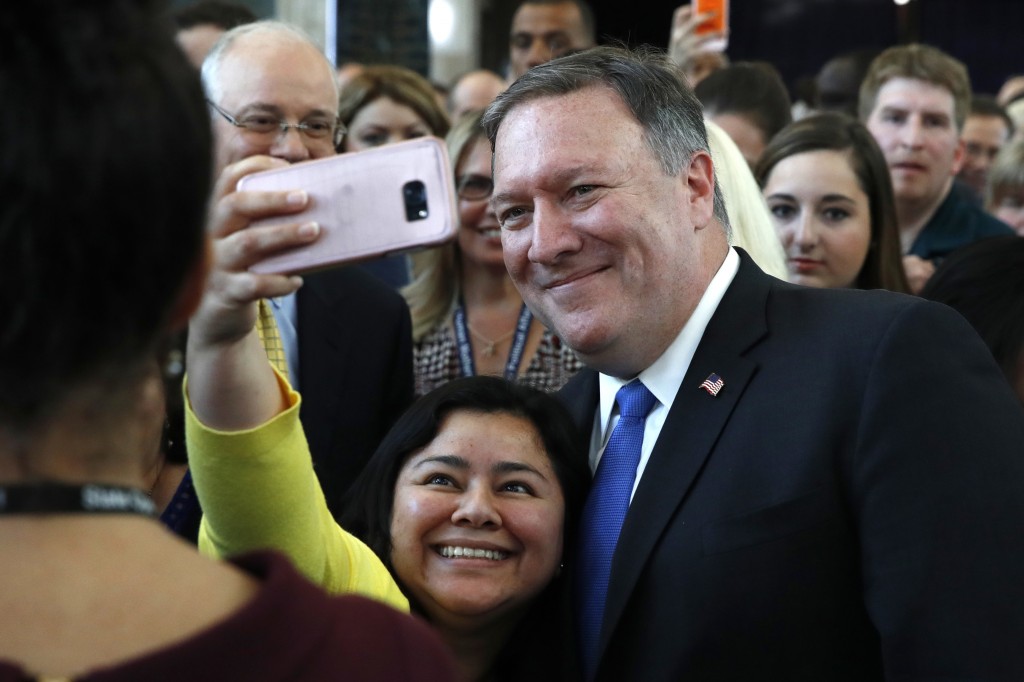 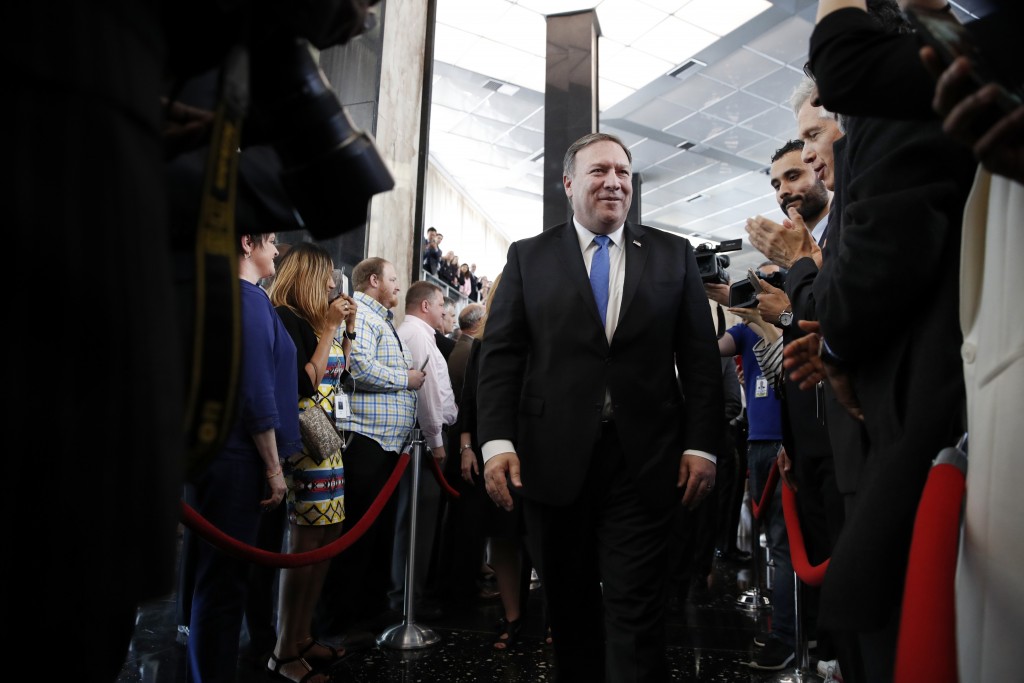 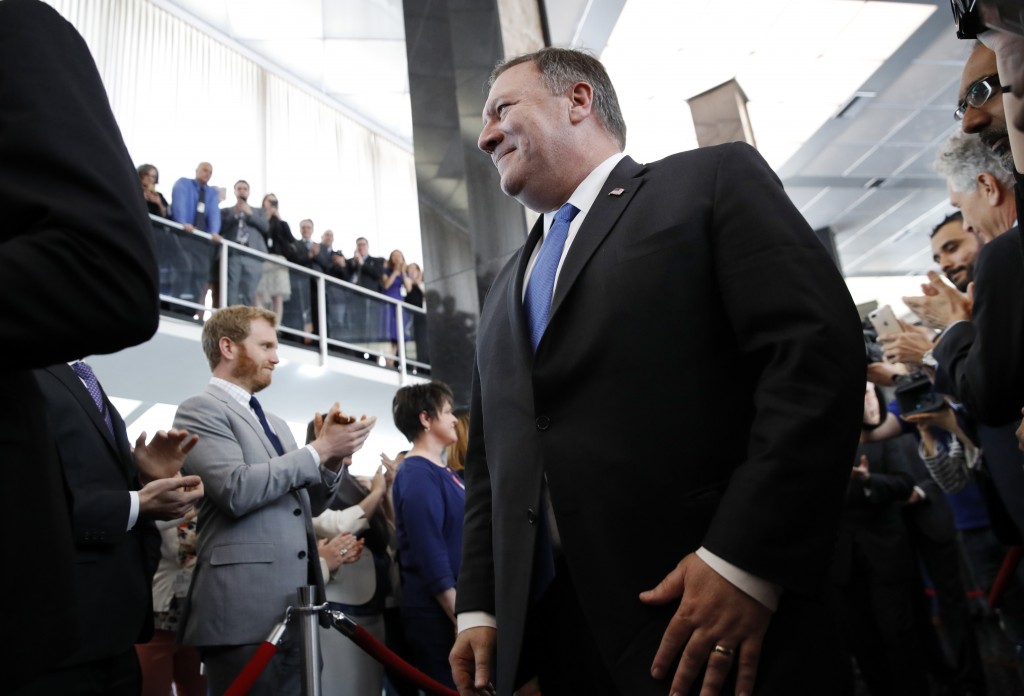 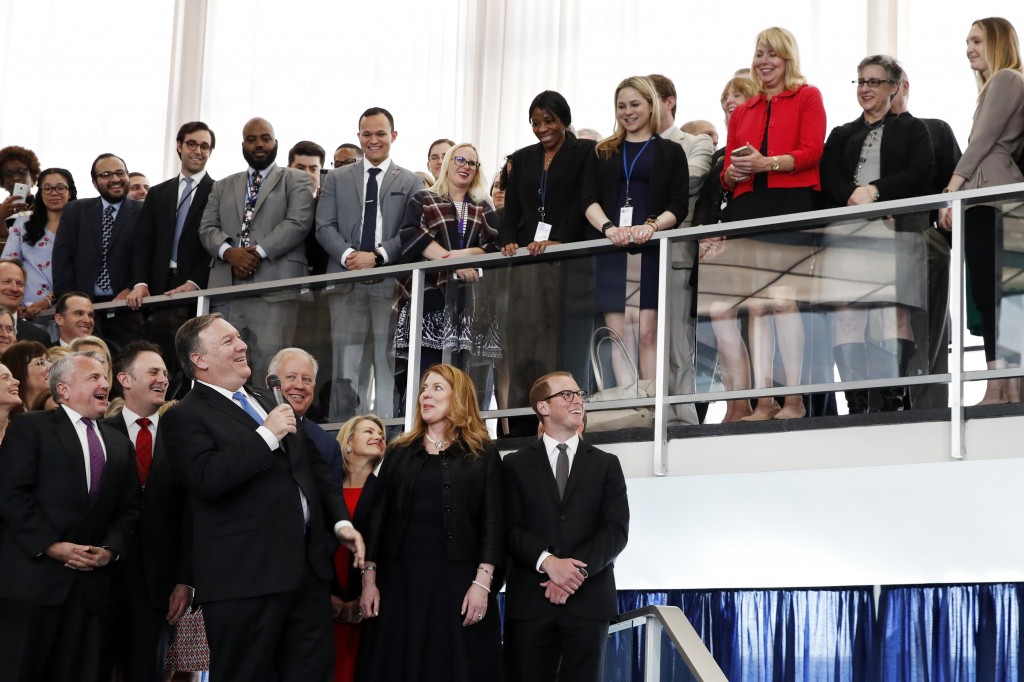 WASHINGTON (AP) — He didn't mention Rex Tillerson by name. But the contrast was clear as new Secretary of State Mike Pompeo arrived at the State Department vowing to reinvigorate American diplomacy and help the United States get "back our swagger."

Cheers and applause greeted Pompeo on Tuesday as he entered the marbled lobby of the Harry S. Truman Building for the first time as America's top diplomat and addressed a diplomatic corps left deeply dispirited by a tumultuous year under Tillerson, President Donald Trump's first secretary of state. Pompeo described his mission as leading diplomats to execute Trump's foreign policy "with incredible vigor and incredible energy."

"The United States diplomatic corps needs to be in every corner, every stretch of the world, executing missions on behalf of this country," Pompeo said. "It is my humble, noble undertaking to help you achieve that."

He said he would spend "as little time" as possible cloistered in the secretary's seventh-floor suite of offices, preferring to "get out" and interact directly with diplomats around the world, including humanitarian workers at the U.S. Agency for International Development.

It was a subtle attempt to differentiate himself from Tillerson, who was infamous for surrounding himself with just a few close aides and eschewing the input of career diplomats, rank-and-file staffers and even U.S. lawmakers.

And in another sign that Pompeo was pursuing a different approach than his predecessor, on his first day in the office he joined Twitter, a medium that Tillerson did not use. From the handle @SecPompeo, he tweeted his gratitude to Trump for naming him to the job.

"So many matters of global importance demand our focus," Pompeo wrote in his inaugural tweet from the account. "I'm committed to putting the interests of the American people first and look forward to serving with the world's finest diplomatic corps."

A top Pompeo priority is to work quickly to stem the morale crisis at the State Department, which has lost relevance under Trump. Tillerson, the former Exxon Mobil CEO, spent much of his 14 months in office pushing budget and staff cuts and avoiding public appearances while leaving key diplomatic positions unfilled.

Pompeo was confirmed by the Senate last week and left immediately on his first foreign trip, visiting Belgium, Saudi Arabia, Israel and Jordan. He returned late Monday. By Tuesday morning, he was at the White House for a ceremony honoring the Army football team in the Rose Garden, where Trump pointed out that his new diplomat has "gotten more publicity than me lately."

Trump planned to come to the State Department on Wednesday for a formal swearing-in ceremony for Pompeo, a former Republican congressman from Kansas who ran the CIA under Trump until being named as Tillerson's replacement.

Pompeo did not offer any details about what foreign policy issues would consume his focus in his first months, but a long list of pressing matters awaits him, including the president's upcoming decision on whether to withdraw from the Iran nuclear deal. Pompeo is also playing a leading role in Trump's diplomacy with North Korea, and he secretly traveled to Pyongyang last month and met with Kim Jong Un ahead of Trump's planned summit with the North Korean leader.

In his brief speech to the State Department's workforce, Pompeo emphasized the need for an active U.S. presence beyond its borders — striking a somewhat different tone than the president, who has advocated putting "America first." Pompeo noted that he described in his Senate confirmation hearing how the United States "is so exceptional and so incredibly blessed."

"The facts that derive from that is it also creates a responsibility, a duty for America all across the world," Pompeo said. "I know for certain that America can't execute that duty, can't achieve its objectives absent you all."