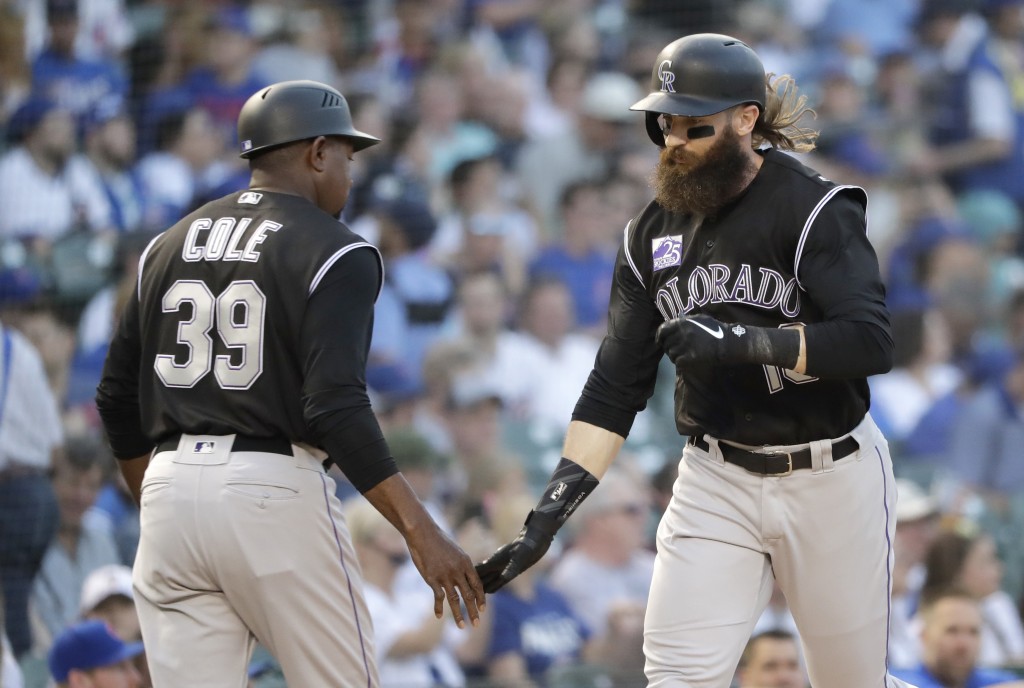 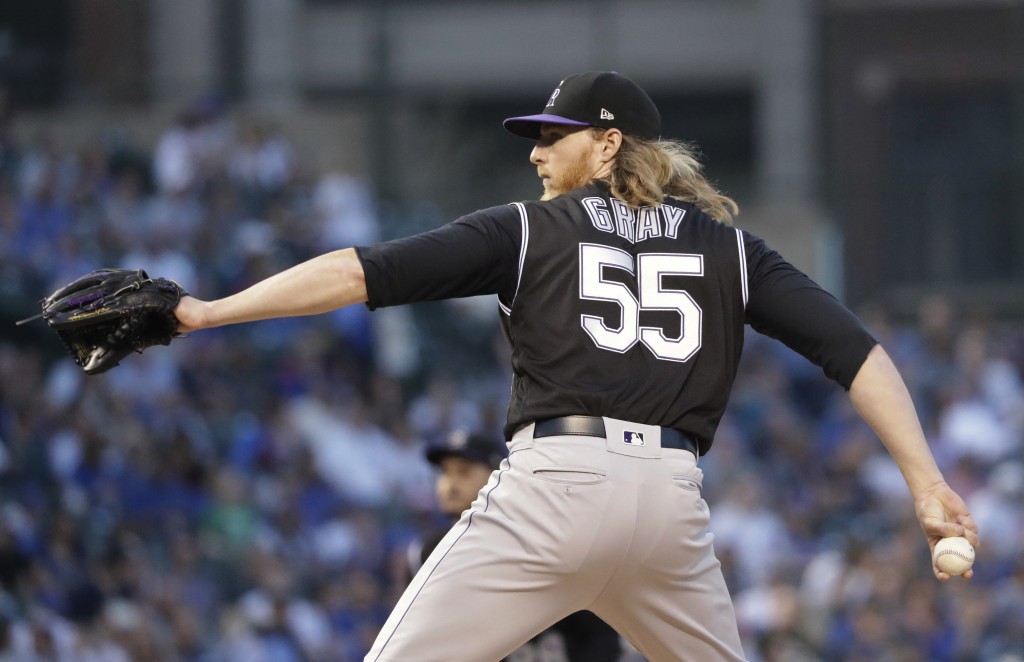 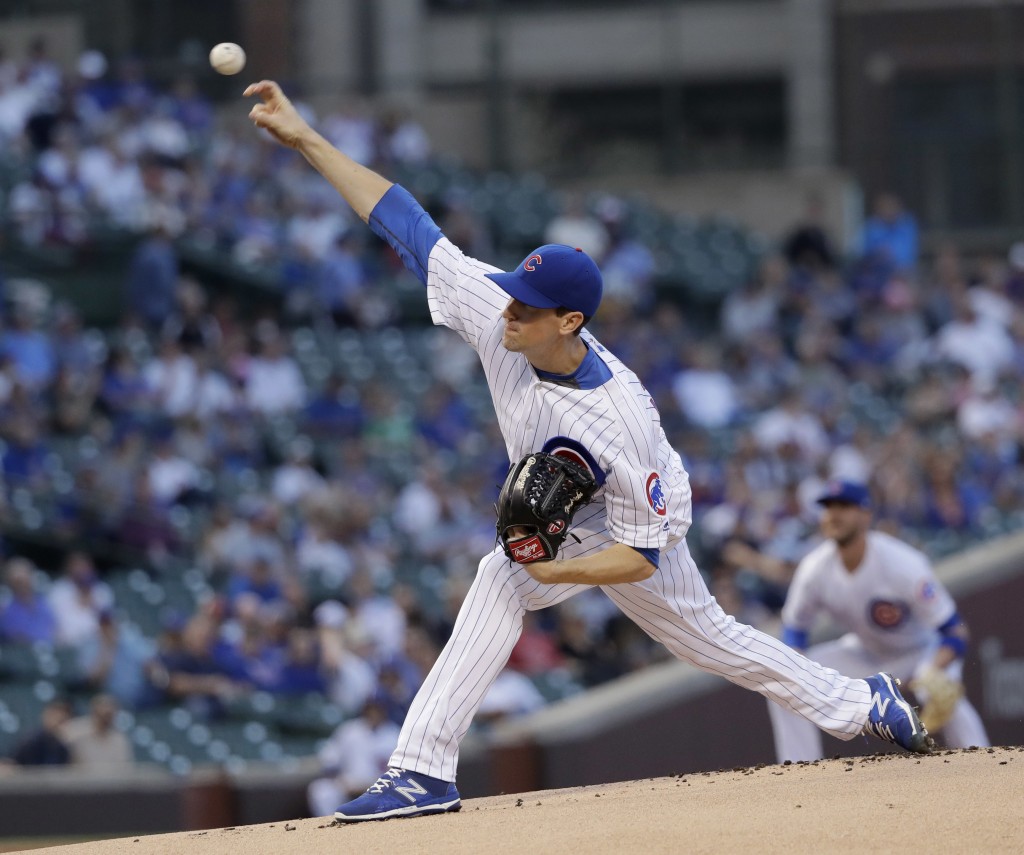 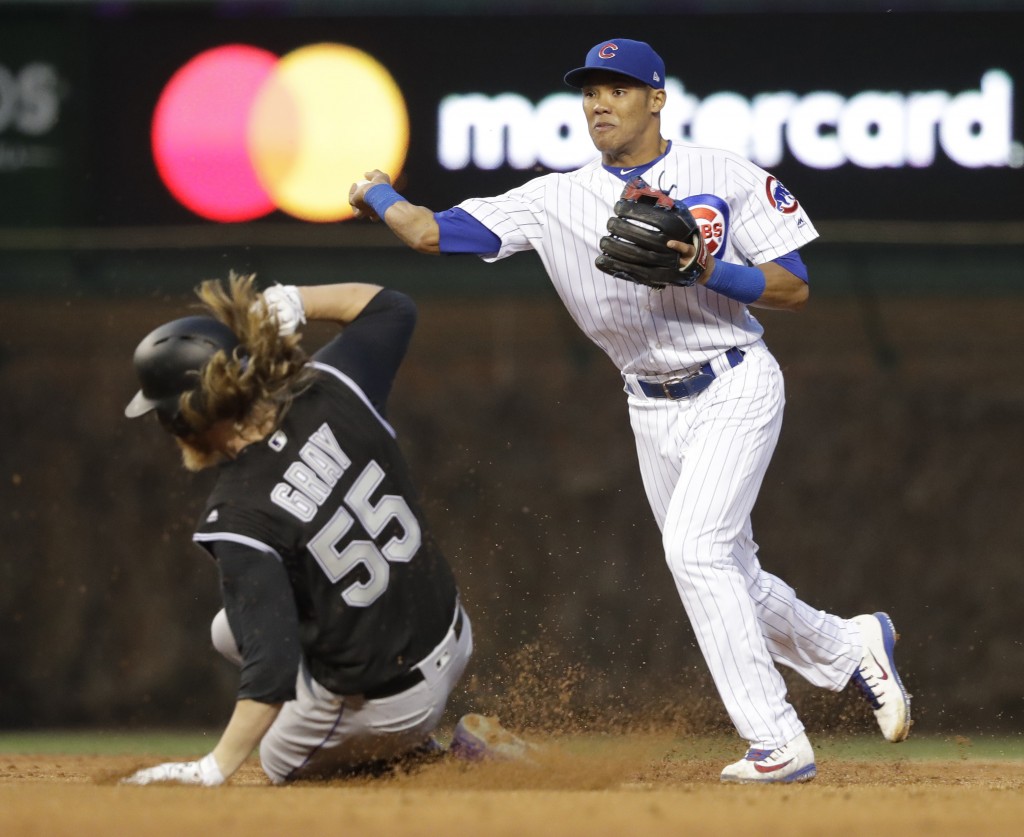 CHICAGO (AP) — Charlie Blackmon and David Dahl opened the game with consecutive homers off Kyle Hendricks, and the Colorado Rockies cooled off the Chicago Cubs with a 3-1 victory on Tuesday.

With the wind blowing out on a warm night at Wrigley Field, Nolan Arenado also homered as Colorado stopped a three-game slide. Jon Gray (3-4) pitched seven crisp innings for his second straight win after dropping three in a row.

The Cubs had won a season-high five straight games, scoring three runs or fewer in each one. They got another solid start from Hendricks (2-2), but their recent trouble at the plate finally caught up to them.

The crowd of 40,077 was still finding its seats when Blackmon drove a 3-2 pitch over the wall in center for his 10th of the season. It was his 29th career leadoff homer.

Blackmon's shot snapped a string of 33 2/3 innings for Chicago's rotation without allowing an earned run. It was the first earned run allowed by any pitcher on the Cubs since the seventh inning of Friday's 3-2 victory over Milwaukee.

Dahl then connected a 1-1 pitch, belting a shot to left-center for his first major league homer since Sept. 25, 2016, against the Dodgers.

Arenado got in on the action with a leadoff drive in the fourth, giving Colorado a 3-1 lead. It was his first homer since he went deep three times in four games from April 20-23.

That was it for the Rockies against Hendricks, who allowed four hits and walked two in 7 2/3 innings, the longest outing for a Chicago pitcher this season. But the Cubs couldn't get anything going against Gray.

Manager Joe Maddon put Anthony Rizzo in the leadoff spot to try to help the big first baseman out of his slump, and he opened with his fourth career leadoff homer on a drive to left that drifted over the wall for his second of the season.

Gray then retired nine in a row. Kyle Schwarber tripled with one out in the seventh, but Gray struck out Victor Caratini and Jason Heyward fouled out to end the inning.

Adam Ottavino worked the eighth and Wade Davis finished the three-hitter for his 11th save in 12 chances. It was Davis' first appearance at Wrigley since he saved 32 games for the NL Central champion Cubs last year.

Colorado promoted infielder Daniel Castro from Triple-A Albuquerque and sent down prospect Ryan McMahon, adding another option at second base with DJ LeMahieu sidelined by a hamstring injury.

Castro started at second against the Cubs and went 0 for 3 in his first major league game since Sept. 30, 2016, for Atlanta against Detroit.

"The decision was more about what position he plays," manager Bud Black said. "We felt we needed more coverage with DJ being out for the next five games."

Cubs: RHP Eddie Butler (right groin strain) was eligible to return on Monday, but remains on the disabled list. "He's doing better, but I don't have a specific date for you yet," Maddon said.

Rockies left-hander Tyler Anderson and Cubs right-hander Yu Darvish pitch in the series finale Wednesday afternoon. It's the first start for Anderson (1-0, 4.10 ERA) since he left Friday's 1-0 victory at Miami after just 1 1/3 innings due to a heartbeat issue. Darvish (0-2, 5.26 ERA) remains in search of his first win with Chicago after he tossed six sparkling innings in a no-decision against Milwaukee in his previous outing.