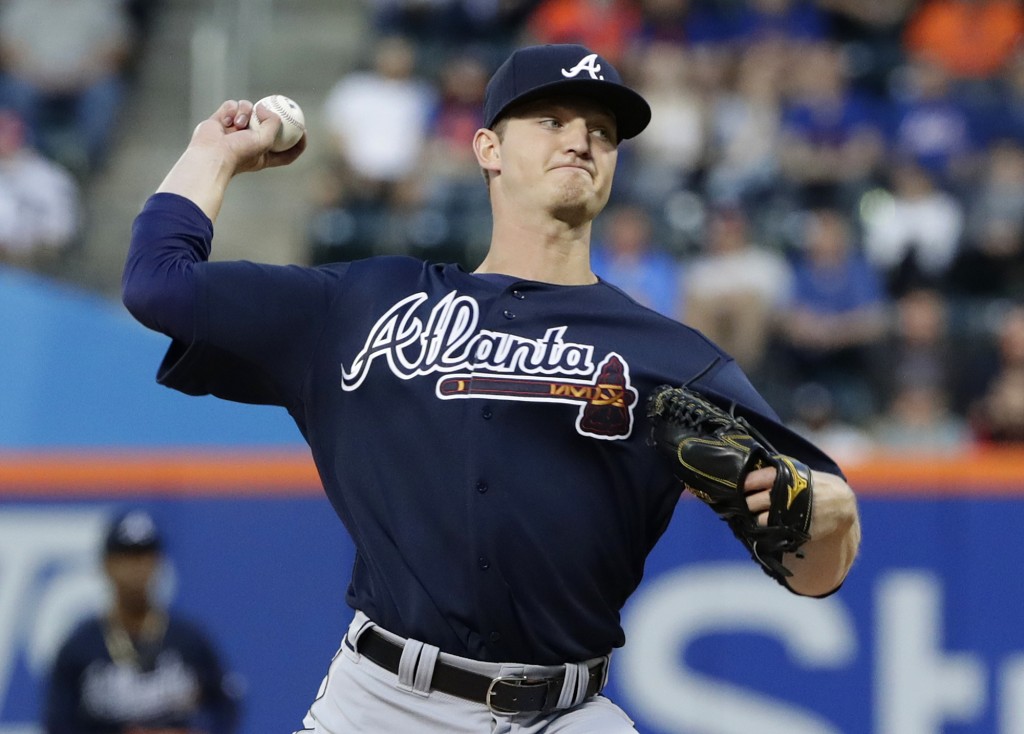 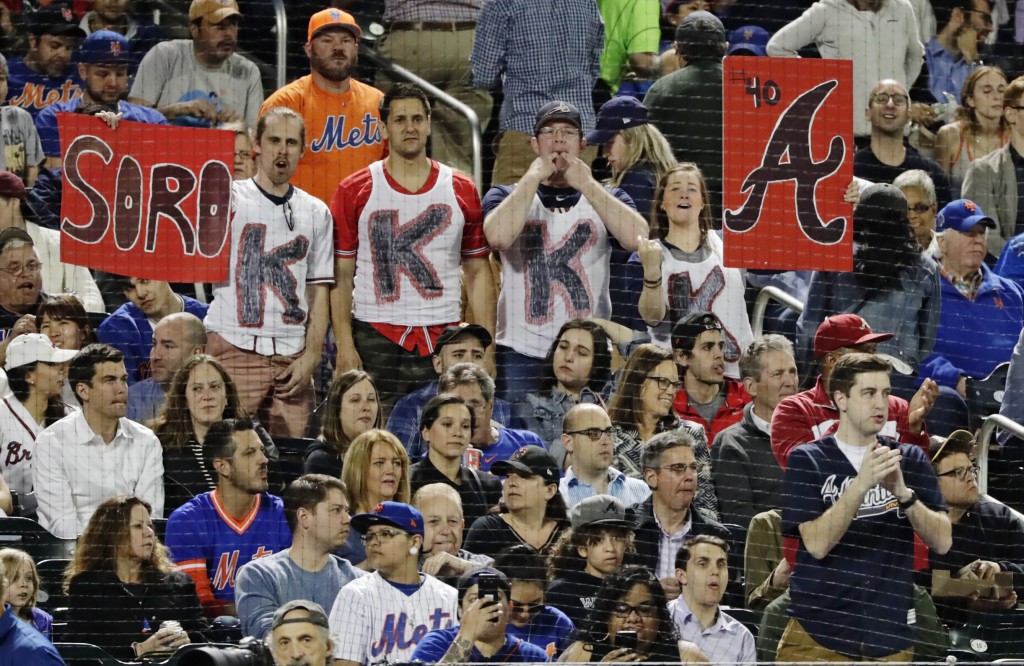 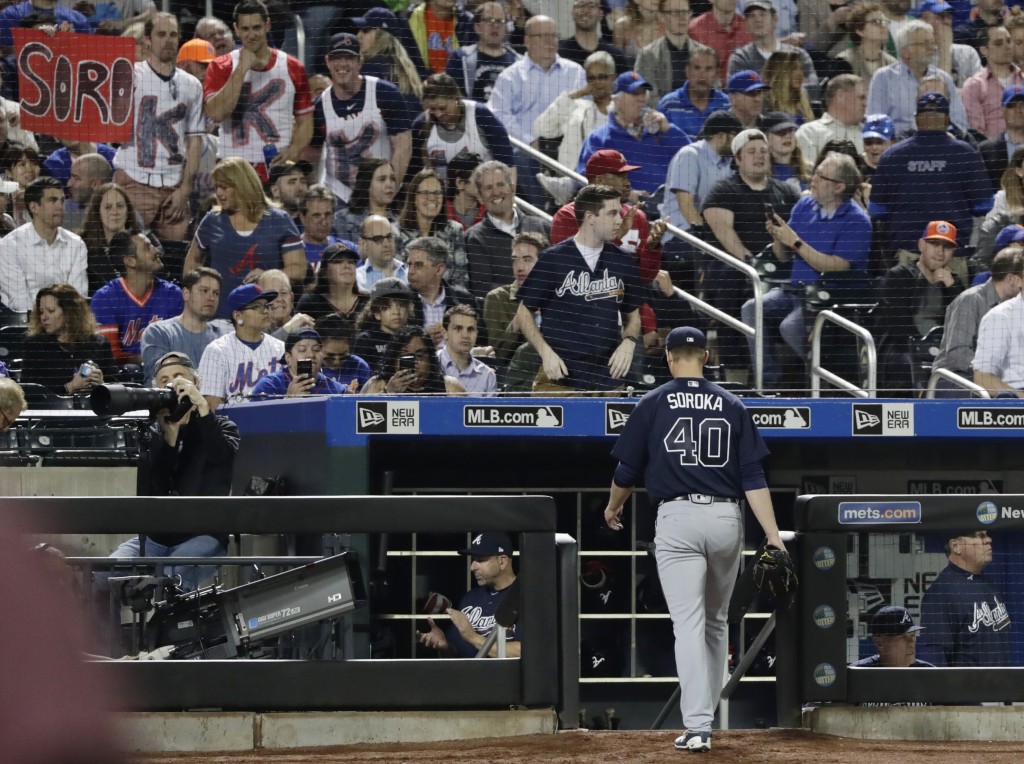 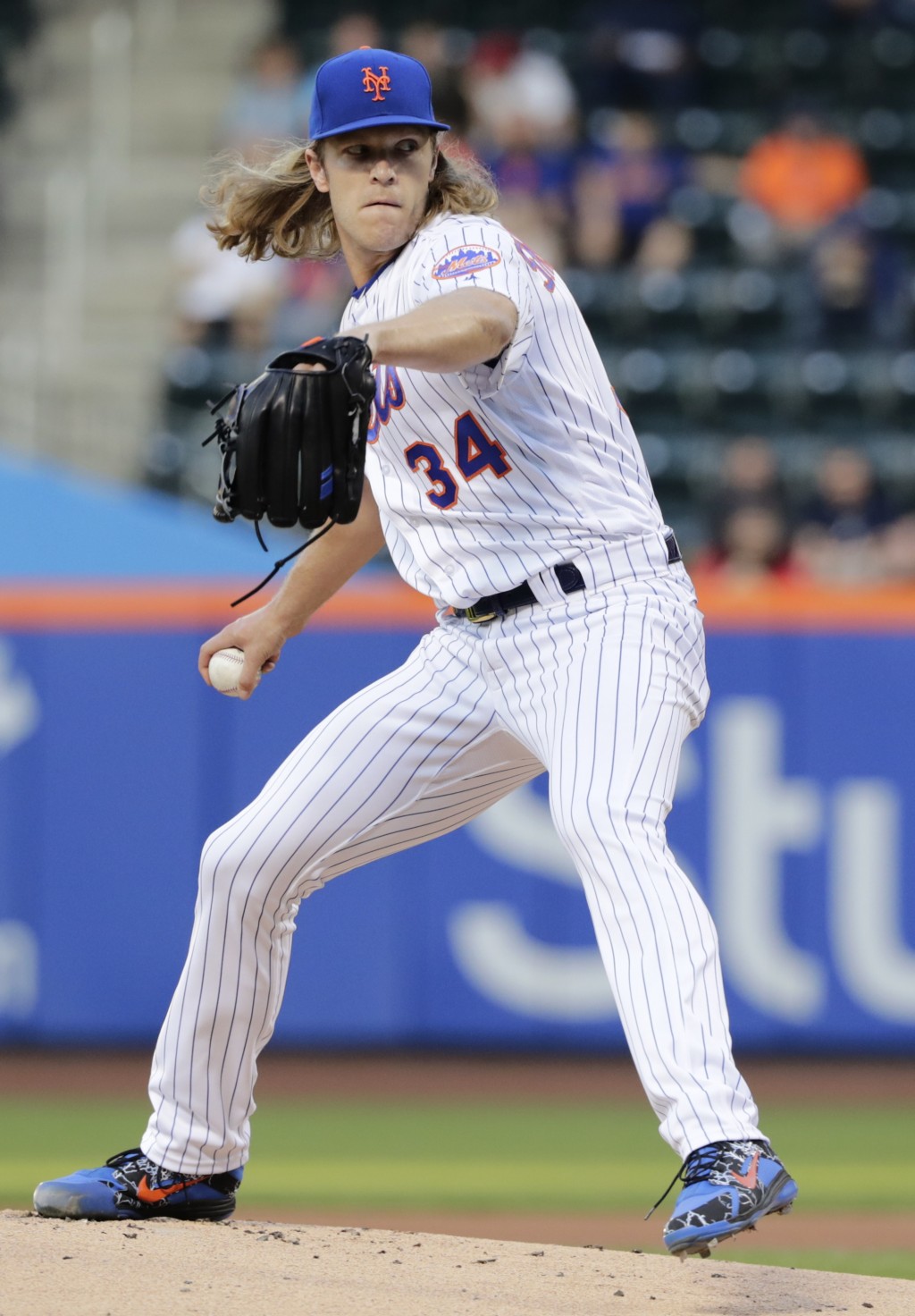 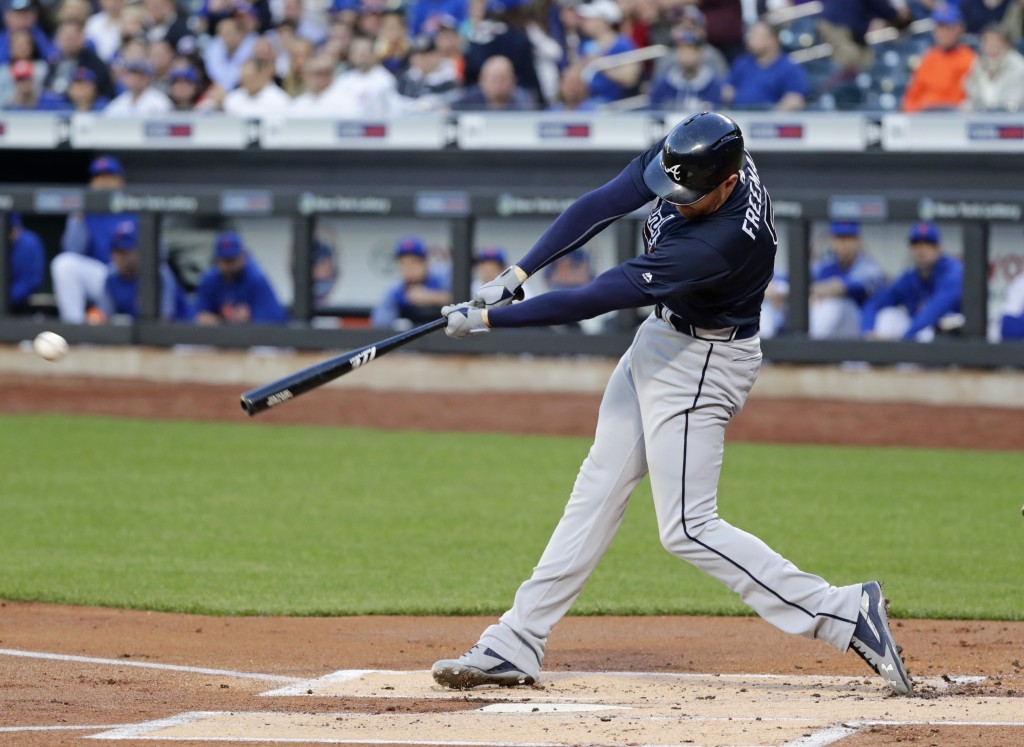 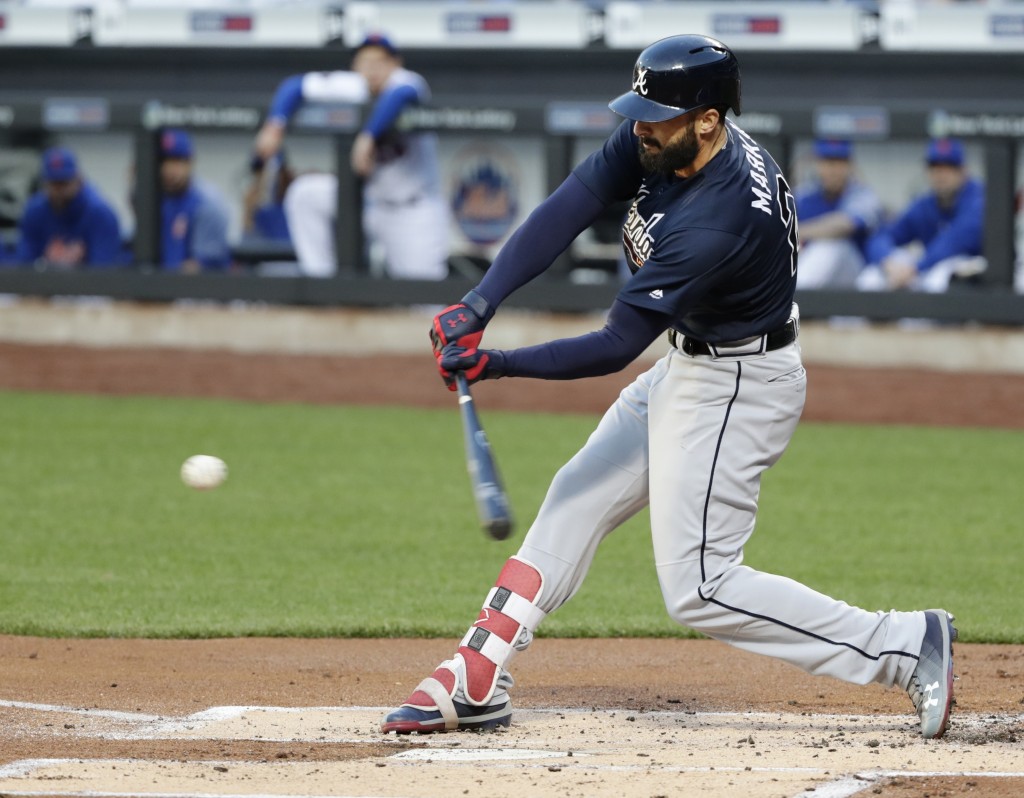 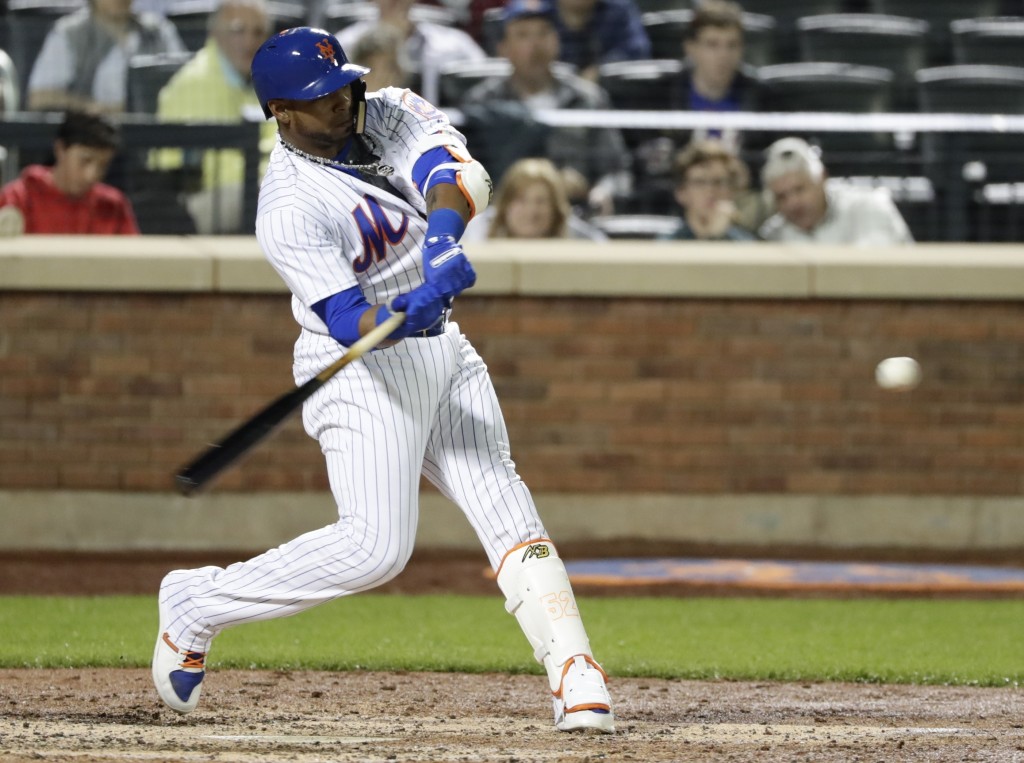 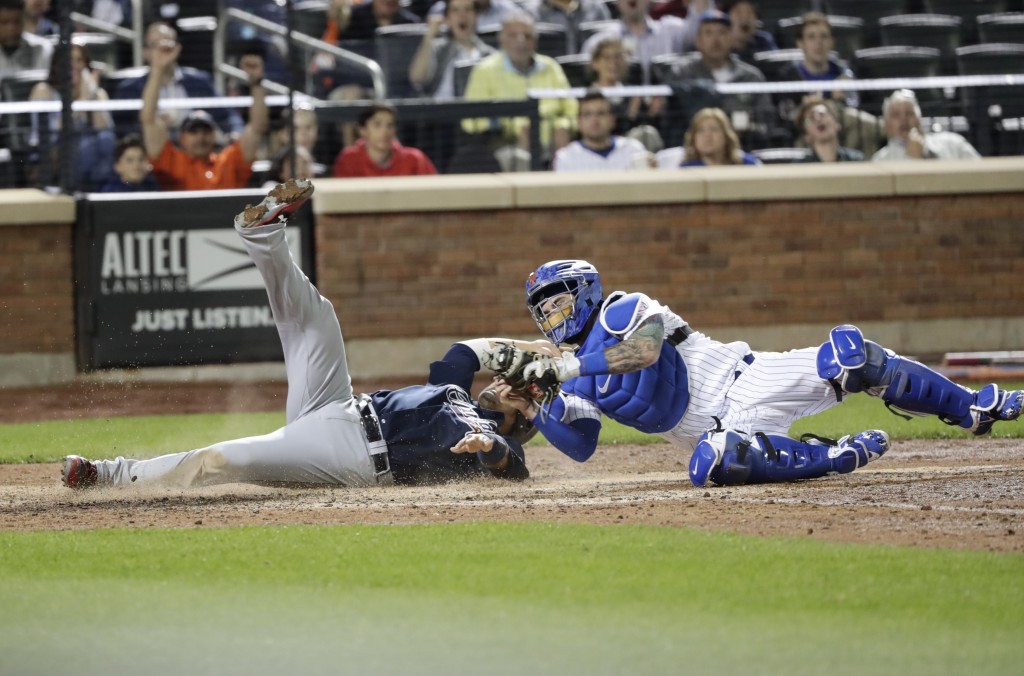 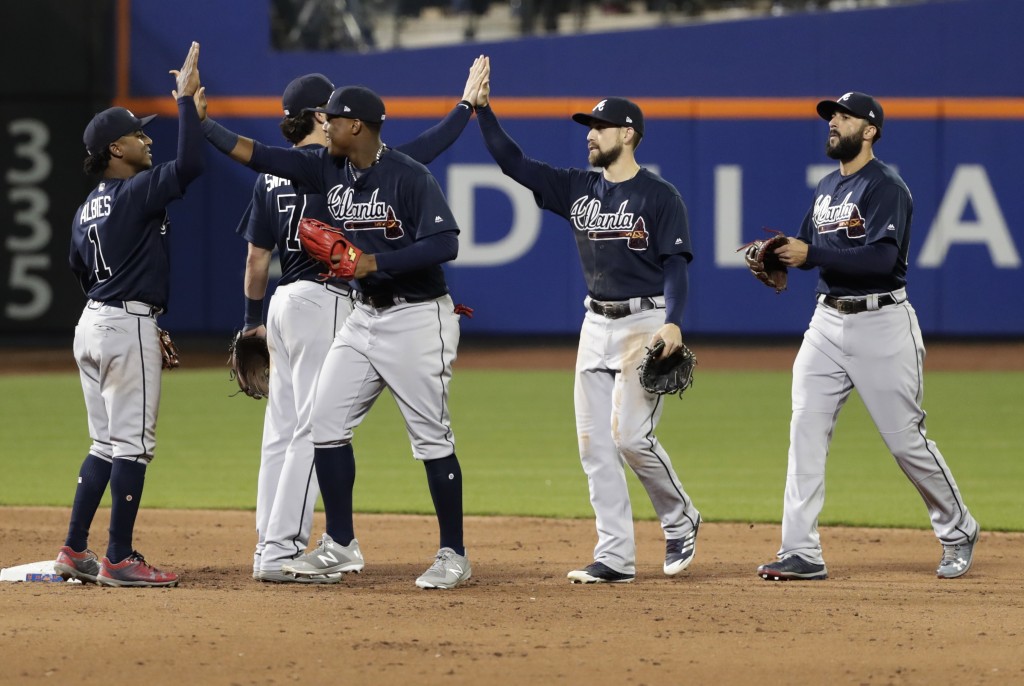 NEW YORK (AP) — Mike Soroka pitched six impressive innings to win his major league debut for Atlanta, and the baby Braves hammered Noah Syndergaard at the outset of a 3-2 victory over the New York Mets on Tuesday night.

With the three youngest players in the majors all in their starting lineup, including the 20-year-old Soroka, the surprising Braves (17-11) began the game with four consecutive hits off Syndergaard to build a three-run cushion. Freddie Freeman laced a two-run double to drive in newbies Ozzie Albies and Ronald Acuna Jr. before Nick Markakis added an RBI single.

New York scored once in the ninth off Arodys Vizcaino and had a runner on second when pinch-hitter Jose Reyes lofted a fly to left field. Acuna, a premier prospect called up last week who is off to a sizzling start in the big leagues, got twisted around as he retreated but made a shaky-looking catch near the edge of the warning track for the final out.

Acuna smacked the wall with one hand, and Vizcaino had his fourth save as the Braves won their third straight and fifth in six games.

Back quickly from a sore thumb, Yoenis Cespedes homered and got three hits for the NL East-leading Mets (17-10). He also threw out a runner at home plate from left field.

Pinch-hitter Wilmer Flores had an RBI groundout in the ninth.

Soroka (1-0) became the latest top prospect called up by the Braves and the right-hander from Canada fit right in with an excellent performance on the mound. With his father among family and friends in the stands who brought a Canadian flag, Soroka gave up one run and six hits. He struck out five and walked none to outpitch an imposing ace in Syndergaard on his home mound at Citi Field.

Soroka joined Acuna, who is about four months younger, and the 21-year-old Albies to give Atlanta the three youngest players in the majors.

The previous big league team to have three players as young as Albies in the same starting lineup was also the Braves — 40 years ago. Third baseman Bob Horner, second baseman Glenn Hubbard and center fielder Eddie Milner started in a 2-1 loss to Cincinnati on Sept. 24, 1978.

Syndergaard (2-1) settled down after his rough start and lasted six innings. But he allowed 10 of Atlanta's 15 hits, equaling a career high, and struck out a season-low three.

General manager Sandy Alderson was asked if he was upset about a Page Six report in the New York Post that embattled former ace Matt Harvey, recently relegated to the bullpen, was out partying in Los Angeles the night before pitching in San Diego last week. "Usually I get upset if a report is unexpected," Alderson said. "So I guess the short answer is no." Alderson said he didn't think Harvey's night out affected him or created a problem.

Braves: Soroka's contract was selected from Triple-A Gwinnett, allowing Atlanta to give Julio Teheran an extra day of rest before his next start. Teheran left Friday's outing with back tightness, but threw a bullpen Sunday and is slated to pitch the series finale Thursday afternoon. "He's fine. He's doing everything," manager Brian Snitker said. ... Snitker wouldn't commit to Soroka making more than a spot start in the majors. RHP Anibal Sanchez (strained right hamstring) threw about 60 pitches in a simulated game against teammates at Citi Field and could be ready to come off the DL to start Sunday at home against San Francisco. "He looked really good," Snitker said. ... RHP Shane Carle was removed after throwing two pitches in the seventh. He experienced numbness in his right index finger and thumb.

Mets: Cespedes hurt his left thumb sliding headfirst into third on a double steal Sunday in San Diego. He was pulled from the game and said afterward he thought he would miss three days. But the slugger soon felt fine when playing catch and hitting off a tee and didn't even need an MRI, Alderson said. ... Syndergaard pitched on regular rest in place of LHP Steven Matz (stiff back), who was skipped in the rotation and rescheduled to start Saturday against Colorado. Matz felt a little tender Monday after throwing his bullpen Sunday and wasn't available out of the bullpen, manager Mickey Callaway said. "We feel it won't be an issue by tomorrow," Callaway said. ... RHP Anthony Swarzak (strained left oblique) and C Kevin Plawecki (broken left hand) are healing slower than hoped, Alderson said.