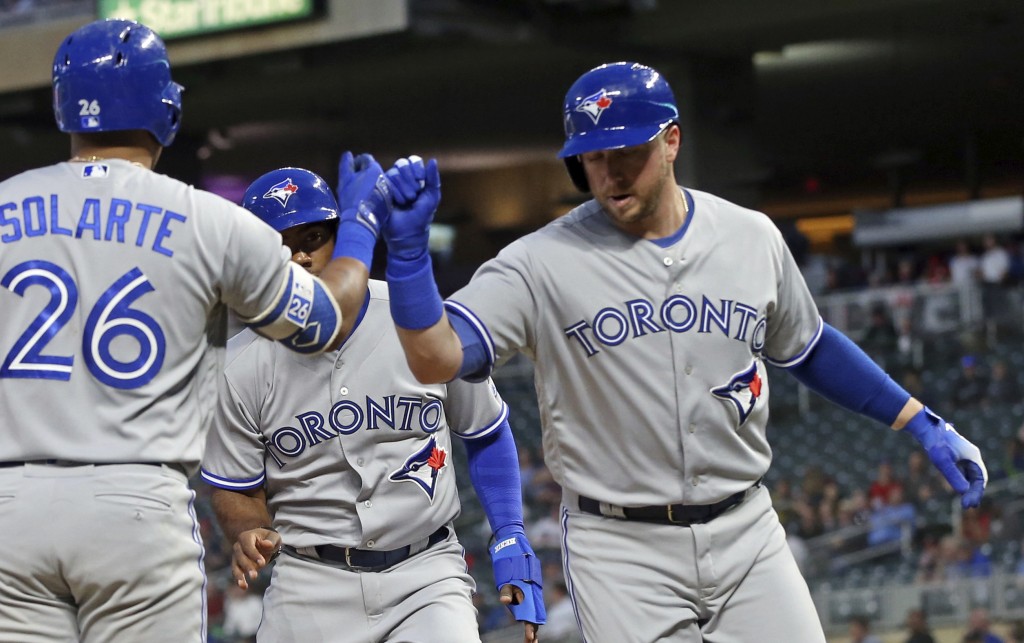 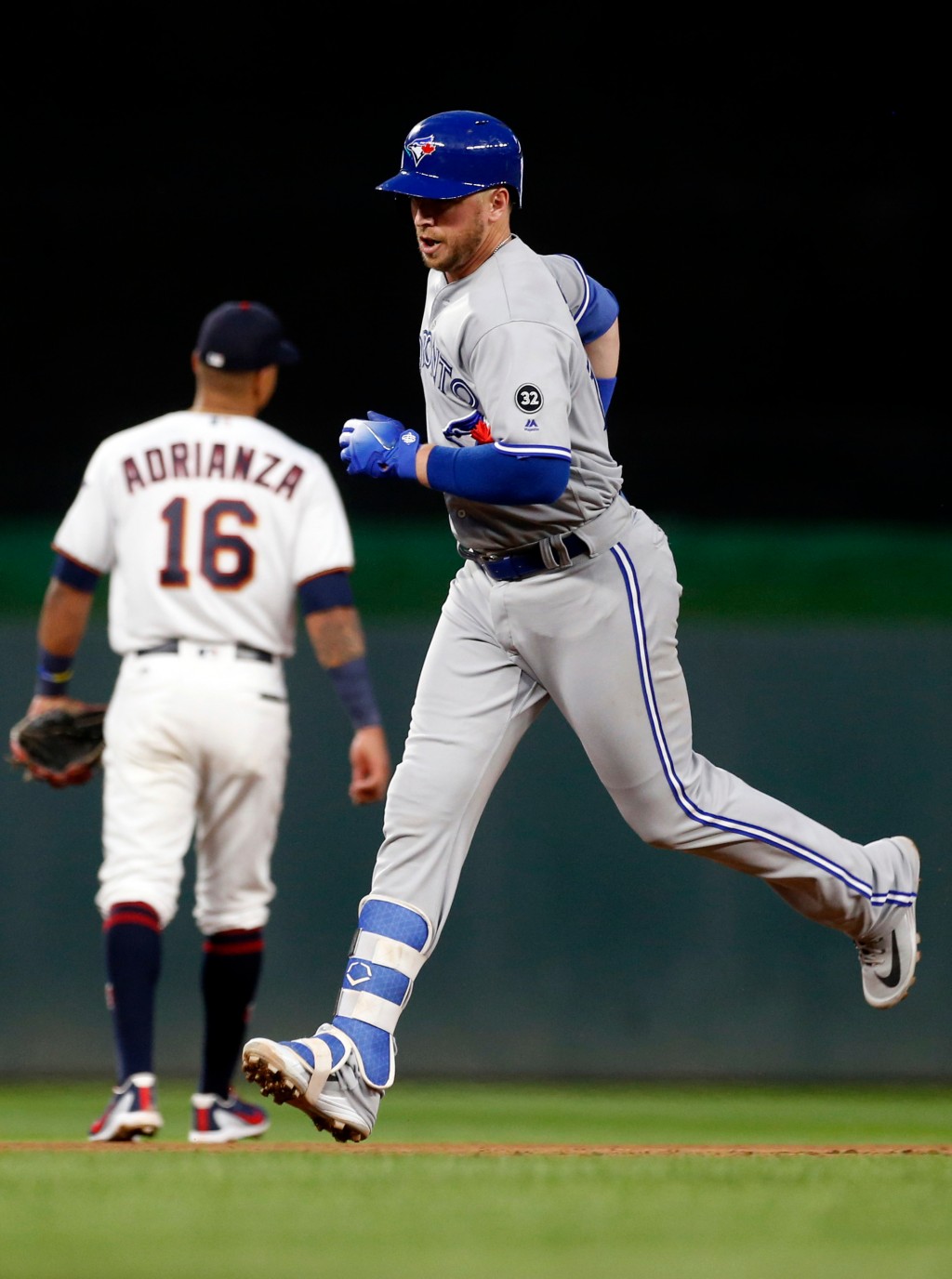 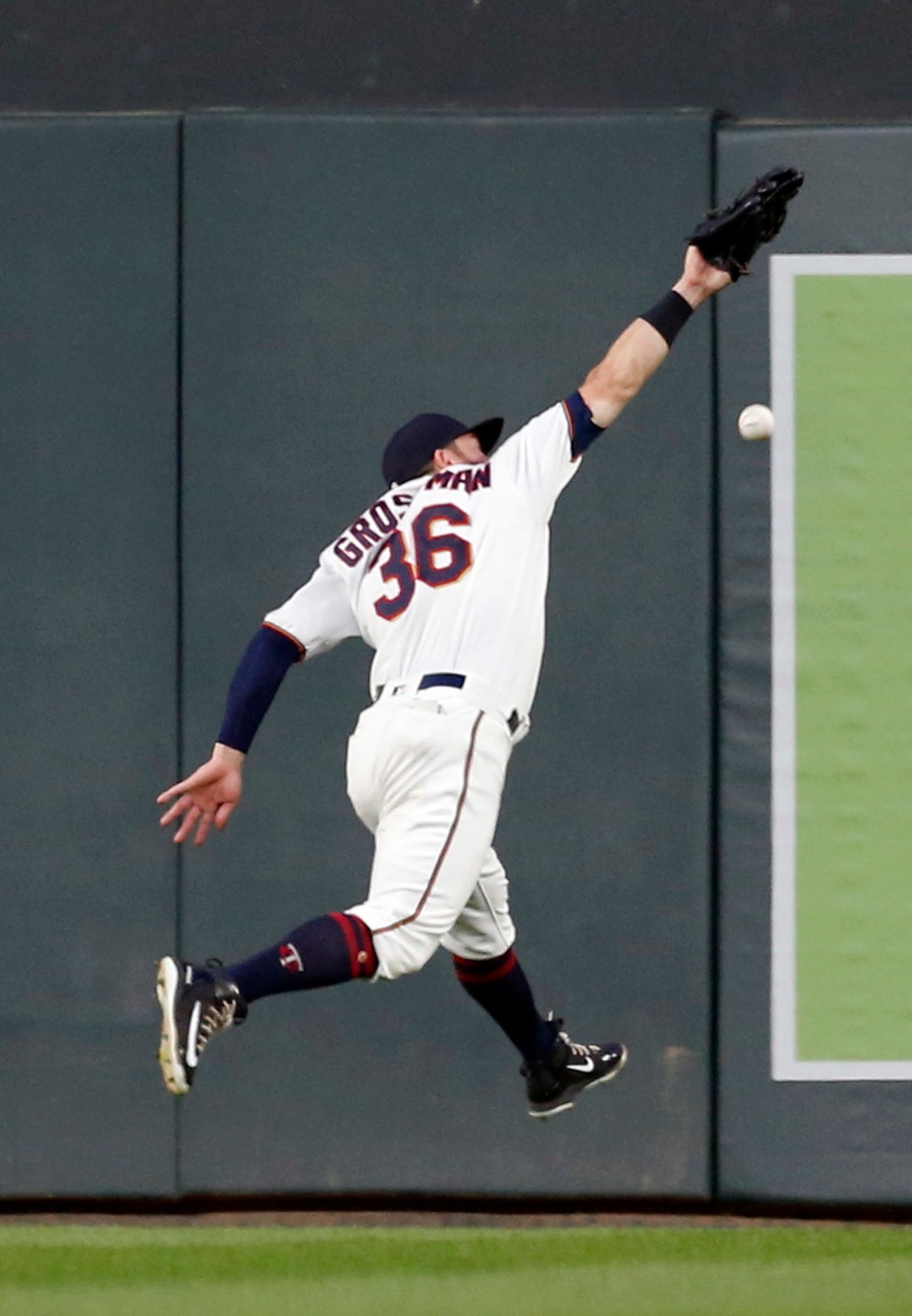 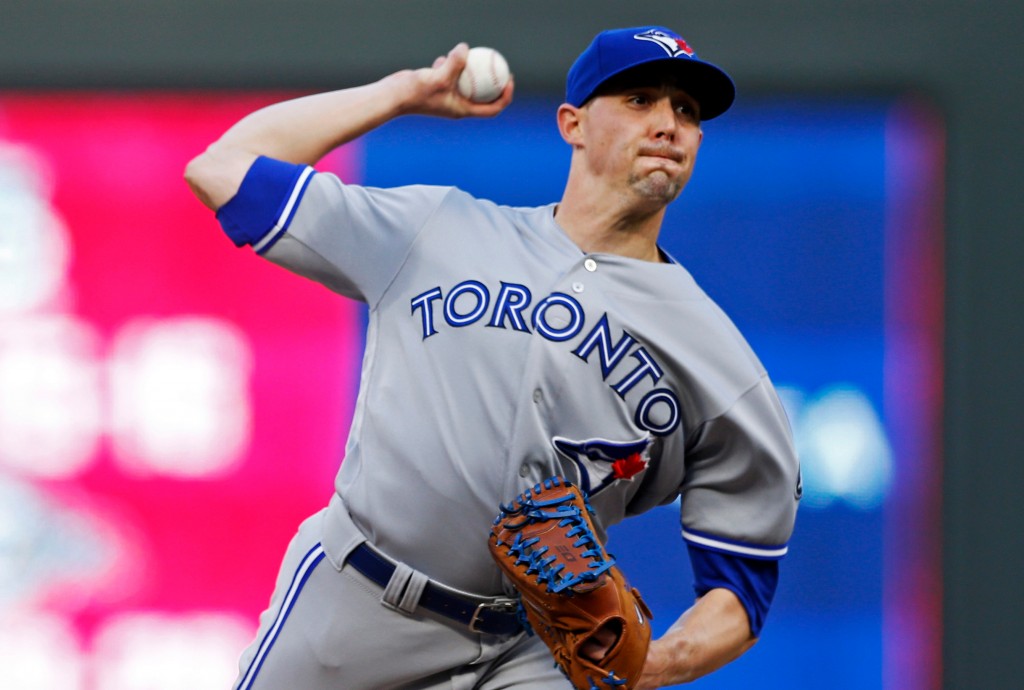 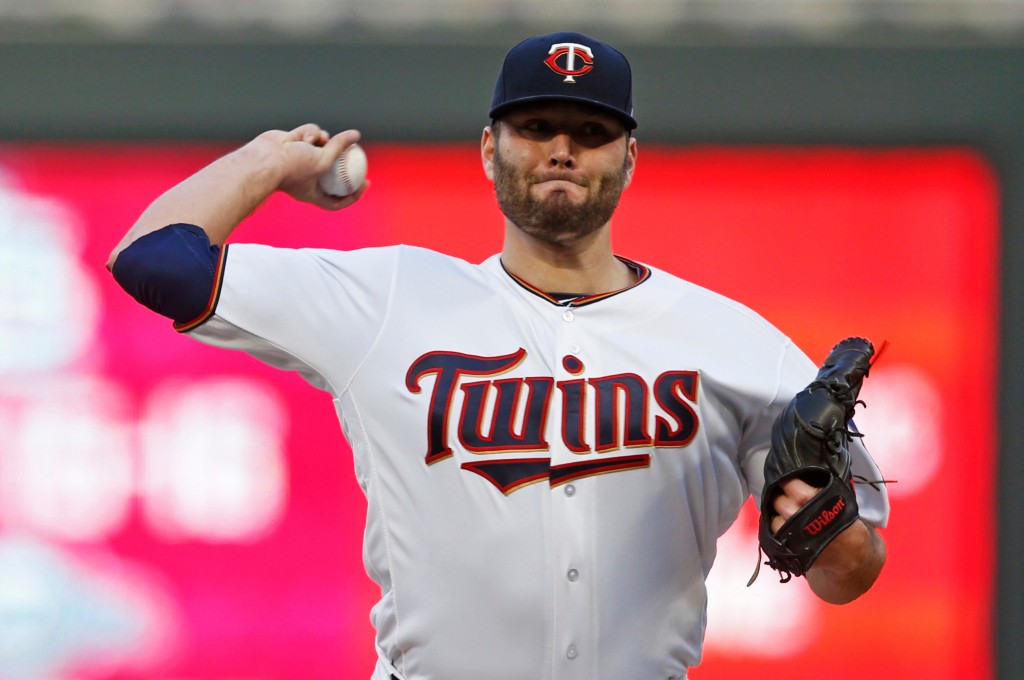 MINNEAPOLIS (AP) — Even with Josh Donaldson missing 16 games on the disabled list, Jose Bautista gone and Kendrys Morales off to a slow start, the Toronto Blue Jays are powering up again and supplying the offense they've become used to north of the border.

Justin Smoak and Russell Martin homered, Yangervis Solarte had three hits and Toronto edged the Minnesota Twins for a 7-5 win on Monday night.

Smoak hit a towering, two-run shot to cap a three-run fourth inning to stake the Blue Jays to a 5-0 lead. Martin added a solo homer to the second deck in left field an inning later as Toronto won its second game in a row.

"You're going to play many a game like that," Blue Jays manager John Gibbons said. "It never feels good. They had the tying run at second, but we got our closer out there. Bottom line, we won that thing. We had a chance early on to really blow it open."

Minnesota has lost 10 of its past 11 games after a rally against closer Roberto Osuna fell short in the ninth.

The Twins stranded runners on second and third as Osuna secured his seventh save in eight chances.

"There were some positives, Minnesota manager Paul Molitor said. "You kind of try to look for things when wins are hard to come by. Obviously, we've been facing a lot of deficits early in games."

Toronto slipped to last in the American League in scoring last season and was seventh in home runs in the AL. After hitting three home runs in Sunday's win, the Blue Jays entered the night tied for second in the majors in homers this season and were fifth in runs scored.

Aaron Sanchez (2-2) was the beneficiary of the run support. He pitched six innings and allowed four runs and six hits and three walks.

Minnesota's Lance Lynn (0-3) struggled with his command again and couldn't get past the fifth inning for the fourth time in five starts this season. Lynn gave up six runs in five innings. He allowed seven hits and walked five batters. He has an 8.37 ERA for the season.

At one point, he threw nine straight balls and he walked Curtis Granderson with the bases loaded in the second.

"I'm going to be all right," Lynn said. "I've just got to be me and attack hitters and make pitches. I've got the ability to do that. I've showed that over the course of my career. And now I've just got to go do it."

Eduardo Escobar hit his fourth homer of the season for Minnesota, a two-run blast to straightaway center in the fifth.

Max Kepler had three hits, including an RBI double in the seventh, but Logan Morrison popped out with two runners on in the inning against reliever Danny Barnes.

LIKES WHAT HE SEES

Toronto has had an inconsistent start overall but ended April 16-12, their first winning opening month since 2012. The Jays started 12-3, then lost seven of 10 before the back-to-back wins.

"I like this team," Gibbons said. "It's only going to get better whenever Josh comes back. I think our rotation will pick it up. Once that happens, we got a chance to be really good."

Reliever John Curtiss made his season debut for the Twins after being recalled from Triple-A Rochester earlier in the day. Curtiss retired the only batter he faced.

The right-hander is just the latest in a series of pitching moves for Minnesota, which has had a transaction involving a pitcher each of the past five days and nine times since April 21 as the Twins try to piece together innings from the bullpen.

Another move is likely coming, as well, as Molitor announced Phil Hughes is being moved to the bullpen to work on his issues and right-hander Fernando Romero will be recalled to start Wednesday's series finale. Romero, 23, is considered the team's top pitching prospect and has pitched just four games above Double-A in six minor league seasons.

Blue Jays: OF Randal Grichuk was placed on the 10-day disabled list with a right knee sprain, the result of an awkward, diving catch in Sunday's win against Texas. The team recalled IF Gift Ngoepe from Triple-A Buffalo.

Twins: 3B Miguel Sano missed his third straight game with left hamstring tightness. Molitor said Sano has not made much progress and could be looking at a stint on the disabled list if he doesn't show improvement soon. ... OF Byron Buxton, on the 10-day disabled list after a migraine first sidelined him, stood in while pitchers threw their bullpens on Monday but isn't ready to run because of a hairline fracture in his toe.