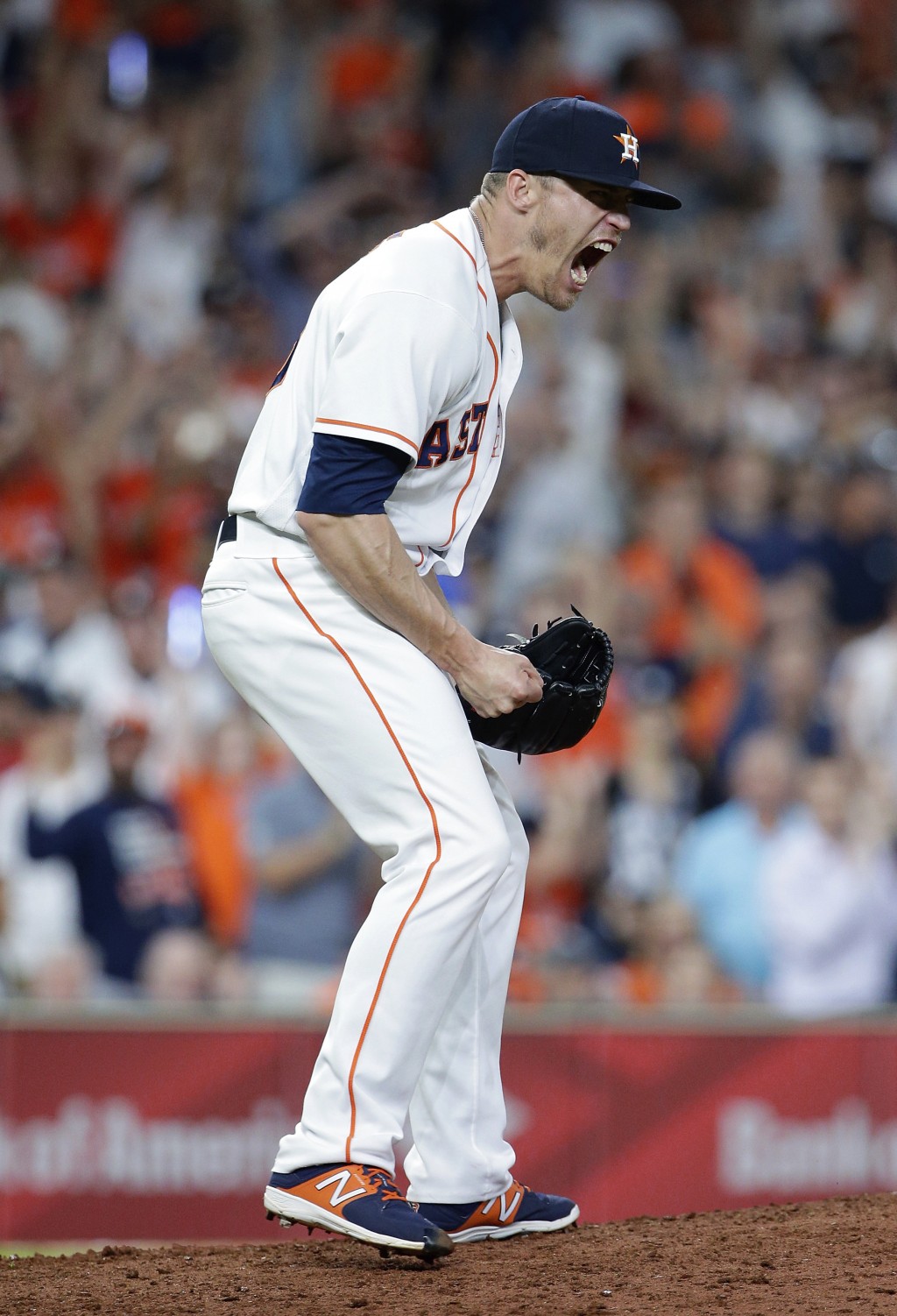 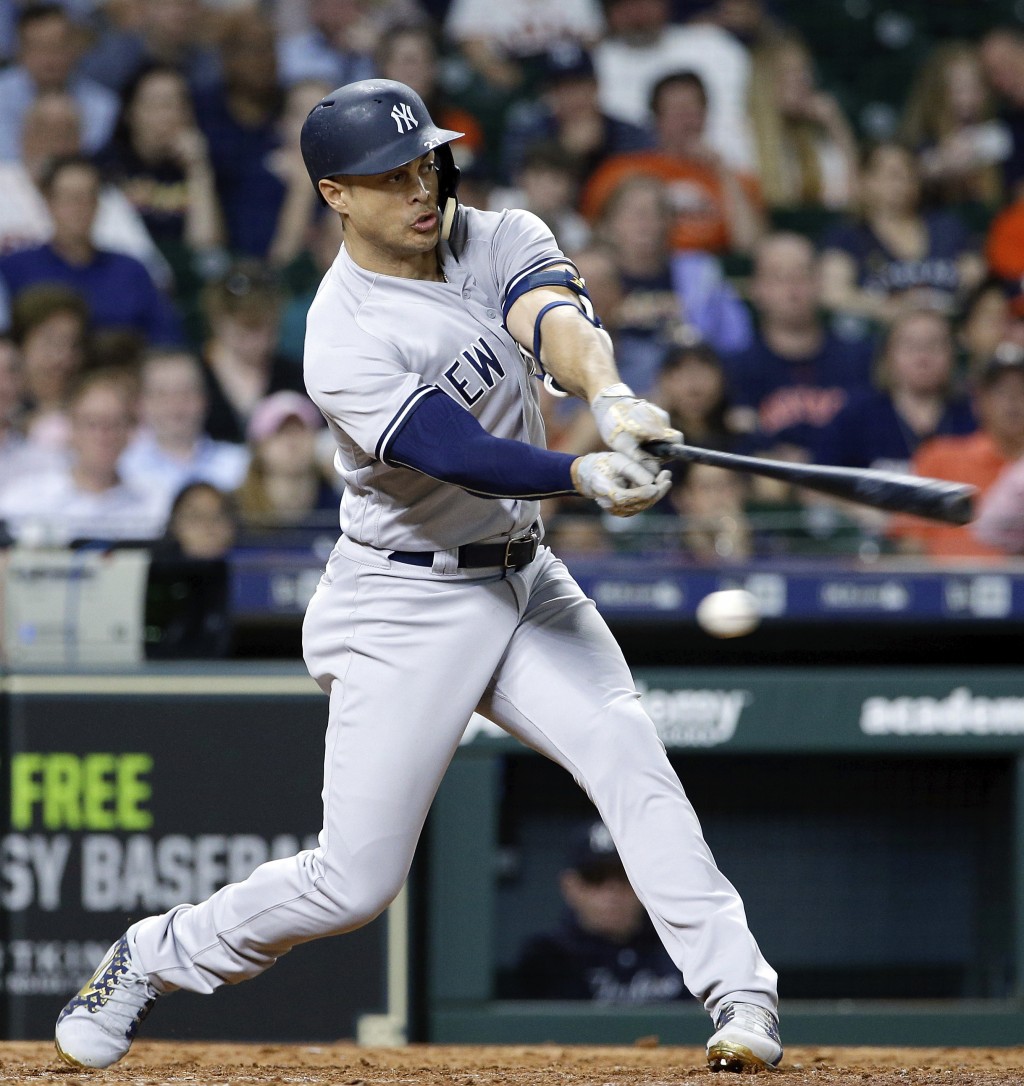 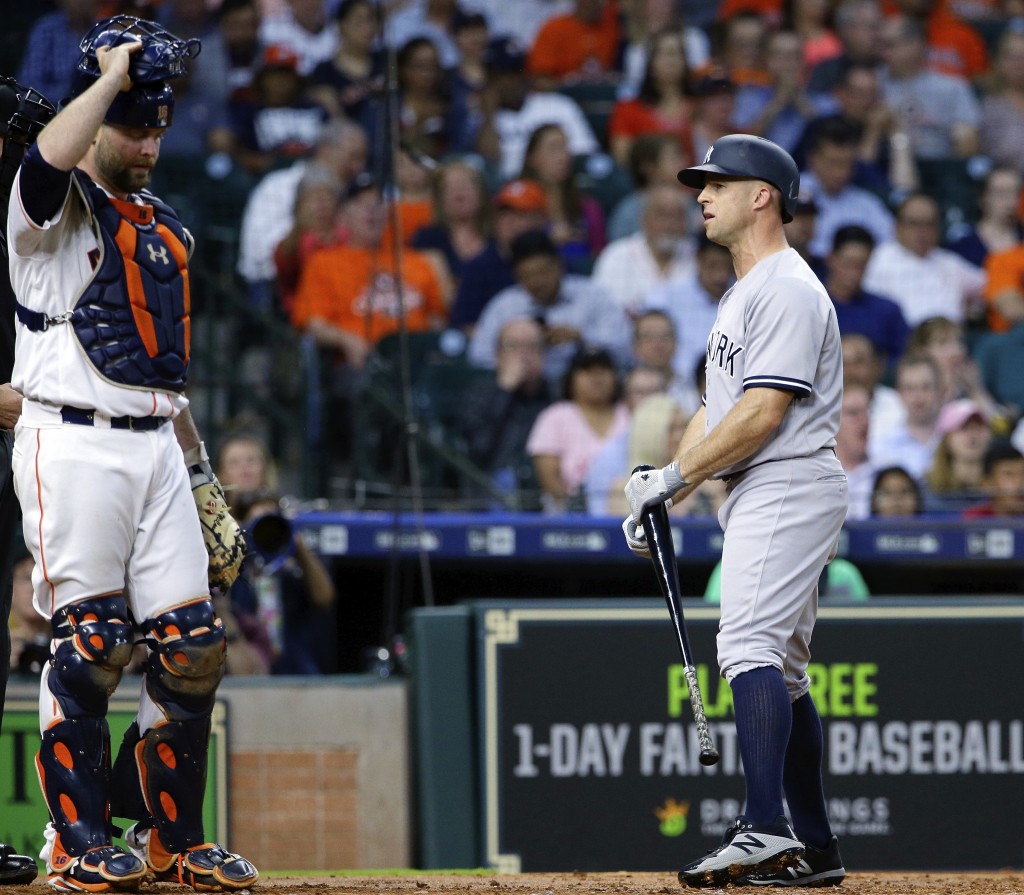 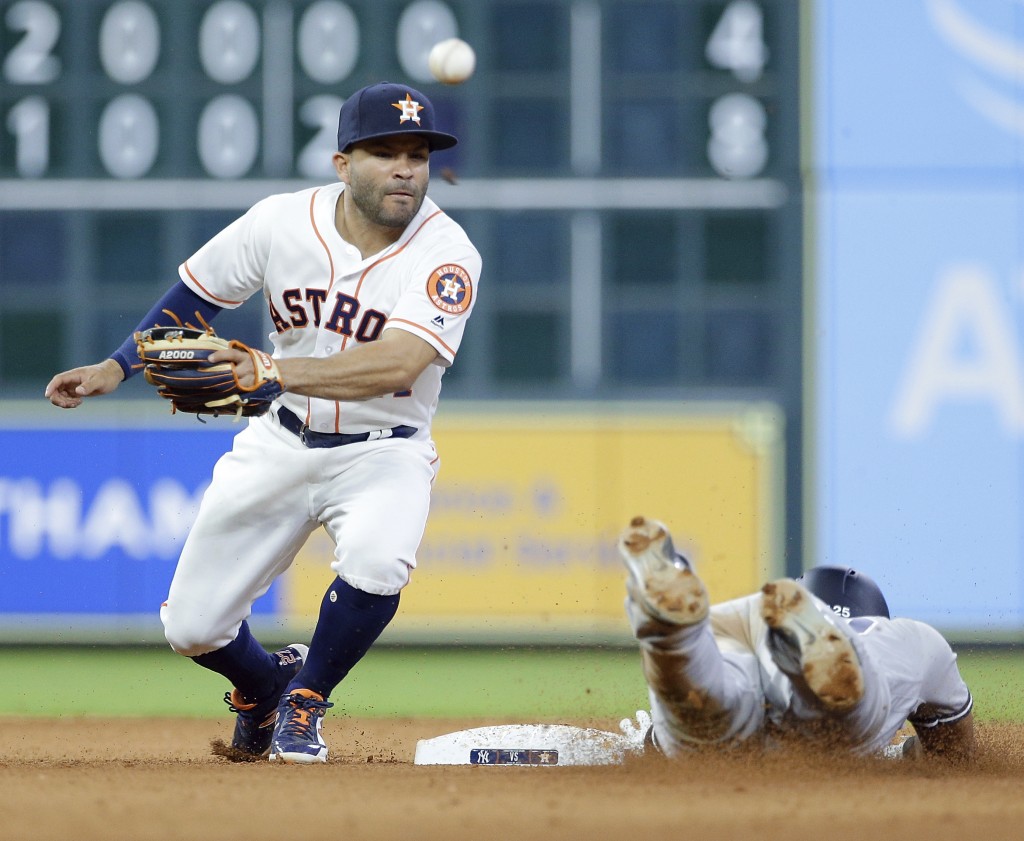 Carlos Correa had two hits and an RBI for Houston in the first meeting between the teams since Game 7 of last year's AL Championship Series, when Morton allowed two hits over five innings for the win in a 4-0 victory that sent the Astros to the World Series.

Houston has won seven straight at home against the Yankees including the postseason, holding them to no more than one run in their past six games here.

Morton (4-0) had allowed just one hit when Gleyber Torres chased him with a two-out double in the eighth. Brad Peacock walked pinch-hitter Aaron Judge, who didn't start for the first time this season, and Torres stole third base.

Chris Devenski was greeted with an RBI single by Brett Gardner that cut the lead to 2-1. Devenski then fanned AL player of the week Didi Gregorius on three pitches to end the inning.

Ken Giles struck out the side in the ninth for his third save.

Sonny Gray (1-2) allowed four hits and two runs while walking three in six innings to snap a streak of three straight starts in which he didn't get out of the fifth inning.

BOSTON (AP) — Xander Bogaerts hit a grand slam over the Green Monster and Boston finished April with its most wins ever by beating Kansas City.

Mitch Moreland hit a solo homer and had three hits along with Bogaerts for the Red Sox, who posted their 19th victory in April. They had reached 18 three times, the last coming in their World Series-winning 2013 season.

Whit Merrifield had three hits and two RBIs for the Royals, who were coming off their first consecutive wins this season.

Hector Velazquez (4-0), the first of three relievers, worked two scoreless innings of relief for the victory.

Trailing 3-0, Boston scored a run in the second on Moreland's homer and five off Jason Hammel (0-3) in a third inning highlighted by Bogaerts' slam that completely left Fenway Park. Moreland drew a bases-loaded walk for the other run.

It was Boston's sixth slam of the season, tying the 1996 Montreal Expos for most ever in the majors by May 1.

Zack Greinke struck out a season-high 10 in six innings as Arizona won for the 12th time in the last 13 regular-season meetings — six of seven this year. In the 2017 playoffs, however, the Dodgers cruised to a three-game sweep of the Diamondbacks.

Nick Ahmed drove in two runs and fell a triple shy of the cycle for the first-place Diamondbacks.

The NL champion Dodgers, who found out earlier in the day that star shortstop Corey Seager is headed for season-ending Tommy John surgery, have lost three straight and six of seven to fall to 12-16, eight games behind Arizona. The Diamondbacks (20-8) have the best record in the National League and second-best in baseball behind Boston (21-7).

Brad Boxberger earned his ninth save in nine tries.

The Giants scored in only two innings and trailed 5-3 in the ninth before rallying for their third straight win and seventh in nine games.

Evan Longoria hit an RBI single with two outs before Hand (1-3) walked Brandon Belt to load the bases, setting the stage for Hundley.

Pierce Johnson (1-1) retired three batters for the win, and the Giants improved to 6-2 on their 10-game homestand.

CHICAGO (AP) — Jon Lester pitched effectively into the sixth inning, continuing an impressive stretch for Chicago's rotation and helping the Cubs beat the Colorado for their season-high fifth straight victory.

Lester allowed two runs and five hits, struck out five and walked three. Luke Farrell (1-0) worked 1 1/3 innings of perfect relief for his first career win, and Steve Cishek got two outs for his first save.

The Rockies put runners on first and second with two outs in the ninth before Cishek struck out Nolan Arenado.

Lester extended the streak for Chicago's starting pitchers to 33 2/3 innings without giving up an earned run. The Cubs have permitted just four runs and 21 hits during their last five games.

Colorado wasted a solid start by Kyle Freeland (1-4) in its third straight loss. The left-hander pitched seven innings of three-run ball, allowing six hits with five strikeouts and one walk.

The Brewers managed only two runs while getting swept four games at Wrigley Field, matching their lowest total for a four-game series. They had 14 hits total, their worst for such a series, and were blanked on two hits in each of the past two games.

Wandy Peralta (1-2) gave up a hit and a pair of walks to fuel the rally. A throwing error by catcher Tucker Barnhart let in one run, and Santana doubled over Billy Hamilton's head in center field for a 6-5 lead.

Brandon Woodruff (1-0) retired the four batters he faced. Josh Hader got the last eight outs — all on strikeouts — for his fourth save in as many chances.

Texas scored twice in the top of the eighth to go ahead 4-3, but the Indians quickly regained the lead by scoring four times against Chris Martin (0-1).

Cody Allen (2-0) pitched 1 1/3 innings. The right-hander put two runners on with one out in the ninth. Jurickson Profar grounded out, but Nomar Mazara's infield hit cut the deficit to 7-5.

Allen, the Indians' closer, was pulled after throwing 41 pitches. Jeff Beliveau fell behind Joey Gallo 3-0, but came back to strike him out for his first save of the season and second of his career.

Roark (2-2) allowed two runs and six hits, struck out four and induced two double play grounders for his first win since April 2 as the Nationals ended a disappointing April with their second straight victory.

Starting pitcher Jameson Taillon (2-3) drove in the first run for the Pirates with a two-out double to deep left-center in the fifth. He worked six innings, allowing three runs on seven hits, as NL Central-leading Pittsburgh lost for the first time since his previous start. The Pirates had won five straight.

Brandon Kintzler worked the ninth for his first save in place of regular closer Sean Doolittle, who had pitched in the previous three games.

Smoak hit a towering, two-run shot to cap a three-run fourth inning to stake Toronto to a 5-0 lead. Martin added a solo homer to the second deck in left field an inning later as the Blue Jays won their second game in a row.

Aaron Sanchez (2-2) was the beneficiary of the run support. He pitched six innings and allowed four runs and six hits and three walks. Roberto Osuna allowed two hits in the ninth, but stranded runners at second and third to earn his seventh save in eight chances.

Minnesota's Lance Lynn (0-3) struggled with his command again and couldn't get past the fifth inning for the fourth time in five starts this season. Lynn gave up six runs in five innings. He allowed seven hits and walked five batters. He has an 8.37 ERA for the season.

MIAMI (AP) — Brian Anderson homered, drove in four runs and made a diving catch in right field with the bases loaded to preserve a lead, helping Miami beat Jake Arrieta and Philadelphia.

The Marlins have won three games in a row for the first time this season, and five of six. The Phillies lost their third consecutive game.

Arrieta (3-1) lasted only 3 2/3 innings. He allowed six earned runs after giving up three or fewer in each of his past 18 starts.

Jorge Alfaro and Maikel Franco each hit a two-run homer off Dan Straily.

The Phillies' Odubel Herrera singled in the first inning to reach base safely in his 30th consecutive game, the longest active streak in the majors.

DETROIT (AP) — C.J. Cron and Brad Miller each homered in the ninth inning and Tampa Bay held on for a victory over Detroit.

With the game scoreless, Detroit closer Shane Greene (1-2) walked Denard Span to start the ninth. Cron followed by hitting a 2-0 fastball into the right-center field seats for his seventh homer of the season. After Matt Duffy popped out, Brad Miller homered into the left-field bullpens to make it 3-0 and end Greene's night.

But Detroit loaded the bases with one out in the bottom of the ninth on two hit batters and an infield single. Jose Alvarado replaced Chaz Roe and allowed a two-run single to Victor Martinez, then retired James McCann before walking John Hicks to load the bases again. Dixon Machado then grounded into a game-ending force at second to give Alvarado his first career save.

Rays starter Jake Faria (2-1) had the longest outing of his career, holding the Tigers scoreless for eight innings. He gave up three hits and a walk with six strikeouts in his second win in 11 starts.