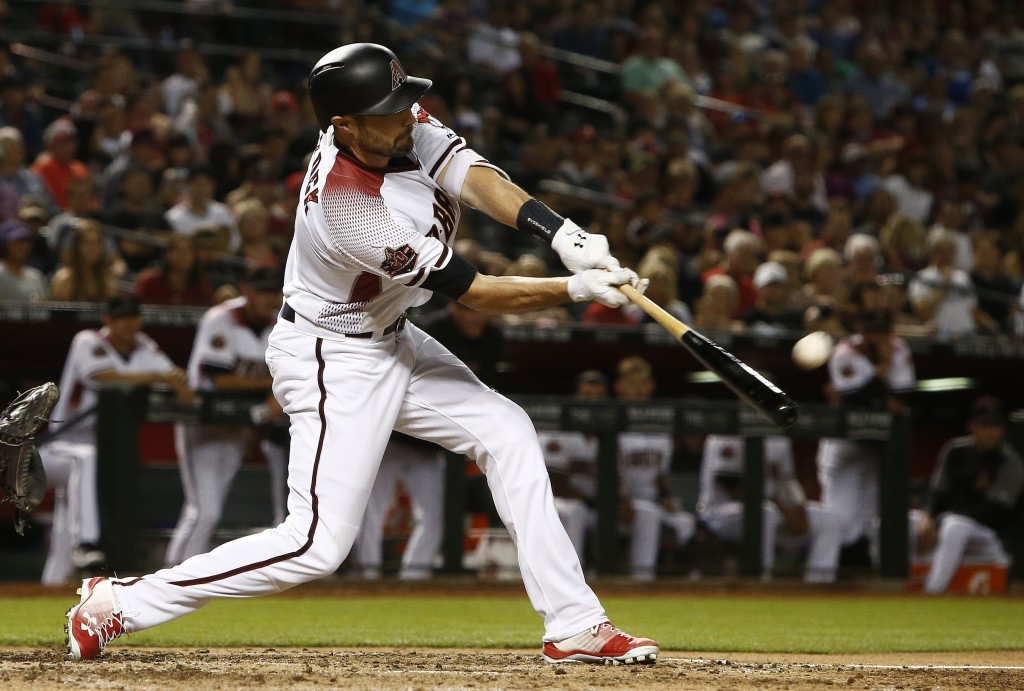 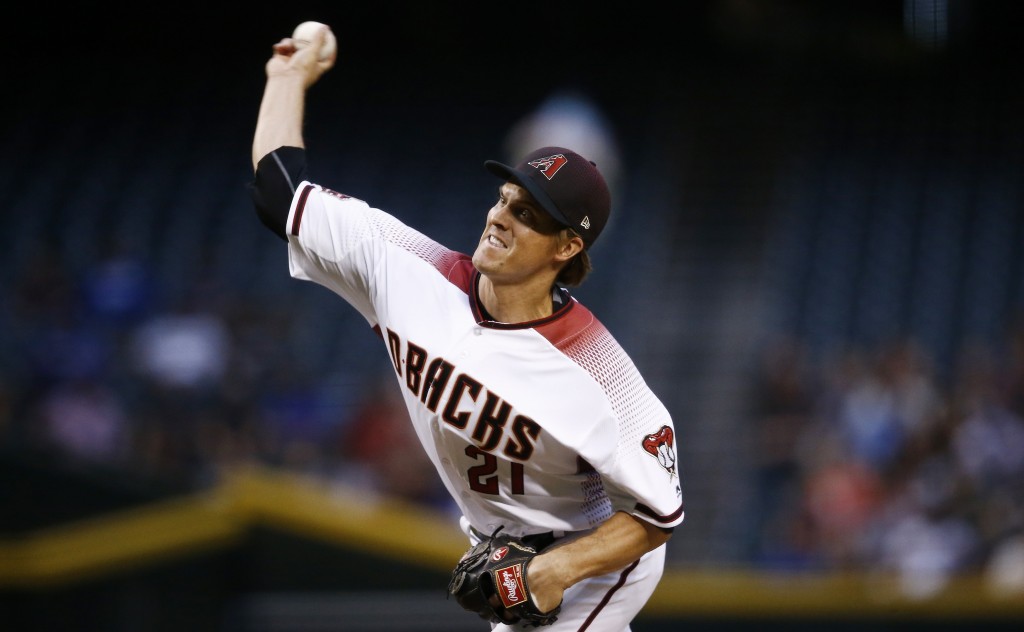 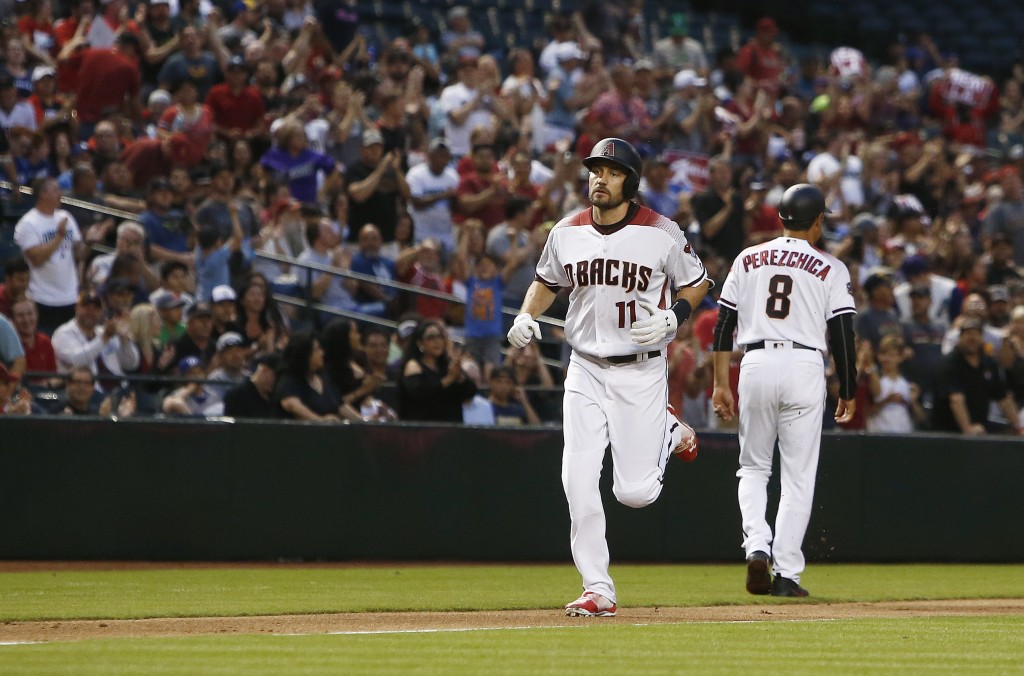 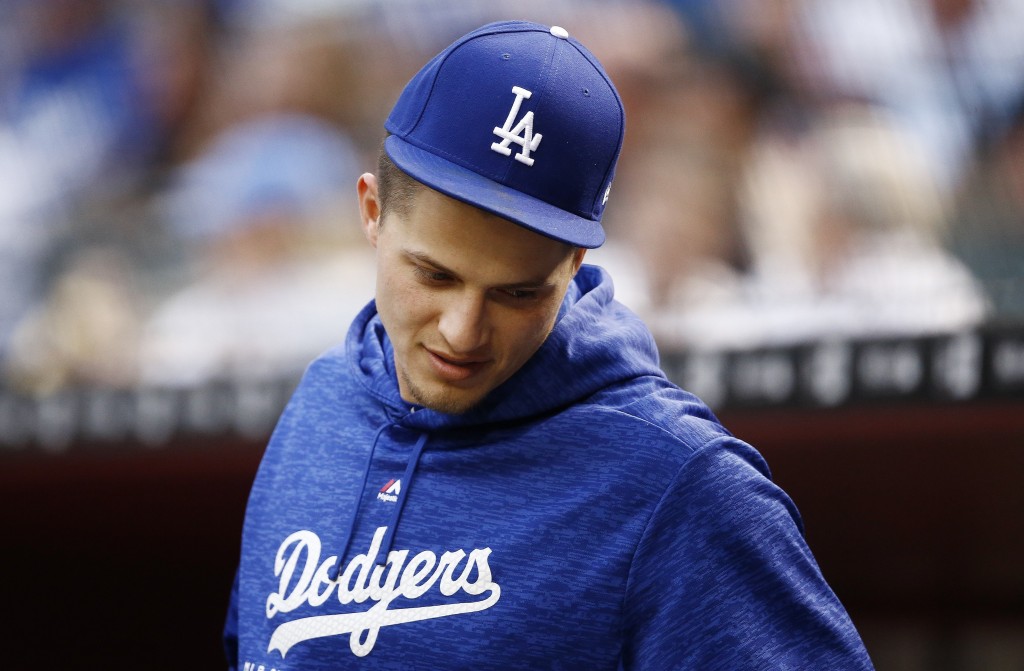 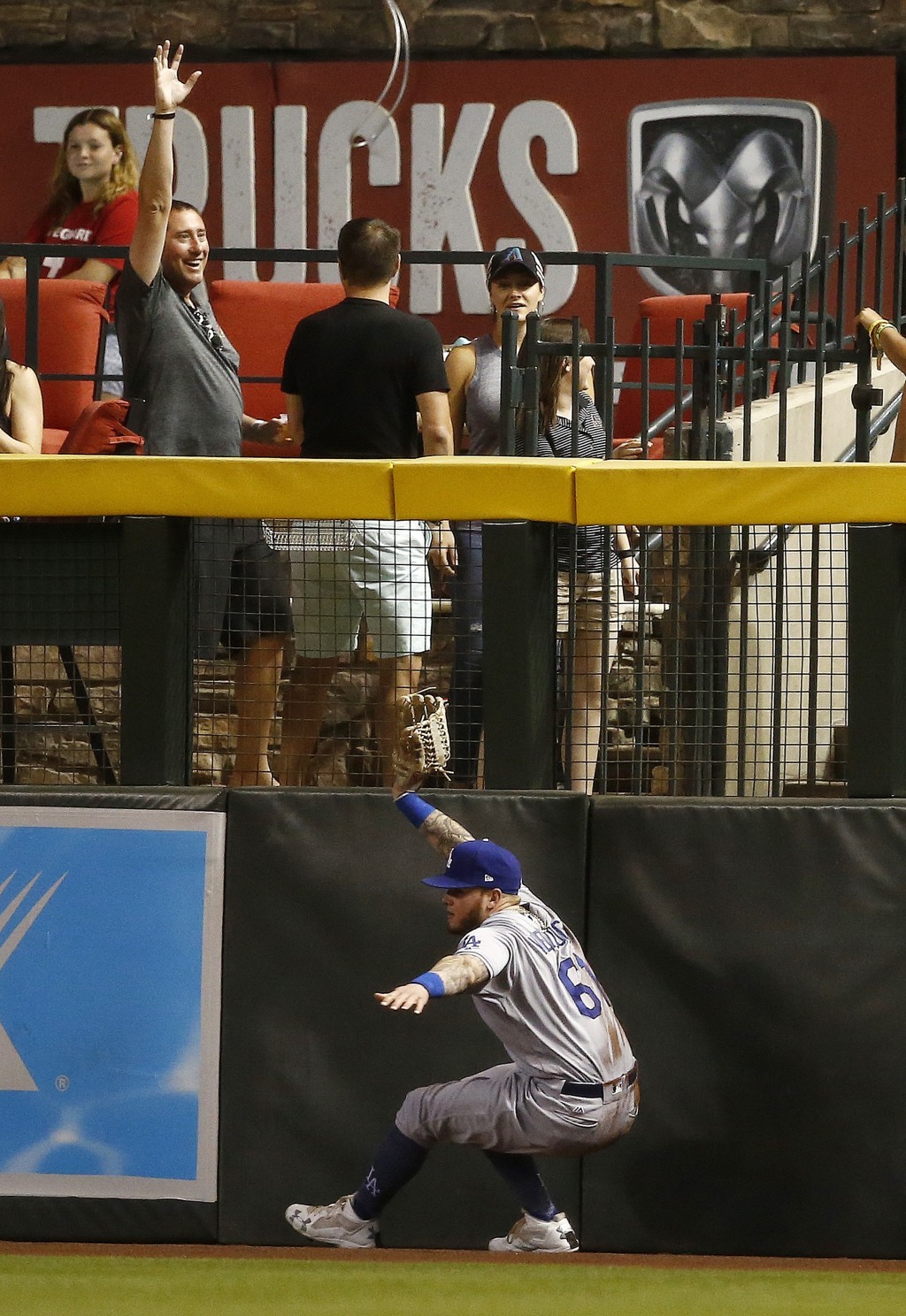 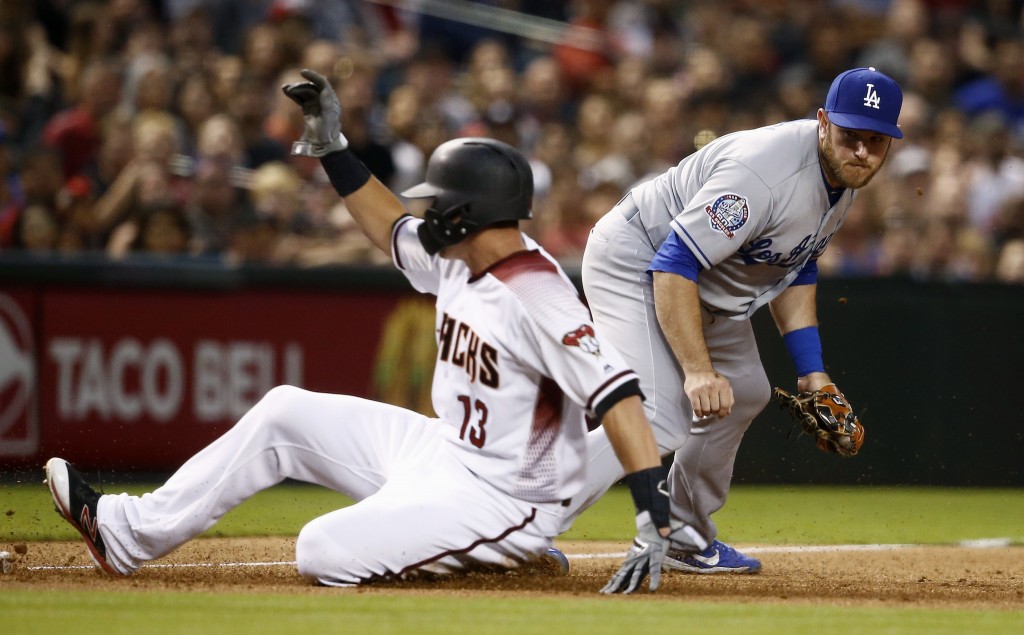 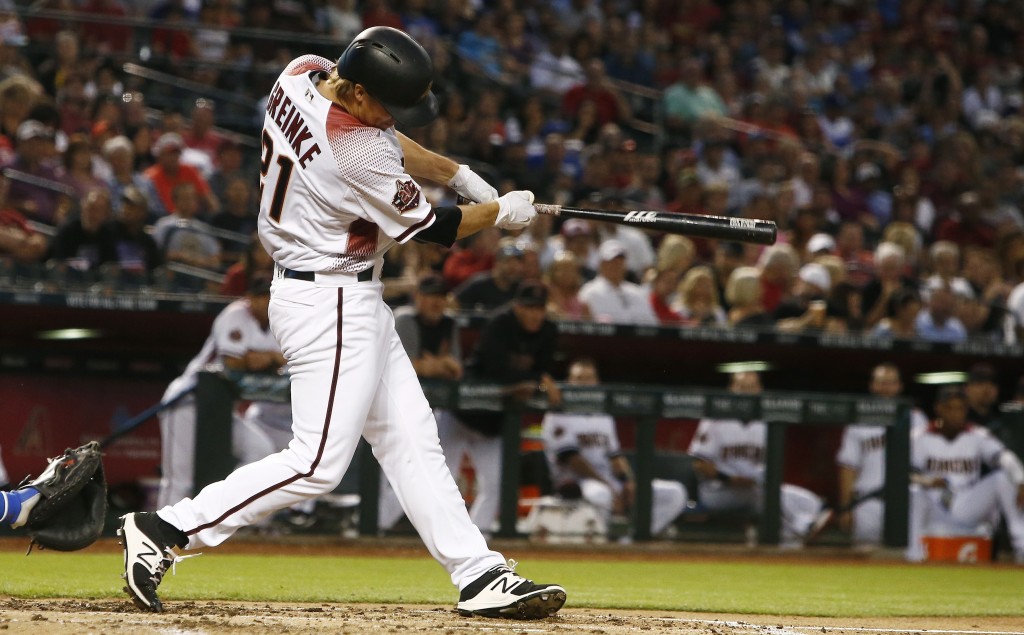 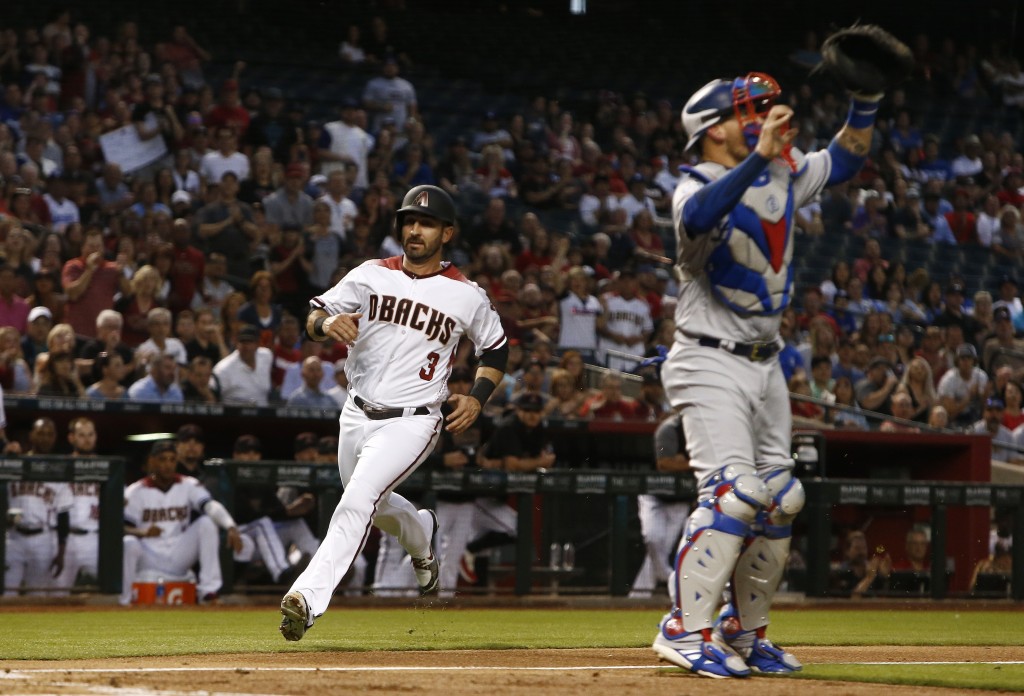 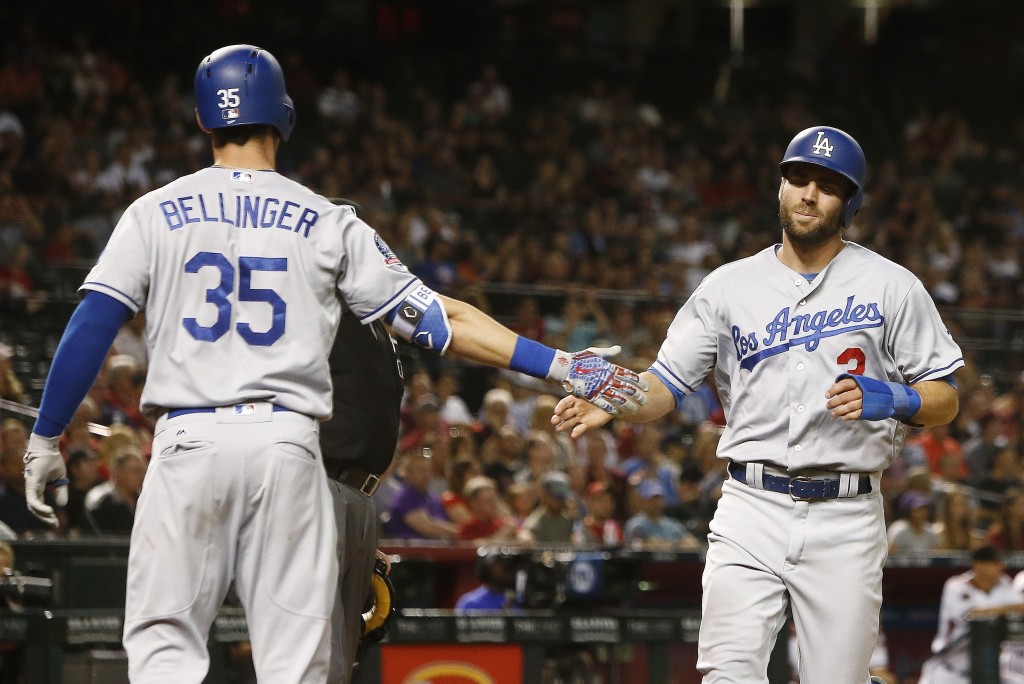 Zack Greinke struck out a season-high 10 in six innings as Arizona beat Los Angeles for the 12th time in their last 13 regular-season meetings — six of seven this year. In the playoffs last year, however, the Dodgers cruised to a three-game sweep of the Diamondbacks.

All three of Pollock's drives were solo shots in the first three-homer game of his career. He connected off Ross Stripling in the second, Brock Stewart in the sixth and Josh Fields in the eighth to become the 12th Arizona player with a three-homer game.

Pollock had a two-homer game at Dodger Stadium on April 14.

Nick Ahmed drove in two runs and fell a triple shy of the cycle for the first-place Diamondbacks, who have won each of their first nine series to start the season — the first National League team to do so since the 1907 Chicago Cubs.

The reigning NL champion Dodgers, who found out earlier in the day that star shortstop Corey Seager is headed for season-ending Tommy John surgery, have lost three straight and six of seven to fall to 12-16, eight games behind Arizona. The Diamondbacks (20-8) have the best record in the National League and second-best in baseball behind Boston (21-7).

They opened a seven-game homestand that features the Dodgers and Houston, last year's World Series teams.

Greinke (3-2) blanked his old team on one hit through five innings before allowing a pair of runs in the sixth. He gave up two runs on four hits and walked one and is 15-1 in his last 20 starts at Chase Field.

Greinke also singled in a run and doubled, his first two hits of the season.

Brad Boxberger pitched a perfect ninth for his ninth save in nine tries.

Rich Hill was supposed to come off the disabled list to make the start for the Dodgers but remained sidelined with an infected finger, so Ross Striping got the spot start. Stripling (0-1) went four innings, allowing four runs and eight hits.

Arizona scored three times in the second. Pollock led off with a home run down the left-field line. Daniel Descalso doubled and scored on Ahmed's one-out single. With two down, Greinke's first hit of the season scored Ahmed.

Ahmed homered in the fourth and Pollock in the fifth to make it 5-0.

Los Angeles came back and Max Muncy homered off Yoshihisa Hirano in the seventh to cut the lead to 5-3.

Arizona added two in the seventh but so did the Dodgers, the last on Matt Kemp's pinch-hit RBI single off Archie Bradley, to make it 7-5 heading to the bottom of the eighth.

Pollock's final homer of the night, and ninth of the season, boosted the lead to 8-5.

Both teams had significant new injury problems to deal with on Monday.

Seager, the 2016 NL Rookie of the Year, will undergo season-ending Tommy John surgery. An MRI confirmed the need for the surgery after Seager experienced pain and numbness following a pair of throws over the weekend.

Seager has had soreness in the arm since the middle of last season.

Meanwhile, Arizona left-hander Robbie Ray was placed on the 10-day DL with a strained oblique, with no timetable for his return. An All-Star and 15-game winner last season, Ray left in the second inning of Sunday's loss at Washington.

The Diamondbacks are now without two of their original five starters. Right-hander Taijuan Walker is out for the season after undergoing Tommy John surgery.

Dodgers: Manager Dave Roberts said the surgery on Seager would be performed Friday in Los Angeles.

Diamondbacks: David Peralta left after being hit in the hand by a pitch from Tony Cingrani with the bases loaded in the seventh.