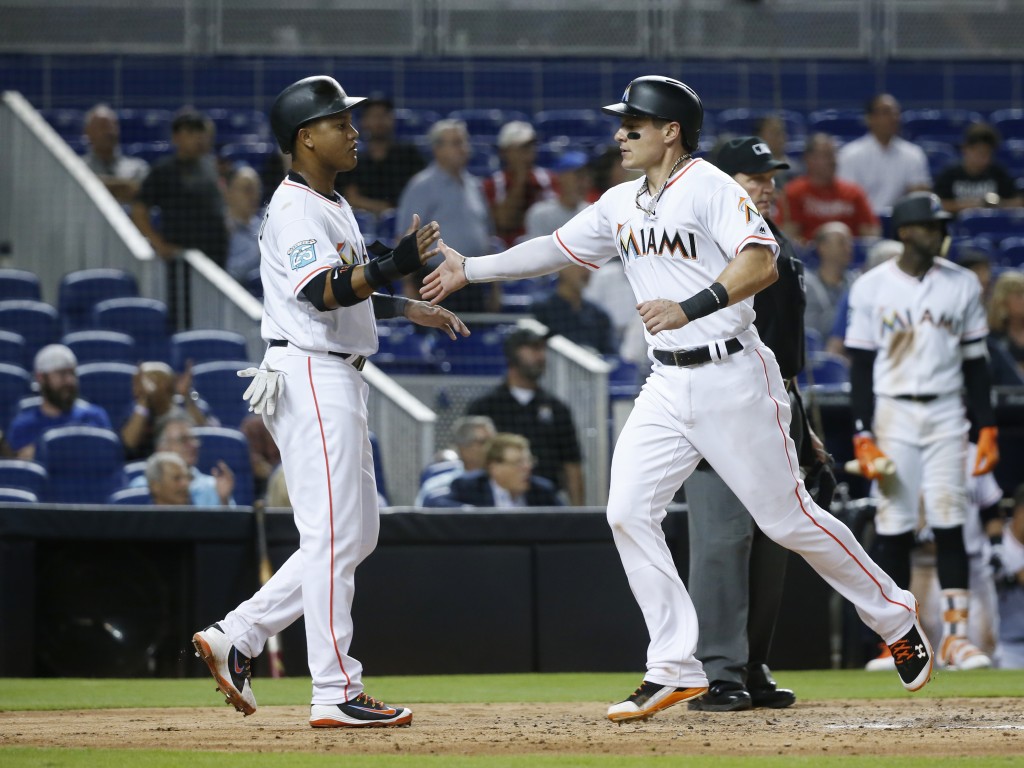 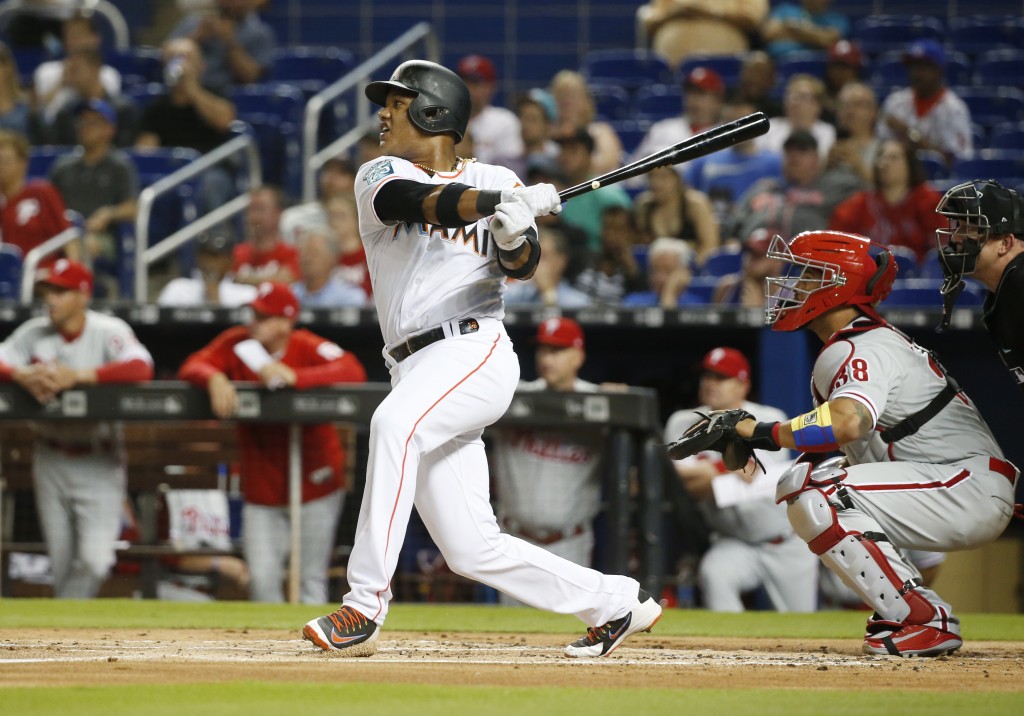 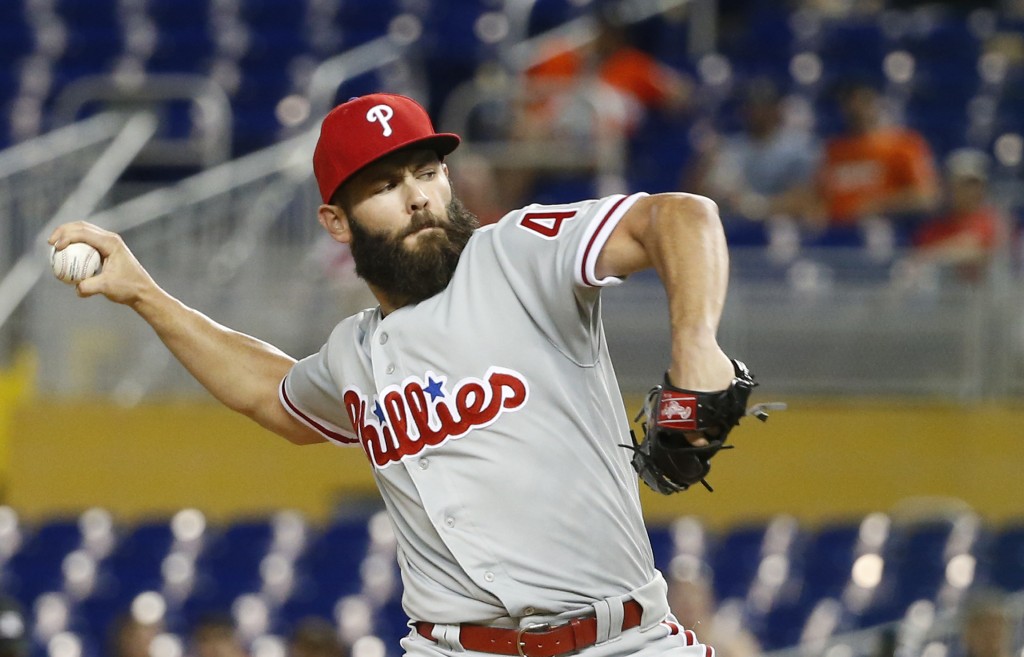 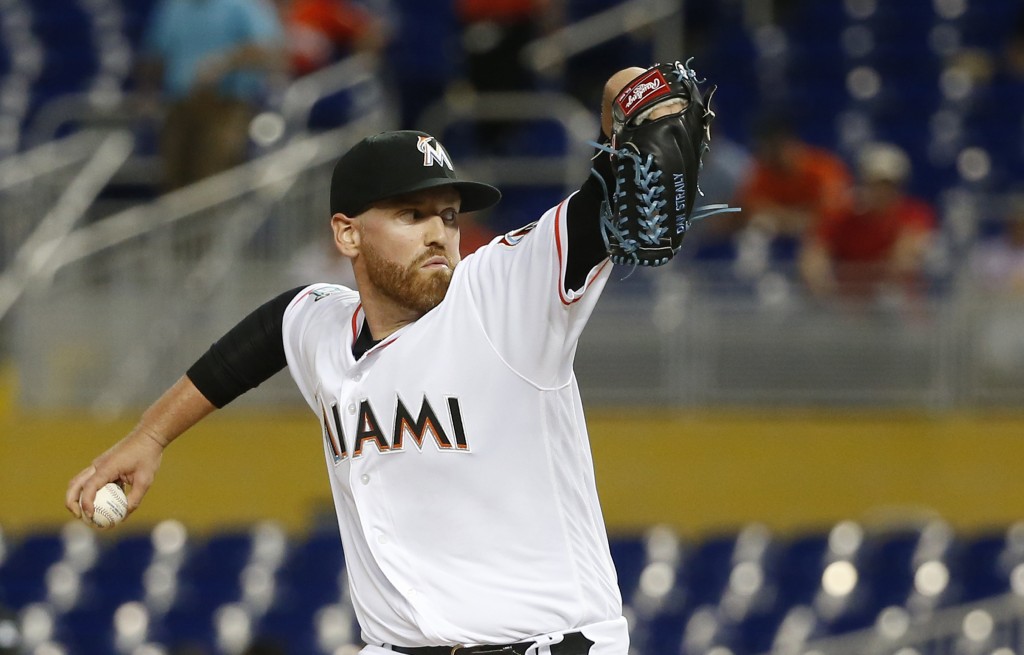 MIAMI (AP) — Brian Anderson homered, drove in four runs and made a diving catch in right field with the bases loaded to preserve a lead, helping the Miami Marlins beat Jake Arrieta and the Philadelphia Phillies 8-4 Monday night.

The Marlins have won three games in a row for the first time this season, and five of six. The Phillies lost their third consecutive game.

Arrieta (3-1) lasted only 3 2/3 innings. He allowed six earned runs after giving up three or fewer in each of his past 18 starts.

The Marlins reached him for eight hits, including five doubles. They came into the game with 29 doubles, last in the majors.

Anderson hit a two-run double in the third, the first of his three hits, and added a Stanton-esque two-run homer high off the home run sculpture in the seventh. Just as impressive was the rookie's lunging, backhand catch with one out in the seventh, which helped Kyle Barraclough escape a jam as the Marlins retained a 6-4 lead.

The homer was the second for Anderson, who leads the Marlins with 16 RBIs. Few saw his big game — the crowd of 5,415 was the smallest in the seven-season history of Marlins Park.

Miami starter Dan Straily wasn't sharp in his season debut, allowing four runs in four innings. He had been sidelined since the middle of spring training because of forearm inflammation.

Jorge Alfaro and Maikel Franco each hit a two-run homer off Straily.

The Phillies' Odubel Herrera singled in the first inning to reach base safely in his 30th consecutive game, the longest active streak in the majors.

Miami scored four runs in the third to take a 5-2 lead. Derek Dietrich hit an RBI double, and Anderson followed with a two-run double.

Herrera, who made a sensational catch in the bushes at Philadelphia on Saturday, made a leap at the center-field wall but couldn't come up with Dietrich's drive.

The Phillies are set to take the hill on "The Goldbergs."

In the episode "Opportunity Of A Lifetime," Barry Goldberg wins a SportsRadio WIP contest to throw out the first pitch at a Phillies game at Veterans Stadium.

The idea for the episode was sparked last season when the real Barry Goldberg and the actor who portrays him on TV, Troy Gentile, were invited to throw out the first pitch at a Phillies game. "The Goldbergs" draws on the childhood and videotaped domestic life of series creator Adam F. Goldberg, a native of the Philadelphia suburbs.

The first-pitch experience turned into a natural story line for Barry Goldberg.

"His first reaction when I asked him about it, he said, 'My throw is so powerful that it'll go over the plate and into the stands,'" Adam F. Goldberg told the AP. "That is a Barry line. Watching him get so nervous, training with friends, sending me videos every day pretending he was a professional pitcher; at the end of the day, he just went out and threw it. Lobbed it in."

To make room on the roster for Straily, RHP Tyler Cloyd was placed on paternity leave.

Marlins: 1B Justin Bour (back spasms) was held out of the starting lineup for the third day in a row but pinch-hit and flied out. ... SS JT Riddle (right shoulder tendinitis) played in a rehab game at Triple-A New Orleans. ... RHP Odrisamer Despaigne (right forearm strain) threw a bullpen session.

RHP Zach Eflin is scheduled to make his season debut for the Phillies against LHP Jarlin Garcia (1-0, 1.00 ERA). Eflin has a career record of 4-10, while Garcia has allowed three runs and 10 hits in 27 innings this season.