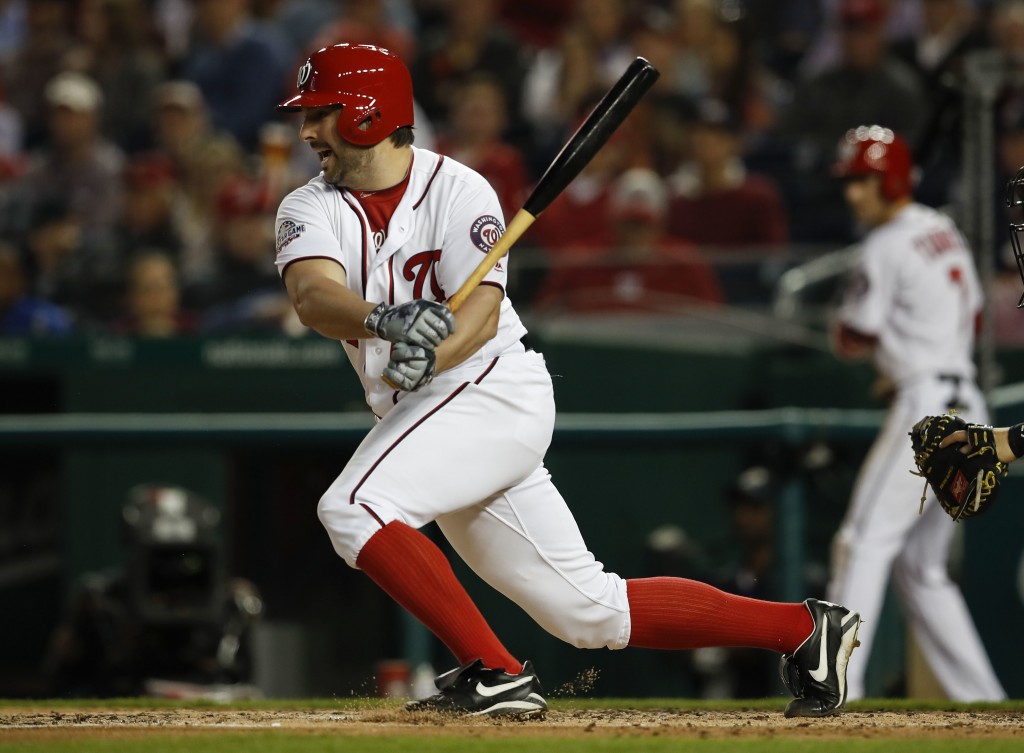 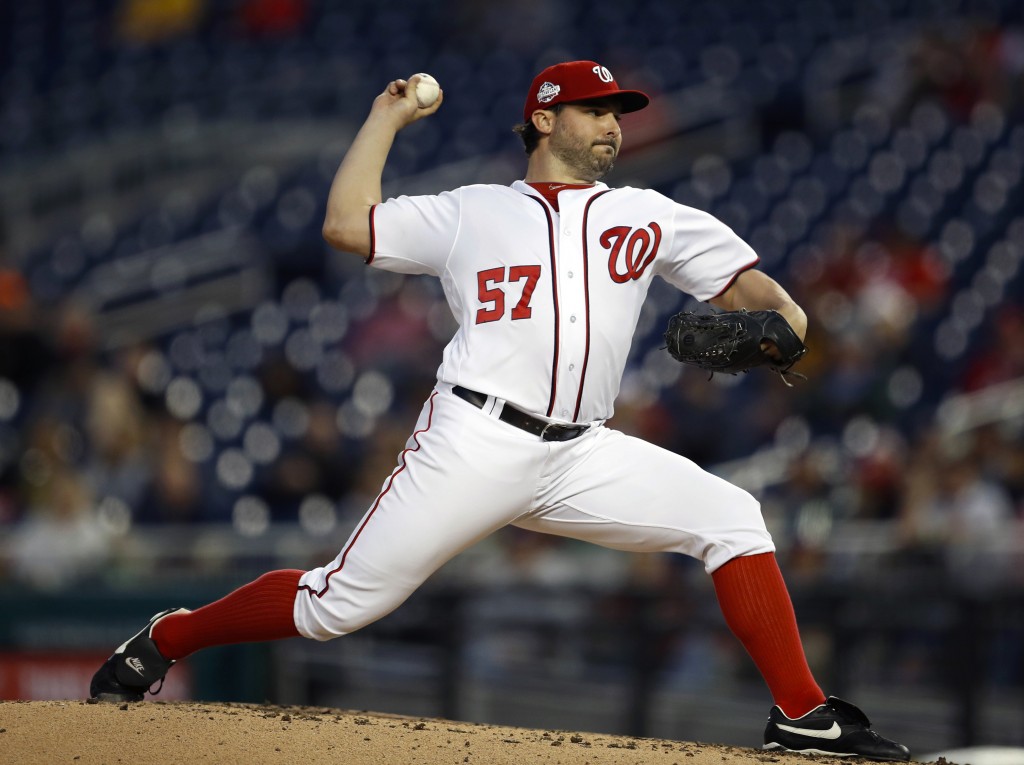 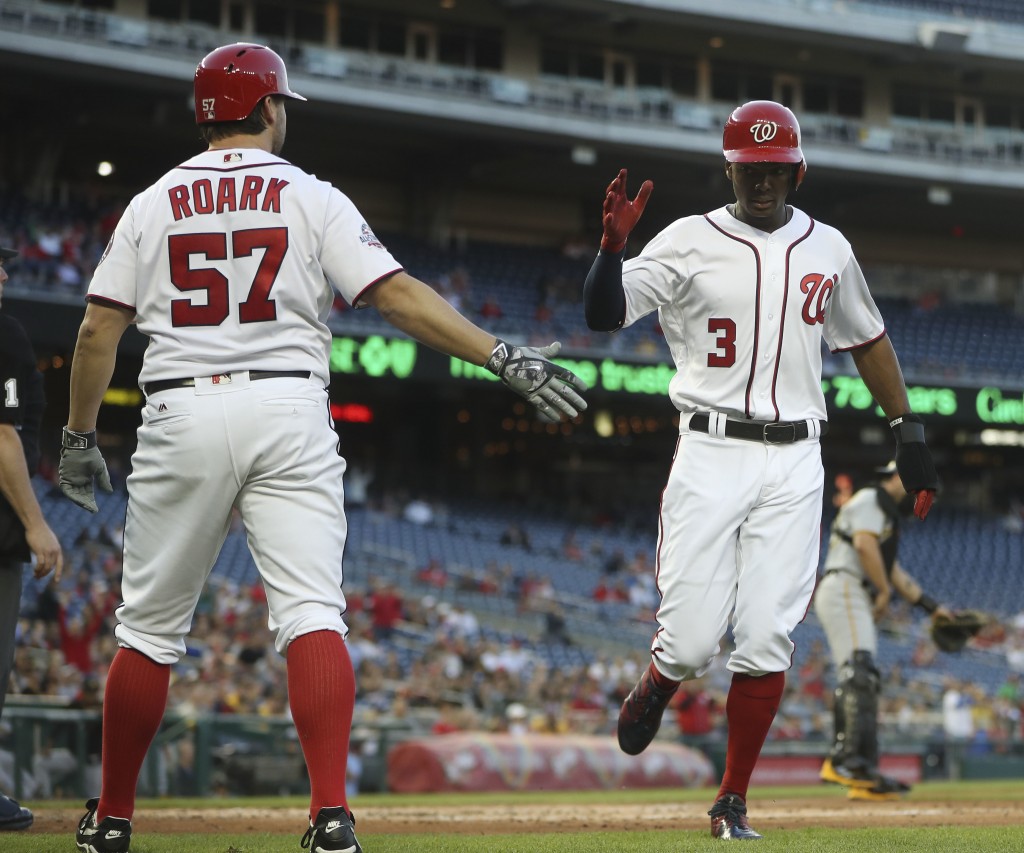 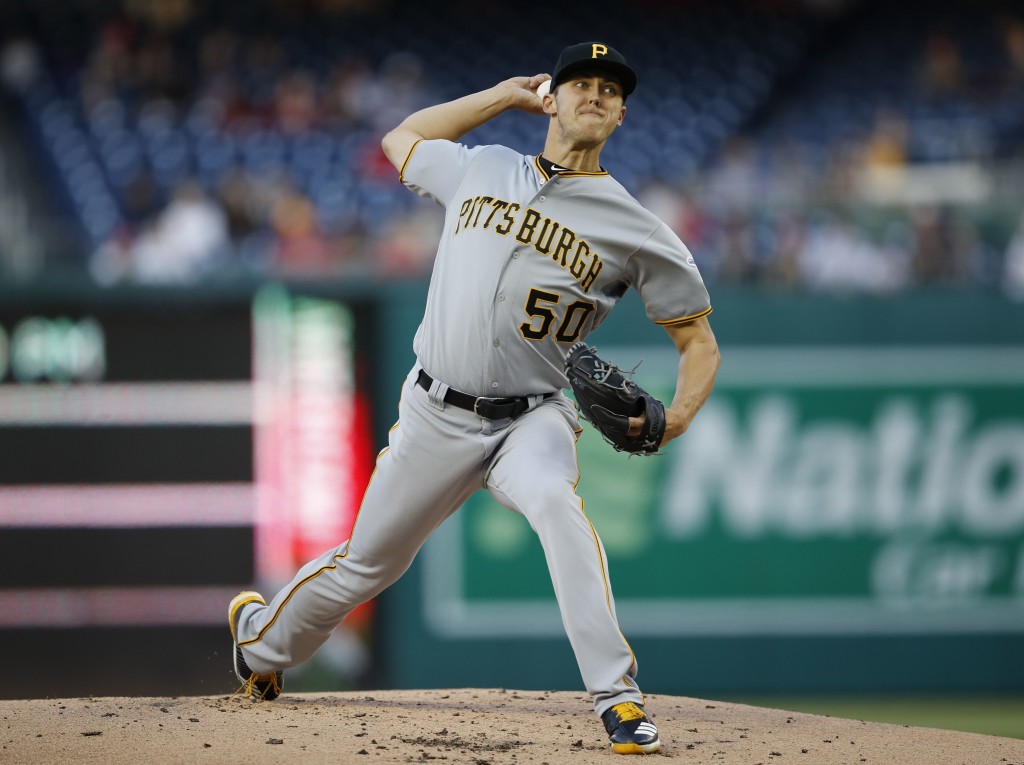 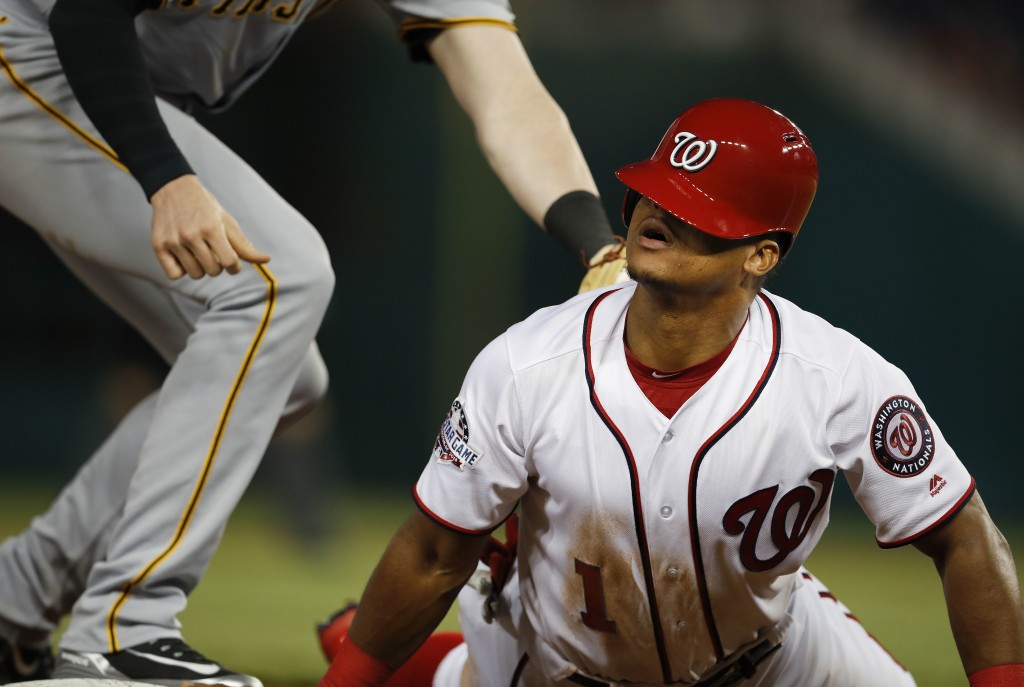 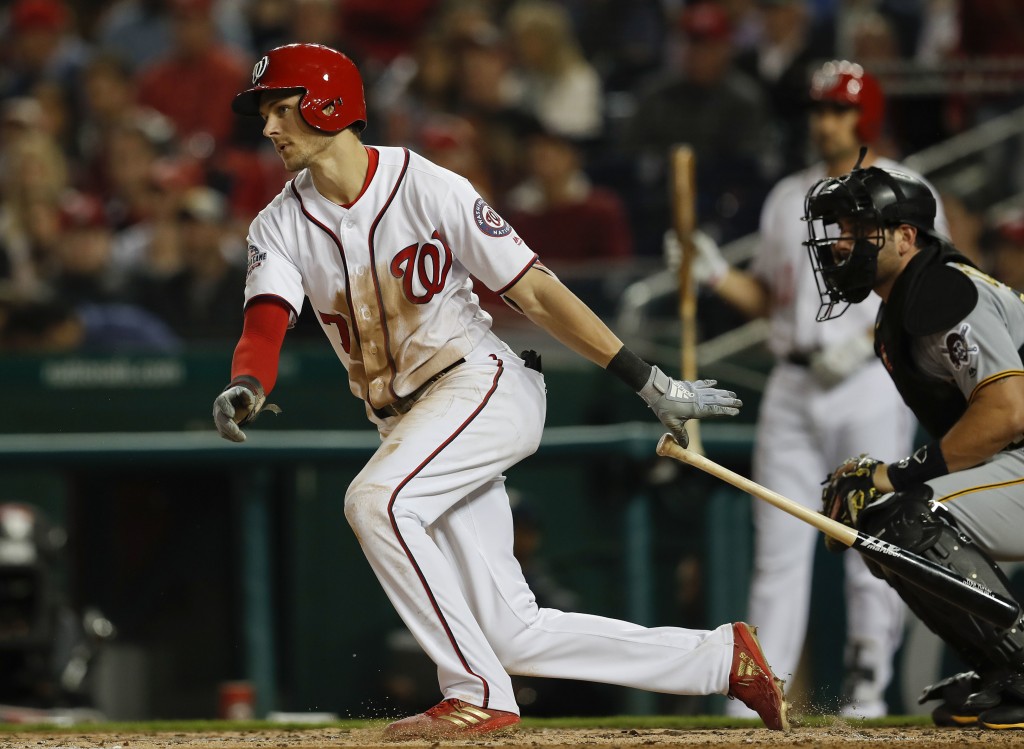 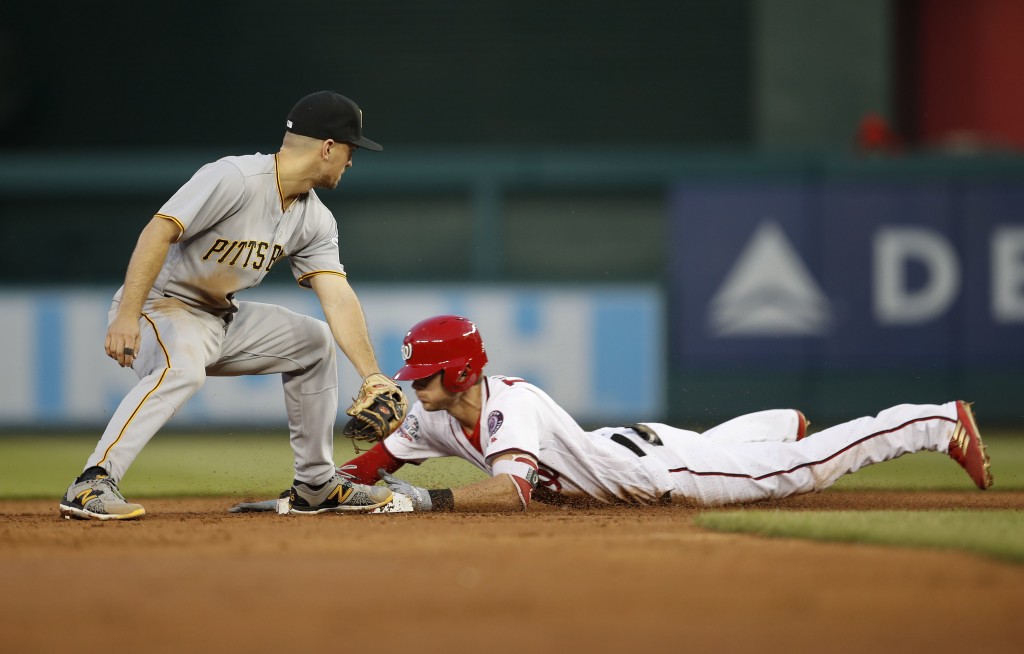 WASHINGTON (AP) — Tanner Roark pitched seven efficient innings and drove in his first run since 2016, and the Washington Nationals beat the Pittsburgh Pirates 3-2 on Monday night.

Roark (2-2) allowed two runs on six hits, struck out four and induced two double-play grounders for his first win since April 2 as the Nationals ended a disappointing April with their second straight victory.

Starting pitcher Jameson Taillon (2-3) drove in the first run for the Pirates with a two-out double to deep left-center in the fifth. He worked six innings, allowing three runs on seven hits, as NL Central-leading Pittsburgh lost for the first time since his previous start. The Pirates had won five straight.

Bryce Harper drew two intentional walks and struck out twice in four plate appearances. The former MVP now has 38 walks and eight intentional passes this season, both tops in the majors, as the injury-depleted Nationals have struggled to protect him in the lineup.

Harper's first intentional walk came in the third after he had worked the count to 2-1 with Trea Turner on second base. Taillon then struck out Howie Kendrick — who went 0-for-4 while batting cleanup for the third time this season — and Matt Adams to end the threat.

Batting in the fourth with runners on first and second, Roark bunted the first pitch foul. Then he pulled the bat back as Taillon threw a wild pitch, allowing the runners to advance. Roark hit the next pitch up the middle to score Matt Wieters and put the Nationals ahead 2-1, his second hit this season and his fifth career RBI. Turner followed with a run-scoring single, one of his three hits on the night.

Corey Dickerson homered to deep left leading off the seventh to pull the Pirates within one. Roark then retired the next three batters, fanning the final two.

Ryan Madson retired the side in the eighth and Brandon Kintzler worked the ninth for his first save in place of regular closer Sean Doolittle, who had pitched in the previous three games.

Wilmer Difo had two hits and drove in Washington's first run with a second-inning single.

Nationals: 2B Daniel Murphy (offseason knee surgery) was back with the team after spending two weeks at extended spring training in West Palm Beach, Florida, and was scheduled to be re-evaluated by team doctors. He has been hitting, running and taking ground balls, Martinez said. There is still no timetable for his return. ... 3B Anthony Rendon (left toe contusion) became eligible to come off the 10-day disabled list on Sunday, and no decision has been made on whether he will have a minor league rehab assignment.

Pirates: CF Starling Marte was out of the starting lineup for the first time this season but popped out as a pinch-hitter in the eighth. ... LHP Enny Romero said he had been trying to pitch through pain in his throwing shoulder before he told team trainers about the injury on Sunday. Pittsburgh had planned to designate him for assignment but instead placed him on the 10-day DL, retroactive to Thursday. "It's a new organization. He didn't want to come in and say he wasn't ready to pitch or that he couldn't pitch," Hurdle said. "After we had that conversation, I guess there's a process you go through where you contact MLB and get the verification that everything's OK, and it's OK now that he's on DL."

The Nationals shook up their bullpen again, recalling right-hander Wander Suero from Triple-A Syracuse and sending right-hander Austin Voth back to Syracuse one day after he was promoted to the big leagues. Voth has been a starter for nearly his entire minor league career, while Suero is a reliever with 30 career minor league saves.

Suero had a chance to make the team out of spring training before he suffered an oblique injury on March 9. He was 0-1 with a 6.75 ERA in four appearances for Syracuse but did not allow a run in his last three outings.

"I like his ability to get both lefty hitters and righty hitters out. He's got a really good cutter and he throws strikes," Martinez said.