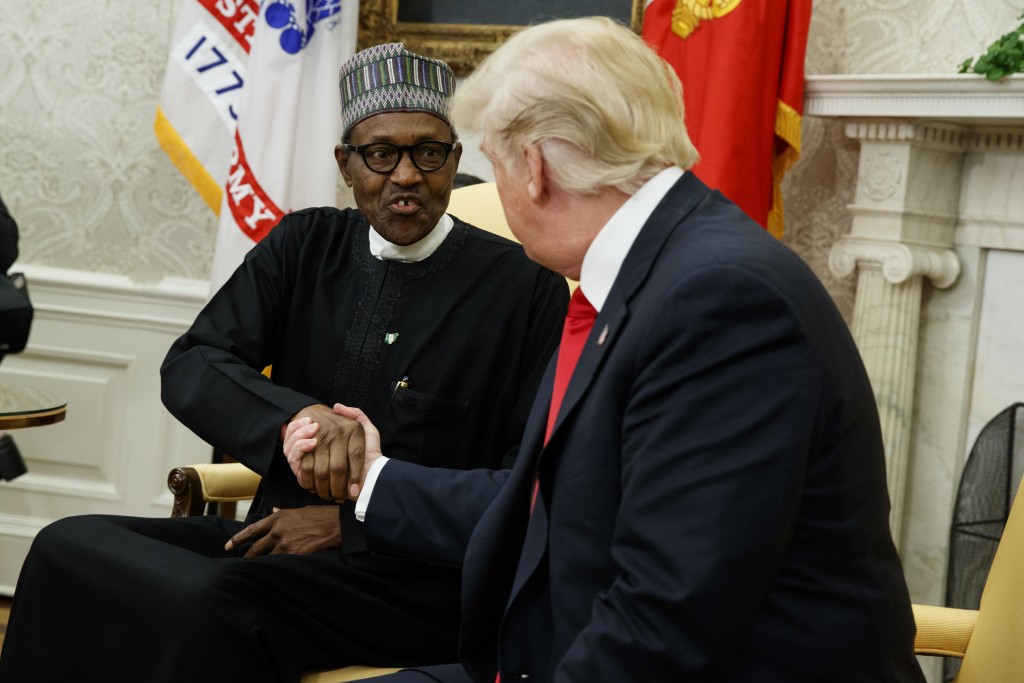 WASHINGTON (AP) — The Latest on the visit of Nigerian President Muhammadu Buhari to Washington (all times local):

President Donald Trump says the extremist group Boko Haram has been a "terrible problem" for Nigeria.

Trump commented Monday as he sat down in the Oval Office with Nigerian President Muhammadu Buhari (moo-HAH'-mah-doo boo-HAH'-ree).

Trump says they will discuss terrorism and trade. He also mentioned anti-Christian sentiment in Nigeria.

Buhari thanked the U.S. for its commitment to fighting terrorism and says U.S. action has helped his country a lot.

Boko Haram launched a violent insurgency in the Nigerian northeast nine years ago with the aim of creating an Islamic state. Thousands of people have been killed. Mass abductions of schoolgirls brought Boko Haram international notoriety and one faction has declared allegiance to the Islamic State group.

Security and economic issues top the agenda for the one-on-one meeting and working lunch Monday. They also plan a joint news conference.

The Nigerian president's visit follows an uncomfortable start to the Trump administration's approach to the world's second most populous continent.

Trump caused anger in Nigeria last year after reports that he said Nigerians wouldn't want to return to their "huts" if allowed to visit the U.S.

Nigeria was also among the African nations that summoned the U.S. ambassador to explain Trump's comments comparing Africa to a filthy toilet.

Buhari was among the first two African leaders Trump called after taking office, along with South Africa's president.