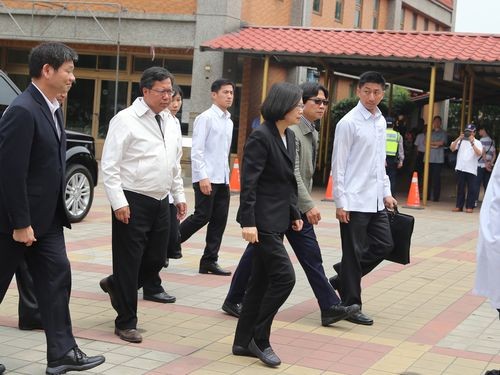 Taipei, April 30 (CNA) President Tsai Ing-wen will have the Ministry of the Interior (MOI) conduct a review of fire safety rules after a massive blaze in an electronics factory in Taoyuan took the lives of five firemen and two migrant workers Saturday night.

Accompanied by Interior Minister Yeh Jiunn-rong and Taoyuan Mayor Cheng Wen-tsan (???), Tsai paid her respects to the victims of the fire and extended condolences to the families at a funeral home in the city.

Tsai later headed to a hospital and visited two other firefighters injured in the fire. Before leaving the hospital, she said the MOI will carry out a review into the accident and make improvements on fire safety rules to make it safer to fight fires.

Cheng said the city's environmental protection department will ask the printed circuit board factory -- Chin Poon Industrial -- to suspend operations and fine it for causing air and water pollution in the wake of the fire.

He said the factory contained many types of chemicals, including highly flammable and explosive materials, making firefighting at the site a big challenge.

The factory also had occupational safety shortcomings which were found during inspections of Chin Poon's facilities last year and in February 2018, Cheng said the city's labor department has fined the factory several times over the past three years for violating the Labor Standards Act and the Occupational Safety and Health Act.

The city's labor department will further investigate whether the fire was caused by violations of the two laws, Cheng said.

According to Ministry of Labor data, Chin Poon has been fined 10 times since last year, including six times for violating the Occupational Safety and Health Act.

The violations have included not adding locks to chemical pipeline valves or failing to install electricity leakage breakers for high pressure cleaning machines.

The factory contained many types of chemicals, including highly flammable and explosive materials, making firefighting at the site a big challenge, according to Cheng.

Kao said in a statement that the investigation will focus on what caused the fire, if human error should be blamed for the tragedy, if firefighters had adequate protective gear and fire kits, and if the direction given to firefighters and rescue procedures were appropriate.

It will also look into compensation for the victims and if the factory hired illegal migrant workers or store dangerous or toxic substances.

National Fire Agency (NFA) Deputy Director Chiang Chi-jen said that among the problems faced by firefighters at the scene was Chin Poon's inability to immediately provide information related to the locations of people trapped in the factory or the factory's layout plans.

Minister Yeh said that his ministry has directed the NFA to make information such as amounts of toxic chemicals and the locations of facilities that house hazardous chemicals available to firefighters and include self-defense concepts into rescue and firefighting training programs.