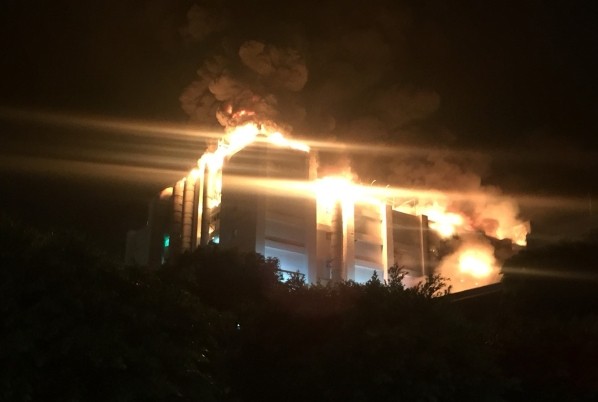 TAIPEI (Taiwan News) -- Including the fire that broke out at a printed circuit board (PCB) in Taoyuan, Taiwan on Saturday, killing seven, there have been 12 other fires reported at Taiwanese-owned PCB plants over the past eight years, reported EBC.

Saturday's deadly fire at a Chin Poon Industrial Co (敬鵬工業) PCB factory in Taoyuan's Pingzhen District which claimed the lives of five firefighters and two Thai migrant workers, is the latest in a long string of blazes that have occurred at Taiwanese PCB plants in recent years.

In the year 2000, a fire also broke out at the same plant in Pingzhen when hot kerosene overflowed from a pressure plate and led nearby diesel fuel to ingnite and cause a small explosion, fortunately, there were no injuries. Because the PCB manufacturing process require the use of many flammable materials and chemicals, including strong oxidizers such as sodium permanganate, fires can easily occur due to improper preservation, processing or pipeline maintenance.

Compeq Manufactureing Co. had a fire on Jan. 8, 2011, but no one was killed or injured. Gold Circuit Electronics Ltd. had a fire in 2002 in Taoyuan's Zhongli District, and another fire at its plant in Changshu China in 2012.

The Unitech Ltd. Plant in New Taipei City's Tucheng had fires in 2015 and 2017. TPT had a fire at its factory in Suzhou, China in 2016, while Tripod Technology Corp. reported two fires in one year.

An expert in the PCB industry said that fires can occur in three phases of the PCB manufacturing process, including: the high-temperature electroplating process, the oven baking process and the release of exhaust.