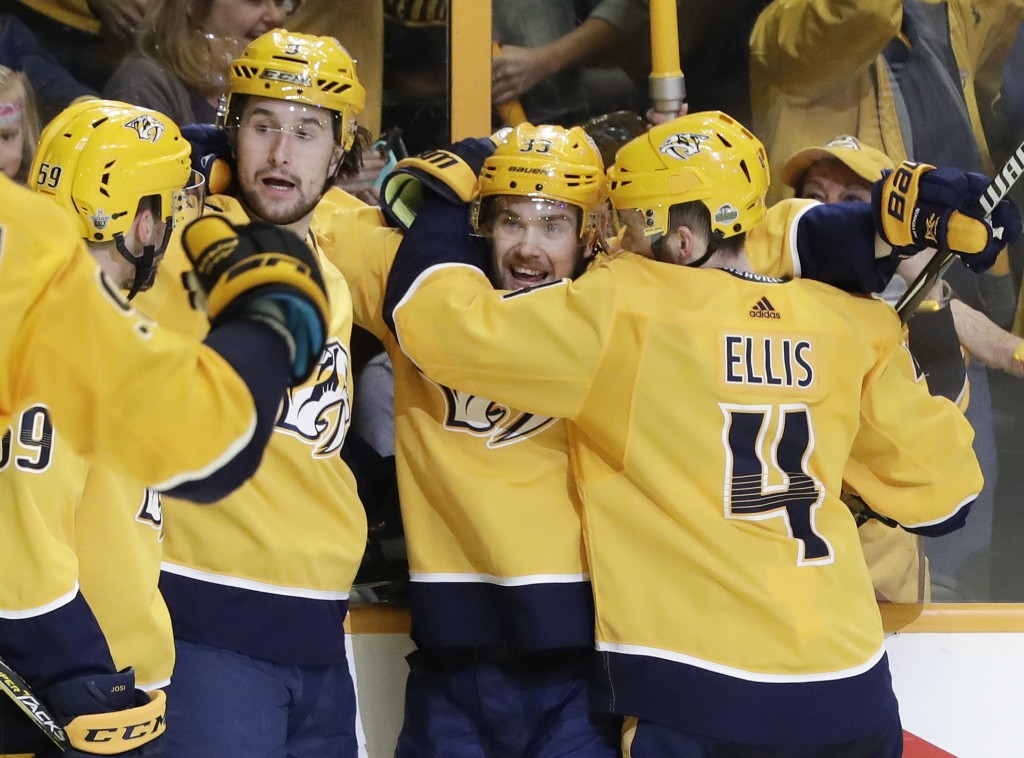 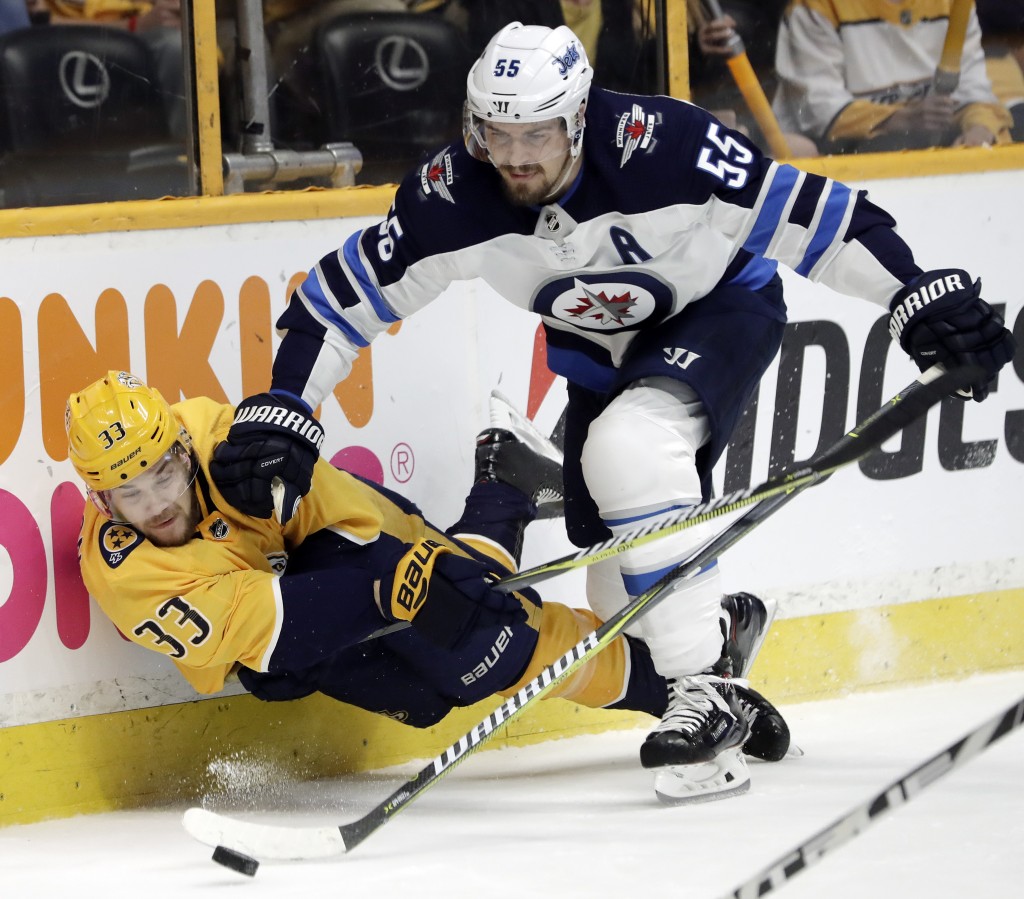 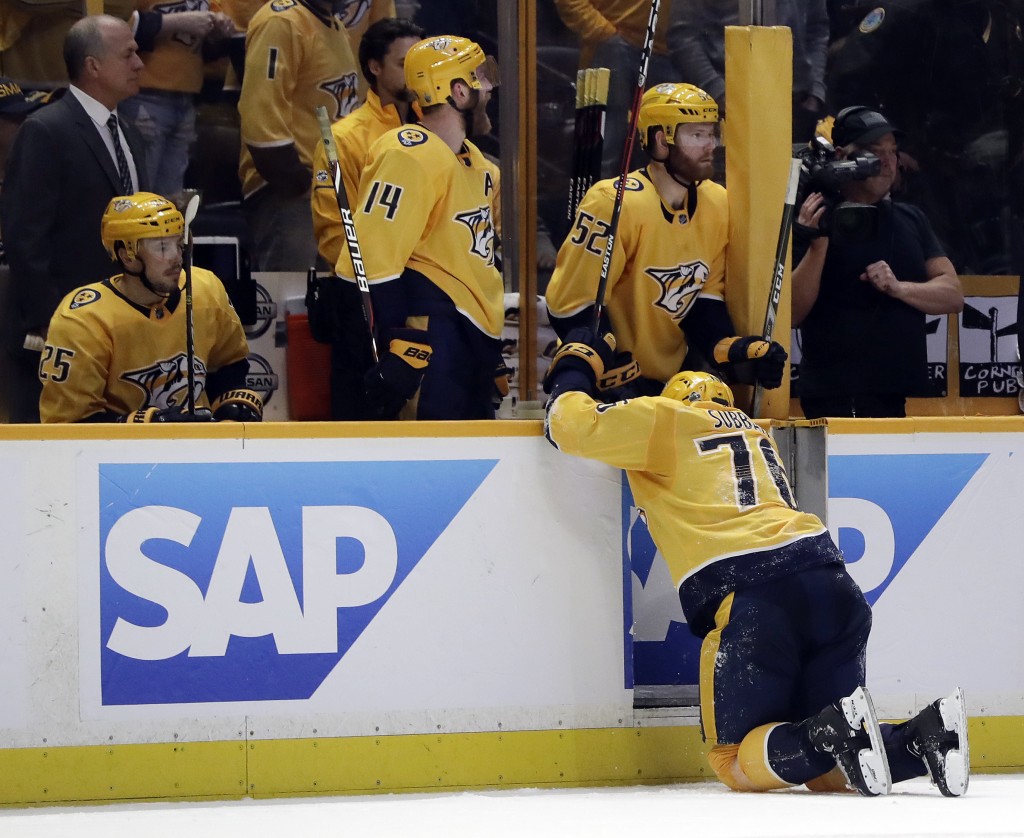 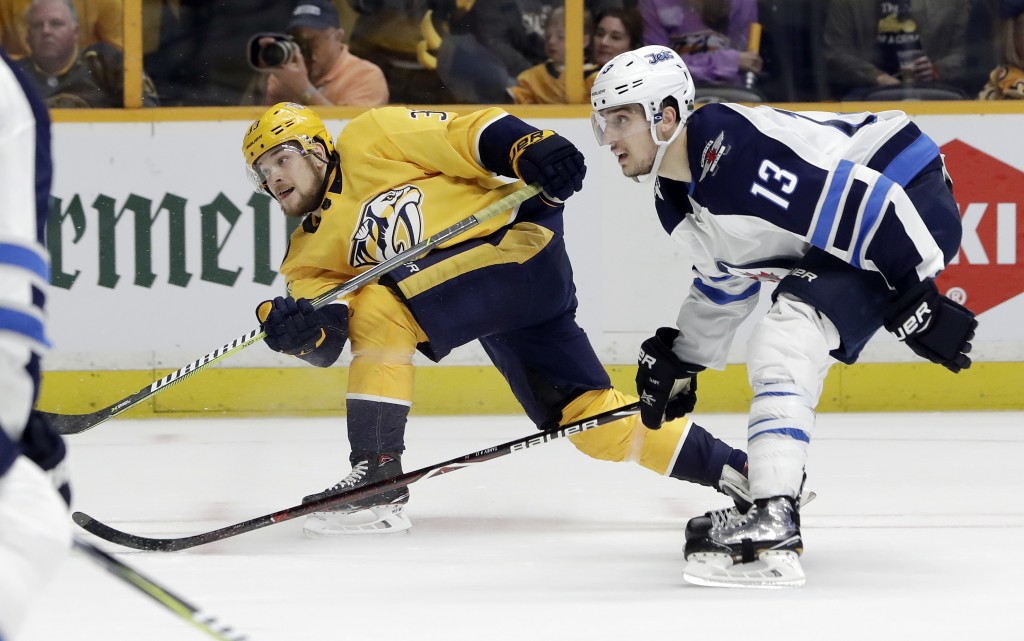 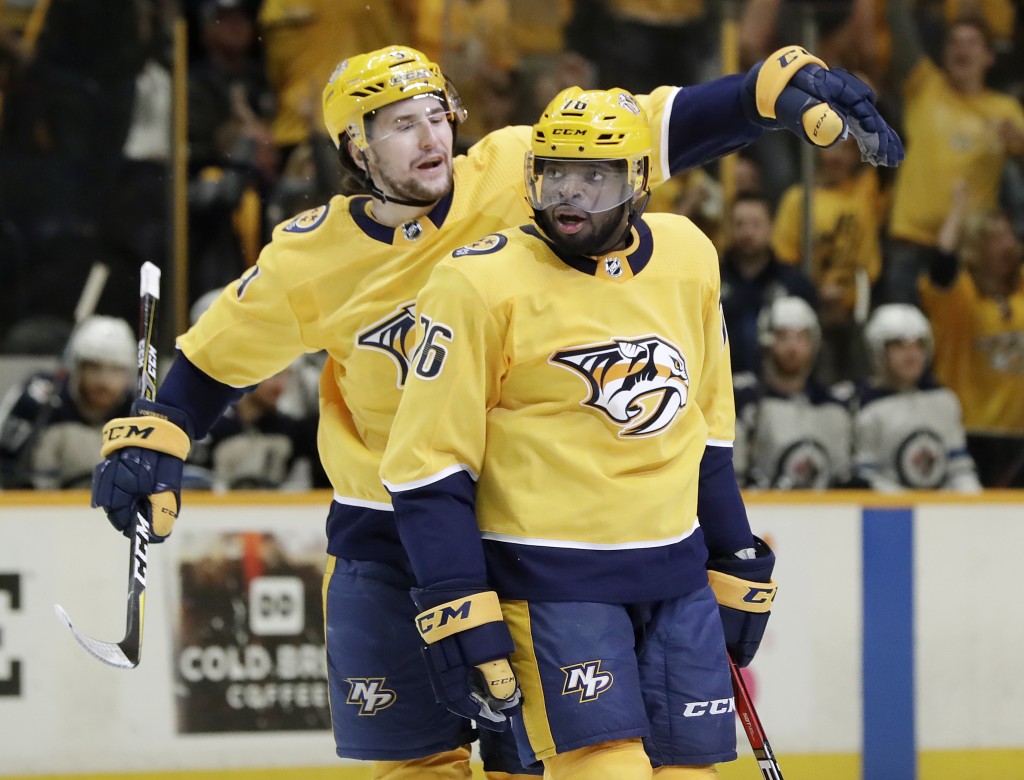 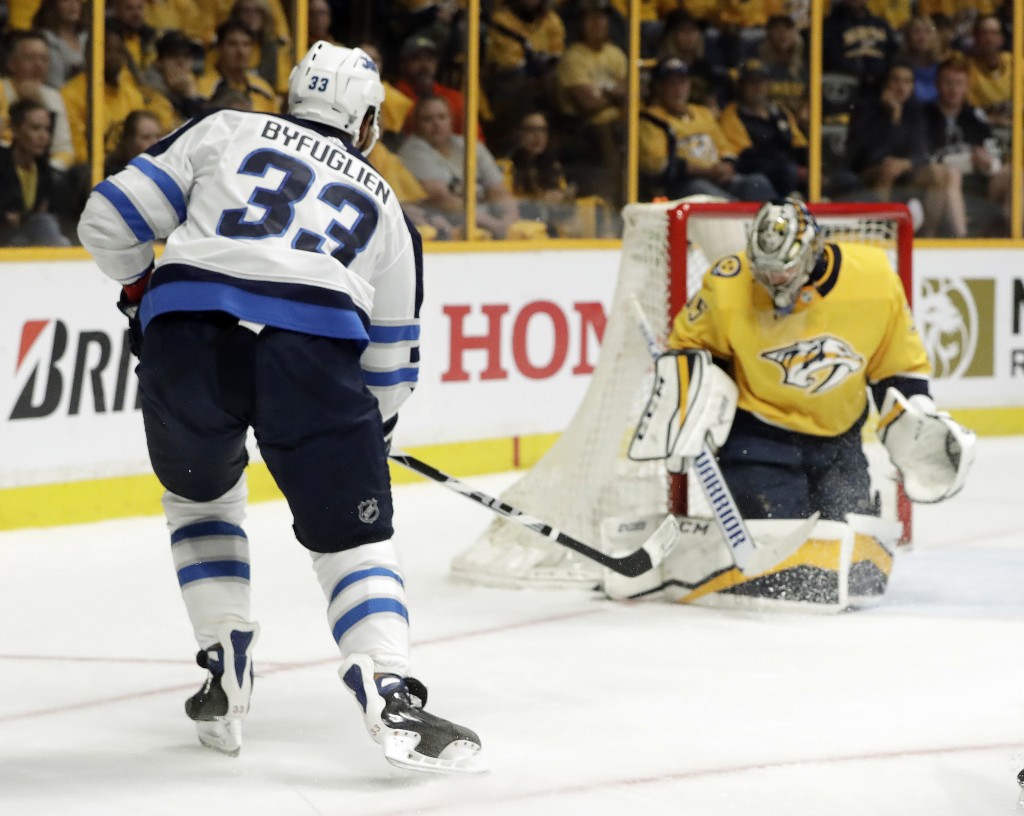 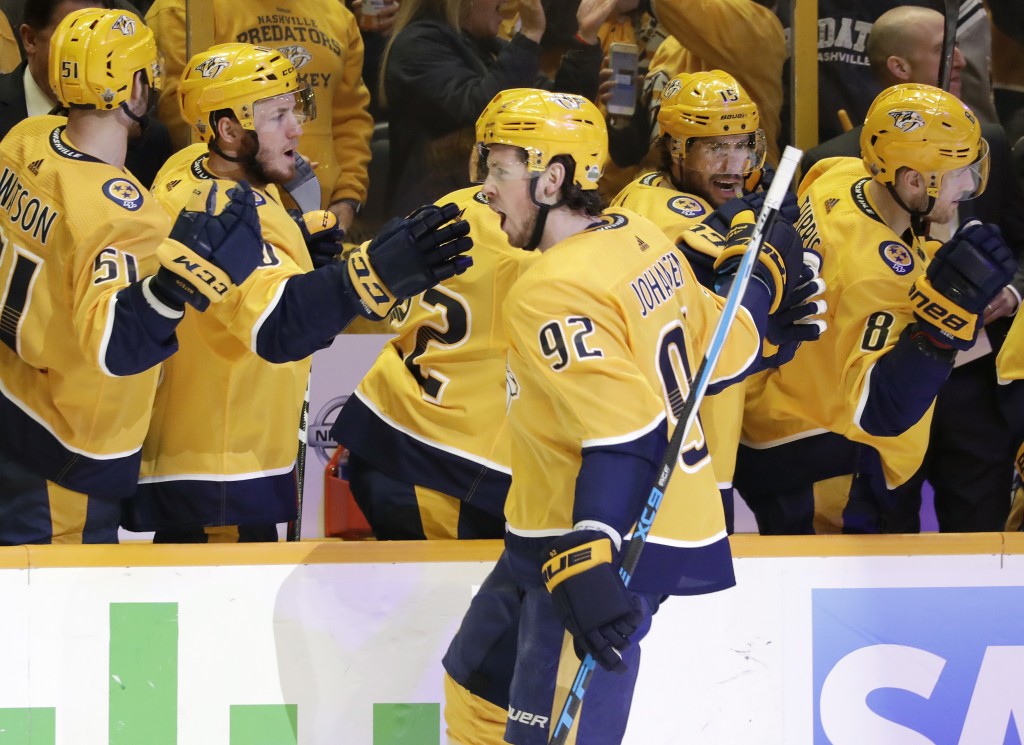 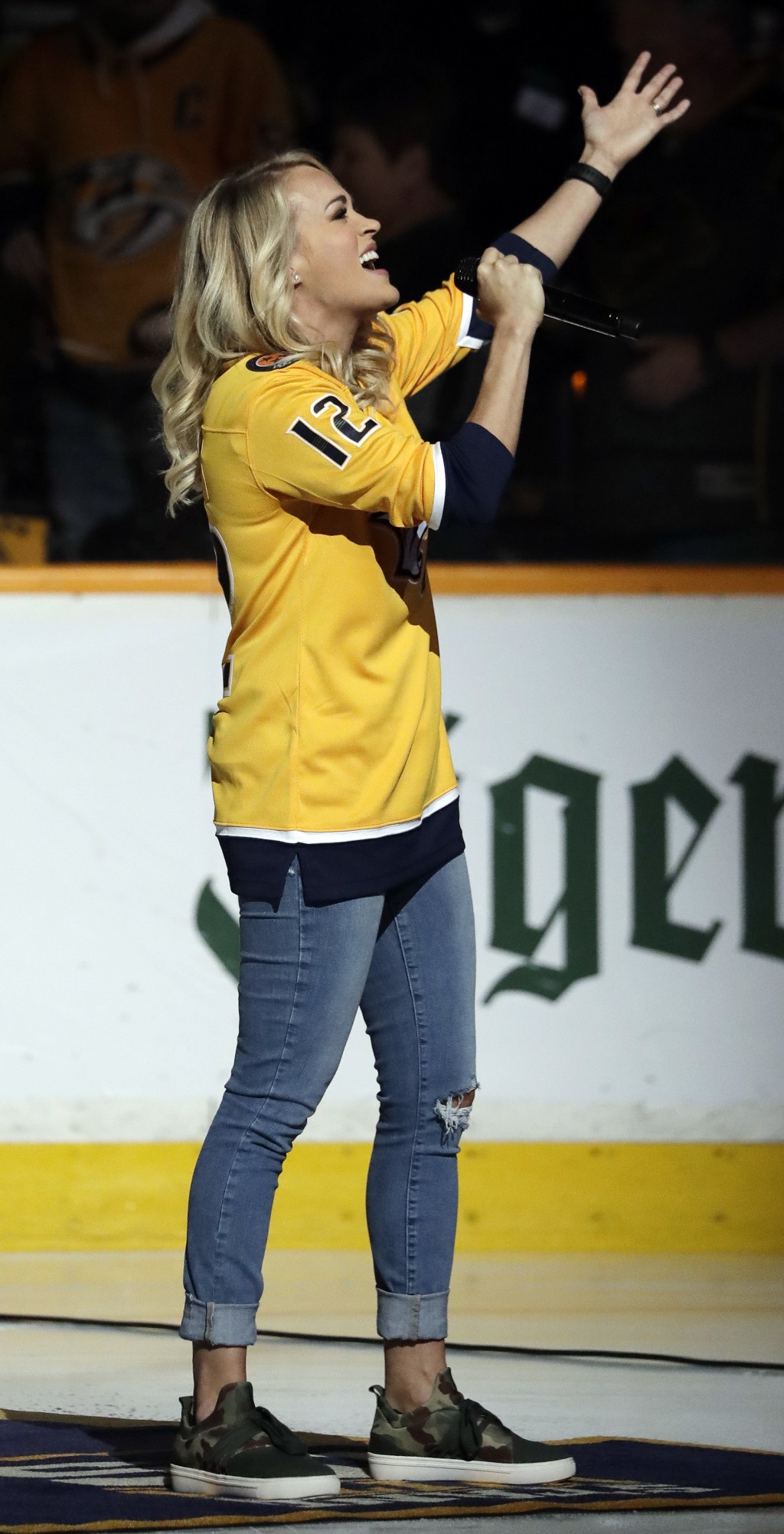 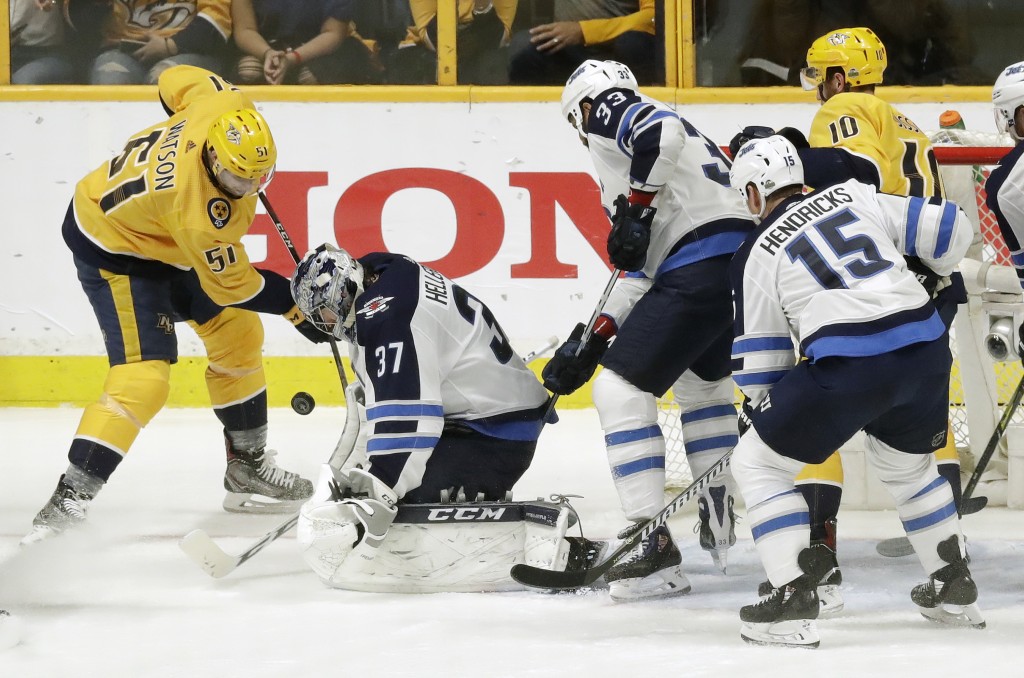 NASHVILLE, Tenn. (AP) — Kevin Fiala scored 5:37 into double overtime, and the Nashville Predators beat the Winnipeg Jets 5-4 on Sunday night in Game 2 to even the Western Conference semifinal series.

The Presidents' Trophy winners had the NHL's best road record during the regular season, but the Predators got the split they needed before this series switches to Winnipeg for Game 3 on Tuesday night. That's where the Jets posted the league's best home record.

Craig Smith and Fiala skated up on a 2-on-1, and Jets defenseman Byflugien failed to block Smith's cross-ice pass to Fiala who beat goalie Connor Hellebuyck with a backhander.

Ryan Johansen scored two goals, Viktor Arvidsson had a goal and two assists, and P.K. Subban had a goal and an assist as Nashville won both its 100th postseason game as a franchise and coach Peter Laviolette's 50th with the team. Filip Forsberg also had three primary assists for the first time in the postseason in his career.

Mark Scheifele scored two goals and had an assist. Byflugien had a goal and an assist, and Brandon Tanev had a goal for Winnipeg.

But Scheifele forced overtime with his fourth goal in this series and eighth this postseason with 1:05 left in regulation and Hellebuyck pulled for the extra attacker.

The Predators brought star Carrie Underwood in for the U.S. anthem as a "proud hockey wife" of Nashville center Mike Fisher, and Marcus Mariota brought the NFL's Tennessee Titans offensive linemen to wave the rally towels. Pro Bowl left tackle Taylor Lewan held up a huge catfish before they chugged beers — Lewan using the catfish as a funnel.

After throwing up a postseason-high 48 shots in losing Game 1 on Friday night, the Predators wasted no time getting on the board this time. Johansen scored 27 seconds in on Nashville's first shot and a 1-0 lead, snapping Winnipeg's streak of 10 straight games scoring the first goal with the Jets going 9-1-0 in that stretch dating back to the regular season.

The Jets made up for that by scoring twice 29 seconds apart to grab the lead. Byflugien scored between Rinne's pads on a 4-on-4 at 12:47, and Scheifele made it 2-1 with a power-play goal at 13:16 of the period.

Subban tied it with a slap shot for Nashville's first power-play goal of the series and the Norris Trophy finalist's first goal this postseason at 5:04 of the second. That brought the sold-out crowd to life again, and Rinne settled down as well. A couple minutes later, he made a big pad save on a shot by Kyle Connor and then gloved a shot from Byflugien.

The Jets thought they took the lead with 6:14 left in the second period only to have the apparent goal by Andrew Copp immediately waved off. Rinne made the stop on Byflugien off a breakaway with Copp scoring off the rebound. But Matt Hendricks was called for interference for knocking down Nashville defenseman Matt Irwin, negating the goal.

Arvidsson gave Nashville a 3-2 lead with a slap shot from the right circle at 18:41 of the second.

NOTES: The Preds now are 3-3 in multiple OT games in franchise history. ... Johansen's goal was the fastest goal at home in the postseason for Nashville and second fastest overall. ... This was Forsberg's second three-point game in the playoffs for his career and third multi-point game this postseason. ... Scheifele now has points in four straight games, the first with multiple points in four or more consecutive playoff games since Paul Martin in the first four games of the 2014 first-round with Pittsburgh.