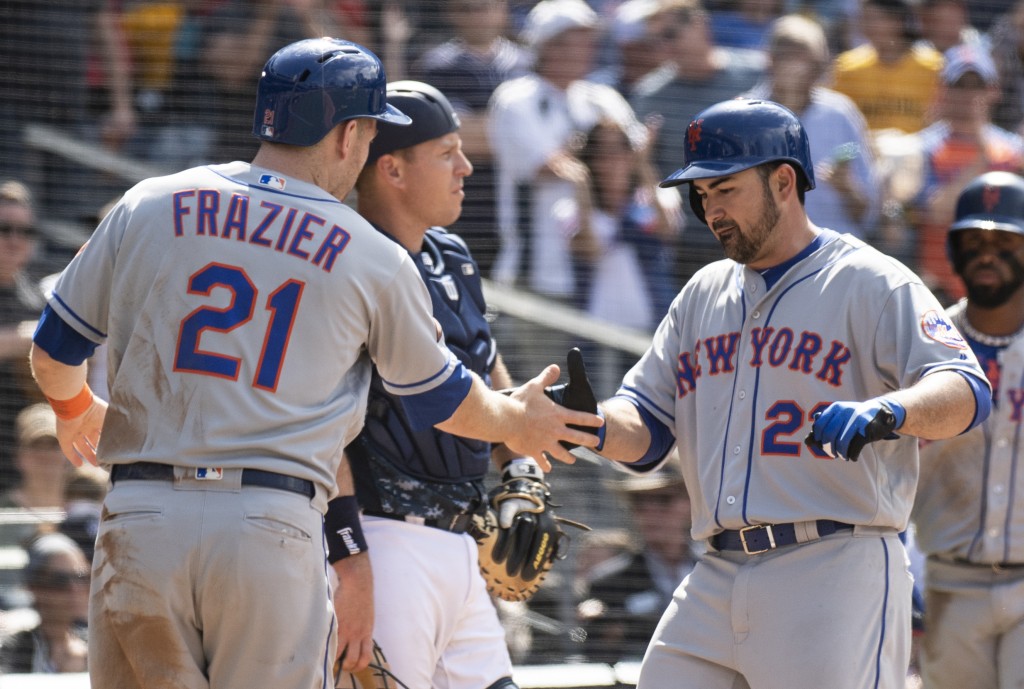 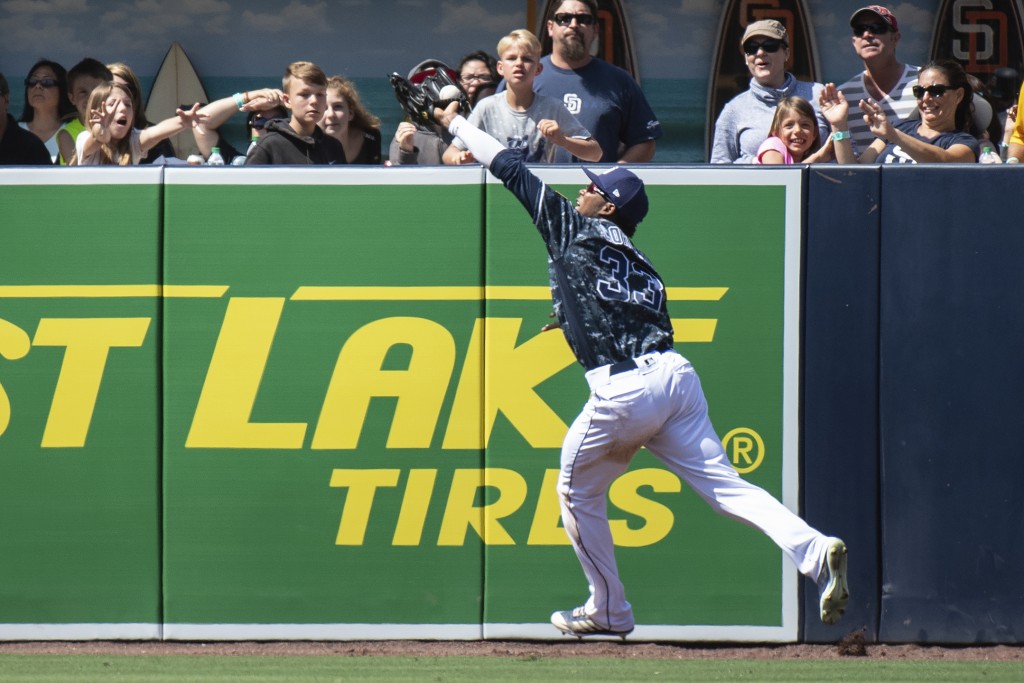 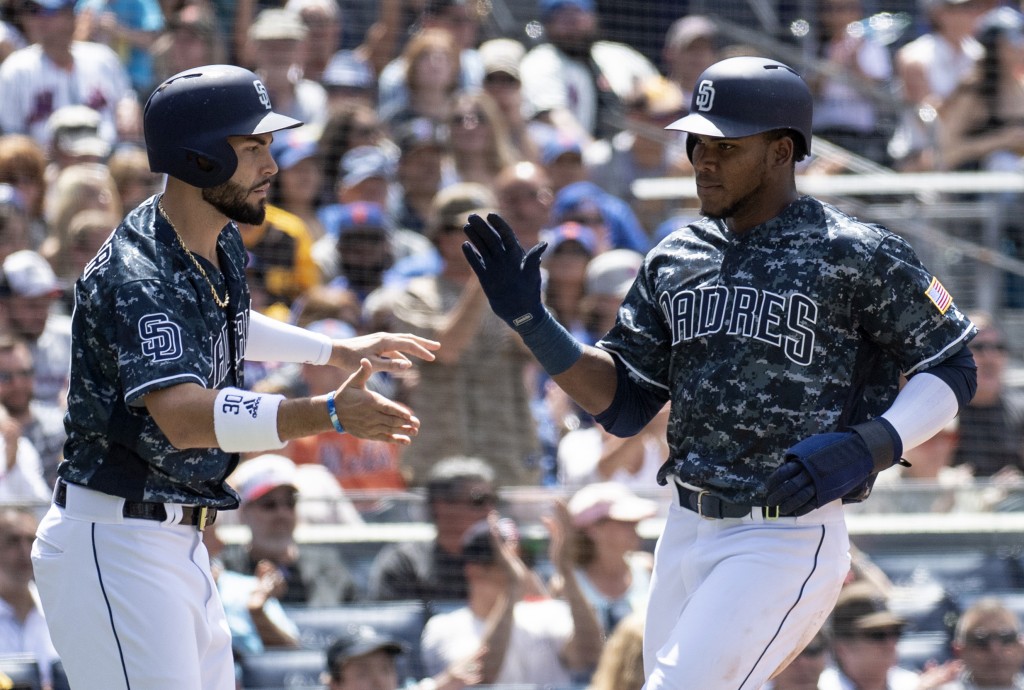 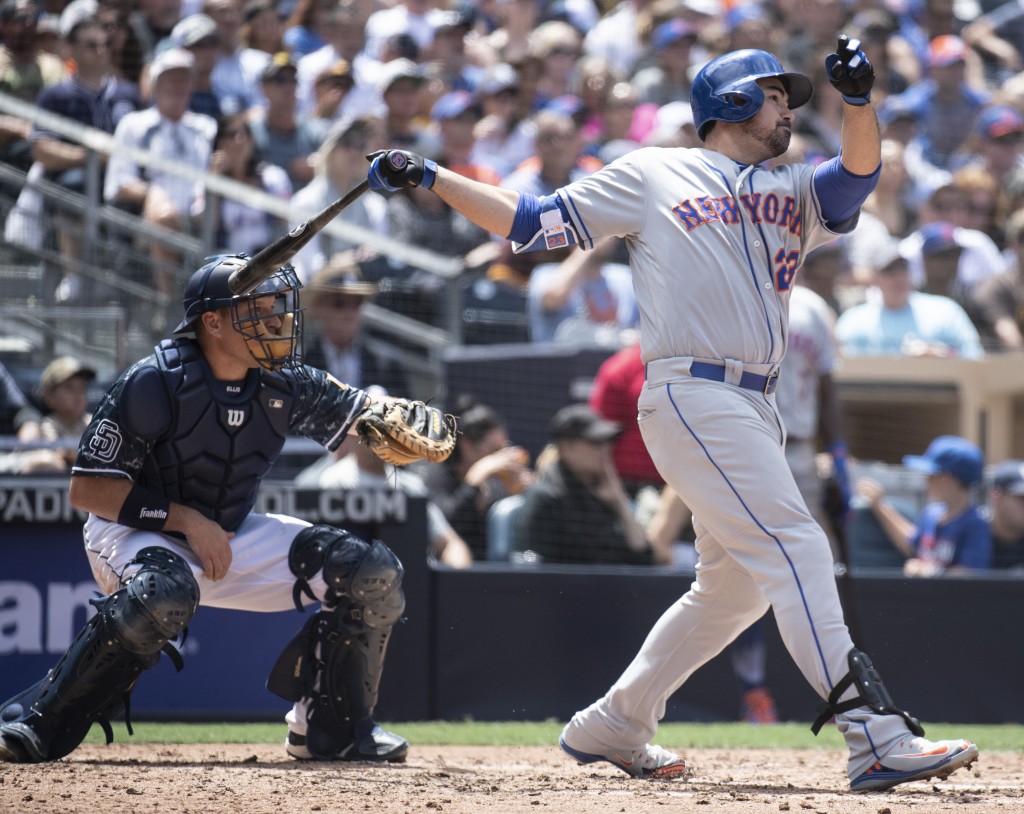 SAN DIEGO (AP) — Adrian Gonzalez homered, doubled and drove in five runs against his former team, and Zack Wheeler struck out nine in five innings for the New York Mets, who overwhelmed the San Diego Padres 14-2 on Sunday.

The 14 runs and 19 hits were season highs for the Mets, who took two of three in San Diego. The Mets batted around in both the seventh and eighth innings, scoring five runs each time.

Gonzalez hit a three-run homer to left off Jordan Lyles with one out in the seventh, his third. He hit a two-run double off starter Bryan Mitchell in the third. He singled in the ninth, leaving him a triple shy of the cycle. Eight other Mets players had two hits apiece.

The 35-year-old Gonzalez played for his hometown Padres from 2006 until being traded to Boston on Dec. 6, 2010. He was traded to the Los Angeles Dodgers on Aug. 25, 2012, and then sent to Atlanta on Dec. 16. He was released by the Braves after just two days and signed with the Mets a month later. He was the first pick overall in the 2000 draft, going from Eastlake High in Chula Vista to the Marlins.

With the Padres starting left-handers the first two games of this series, Gonzalez didn't play Friday night and pinch-hit Saturday night, when he was loudly booed.

Any boos by Padres fans Sunday were drowned out by cheers from Mets fans.

Gonzalez hit a fly ball to deep right-center with two on and two outs in the fifth, but right fielder Franchy Cordero raced over and made a running catch at the wall in right-center.

Todd Frazier hit a two-run homer in the eighth, his fourth, and Jose Reyes hit an impressive solo shot, his first.

Wheeler (2-1) allowed two runs and six hits in five innings and walked two. The righty helped the Mets bounce back from a 12-2 loss Saturday night by keeping young Padres sluggers Franchy Cordero and Christian Villanueva in the yard. Cordero hit a three-run, 453-foot home run on Saturday and Villanueva hit a two-run shot.

Bryan Mitchell (0-3) failed again to get his first win with the Padres. He was obtained along with Chase Headley from the New York Yankees in an offseason trade that is becoming increasingly unpopular with Padres fans. The Padres liked Mitchell so much that they were willing to take on Headley's $13 million contract. But both players have underperformed.

Freddy Galvis hit a two-run single off Wheeler in the third. In the first, Galvis came up with the bases loaded and two outs, and struck out.

Mets: Yoenis Cespedes left with a sore left thumb, apparently suffered while sliding into third as part of a double steal one batter before Gonzalez's two-run double. Cespedes was checked out and stayed in the game, but was later replaced by Brandon Nimmo.

Padres: Placed OF Wil Myers on the 10-day disabled list with a strained left oblique.

Padres: Rookie LHP Eric Lauer (0-1, 18.00) is scheduled to make his second start Monday night in the opener of a three-game series at San Francisco. He lasted only three innings in his MLB debut at Colorado on Tuesday.