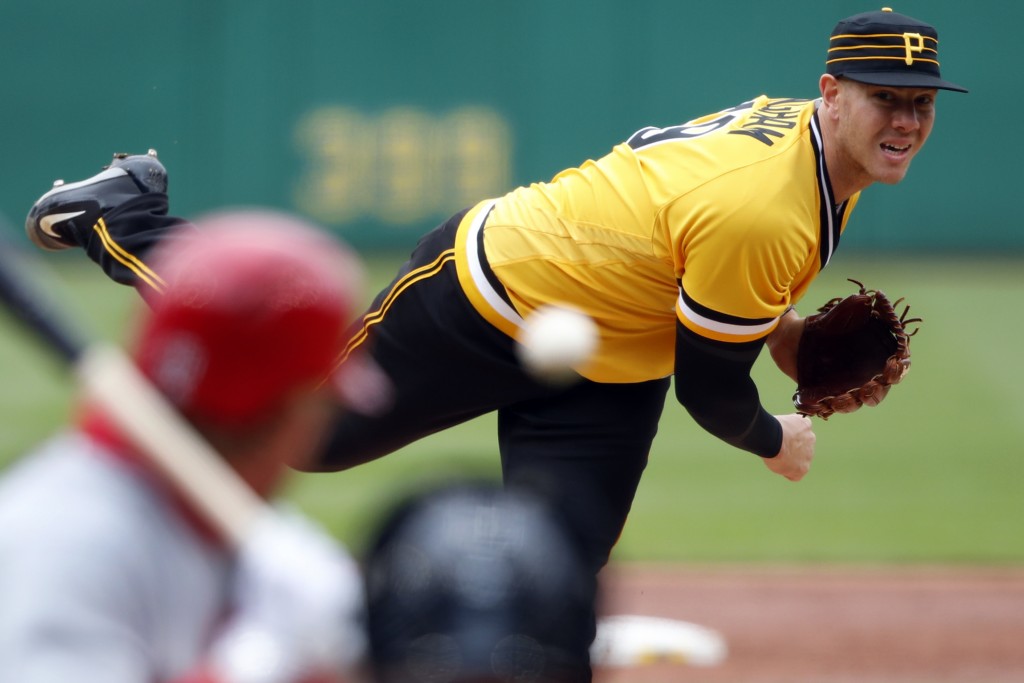 PITTSBURGH (AP) — Nick Kingham carried a perfect game into the seventh inning in his major league debut to lead the Pittsburgh Pirates to their fifth straight win, 5-0 over the St. Louis Cardinals on Sunday.

Kingham, a 26-year-old rookie right-hander, retired 20 straight before Paul DeJong singled down the left-field line with two outs in the seventh. He finished with one hit and nine strikeouts on 98 pitches (72 strikes) after being recalled from Triple-A Indianapolis earlier in the day.

He joined Johnny Cueto as the only pitchers in the last 100 years with one hit allowed, at least nine strikeouts and zero walks in a debut.

J.D. Martinez had four singles and drove in two runs for the Red Sox, but misplayed a fly ball into a double that put runners on second and third in the eighth before Craig Kimbrel (1-1) struck out Brad Miller to end the inning.

Denard Span hit a two-run homer and made a leaping catch in front of the Green Monster for the Rays, who had their third-longest winning streak in team history halted. Tampa Bay won nine straight in 2014 and 12 in '04.

Red Sox starter Rick Porcello gave up three runs and seven hits with six strikeouts and no walks over 7 2/3 innings.

CHICAGO (AP) — Tyler Chatwood pitched seven sparkling innings and helped himself with an RBI single, leading the Cubs to a sweep of the four-game series between NL Central rivals.

Chatwood (2-3) allowed two hits, struck out four and walked three in his second straight win. Carl Edwards Jr. worked the eighth and Brandon Morrow got three outs for his seventh save in seven chances, finishing Chicago's second straight shutout and its fifth just this month against Milwaukee.

Zach Davies (2-3) kept Milwaukee in the game for most of the day, but Chicago got to the right-hander for a run in the fifth and sixth.

Kevin Gausman (2-2) allowed one run and five hits over 5 2/3 innings for the Orioles, who took two of three from Detroit following a five-game skid.

Mancini hit his first career leadoff homer on the third pitch from Daniel Norris (0-2) and Alvarez connected with a man on in the second inning for a 3-0 lead.

After the Tigers closed to 4-3, Alvarez hit a pitch from Joe Jimenez over the right-field scoreboard in the eighth. Alvarez was inserted into the lineup at third base just before the game after Danny Valencia was scratched.

Teoscar Hernandez and Yangervis Solarte added solo homers off Martin Perez (2-3) as the Blue Jays snapped a four-game home losing streak and won for the third time in their past 10.

Blue Jays outfielder Randal Grichuk made the defensive play of the game, an inning-ending double play in the first. A diving Grichuk managed to cradle Isiah Kiner-Falefa's sinking liner between his forearm and his chest, then threw to second base to double off Delino DeShields.

Healy had an RBI double in the second inning, hit a solo homer in the sixth and added a two-run shot in the eighth. Cano hit a two-run homer during Seattle's five-run second. Haniger's solo shot in the ninth was his 10th, tied for the major league lead.

Cano's drive to right off Josh Tomlin (0-4), his third homer this year, finished off the big inning for the Mariners, who had four straight two-out RBI hits. Marco Gonzales (3-2) allowed two runs in six innings before four relievers finished up.

MIAMI (AP) — Caleb Smith allowed two hits in seven innings for his first career victory, and the Marlins took the rubber game of their low-scoring series against Colorado.

Smith (1-3), who entered the game with an ERA of 5.82, struck out nine and walked one in the longest outing of his career. The breakthrough victory came in his 15th career appearance, including eight starts. Drew Steckenrider struck out the side in the eighth, and Brad Ziegler pitched the ninth for his third save.

The Marlins outscored Colorado 7-2 in the series, including Miami's 1-0 loss Friday. The Rockies had 15 hits in the series.

PHILADELPHIA (AP) — Ronald Acuna Jr. doubled twice and reached base four times to cap a successful first week in the majors, and the Atlanta Braves cruised with a new lineup to a victory over the Phillies.

Acuna, at 20 the youngest player in the big leagues, hit second behind 21-year-old Ozzie Albies, the second-youngest major leaguer. Albies drilled the game's first pitch for a homer, added a two-run double and scored three runs. Acuna had an RBI double in the eighth, walked twice and stole his first base.

Johan Camargo hit a three-run homer and Ender Inciarte, dropped from first to ninth in the order, tripled in a five-run third inning off Vince Velasquez (1-4) in the Braves' fourth win in five games. Brandon McCarthy (4-0) allowed one run and five hits while striking out six in 5 1/3 innings for his third win over Philadelphia this season.

The Diamondbacks lost starter Robbie Ray to a strained oblique muscle in the second inning. He was replaced by T.J. McFarland, who surrendered a home run to Wieters to give the Nationals a 1-0 lead. McFarland (1-1) then loaded the bases and bobbled a grounder to allow another run to score. Taylor homered off McFarland with one out in the third.

Arizona didn't score off Gonzalez (3-2) until the seventh inning, when it put the first two men on base and pushed a run across on Daniel Descalso's one-out sacrifice fly. Sean Doolittle pitched the ninth for his fifth save.

HOUSTON (AP) — Gerrit Cole struck out 12 while working into the seventh inning, George Springer and Jose Altuve each drove in two runs and the Astros beat the Oakland Athletics.

After Cole allowed the tying run on his 99th and final pitch, the Astros took advantage of two errors in the bottom of the seventh — among Oakland's four on the afternoon — to pull away. Cole gave up three runs and six hits and walked none in 6 2/3 innings. Will Harris (1-1) recorded the final out in the seventh to pick up the win.

MINNEAPOLIS (AP) — Tyler Mahle pitched into the seventh inning in another impressive start, Jose Peraza had three hits and Adam Duvall homered, leading the Cincinnati Reds past the Twins.

Mahle (2-3) cruised through the Twins' lineup in his second straight solid outing. After striking out 11 against Atlanta in his most recent start, Mahle gave up one run in 6 1/3 innings, allowing four hits and two walks while striking out seven.

Twins starter Jose Berrios (2-3) struggled with his command and the Reds made him pay. The 23-year-old right-hander walked three and allowed five hits in three innings, his shortest start of the season. He also didn't strike out a batter for the first time in 15 starts.

Whit Merrifield singled home Alcides Escobar, who was hit by a pitch to lead off the eighth inning, with the go-ahead run off Bruce Rondon (1-1). Escobar left in the ninth with a left hand contusion.

Cuthbert, who had not homered since August 20 — a span on 109 at-bats — drove Hector Santiago's pitch into the White Sox bullpen in the fourth. He homered in the fifth with Salvador Perez and Jorge Soler aboard off Chris Volstad.

Brandon McCarthy (2-0) picked up the victory, while Blaine Boyer logged his fifth career save — and his first since May 29, 2016, while with Milwaukee.