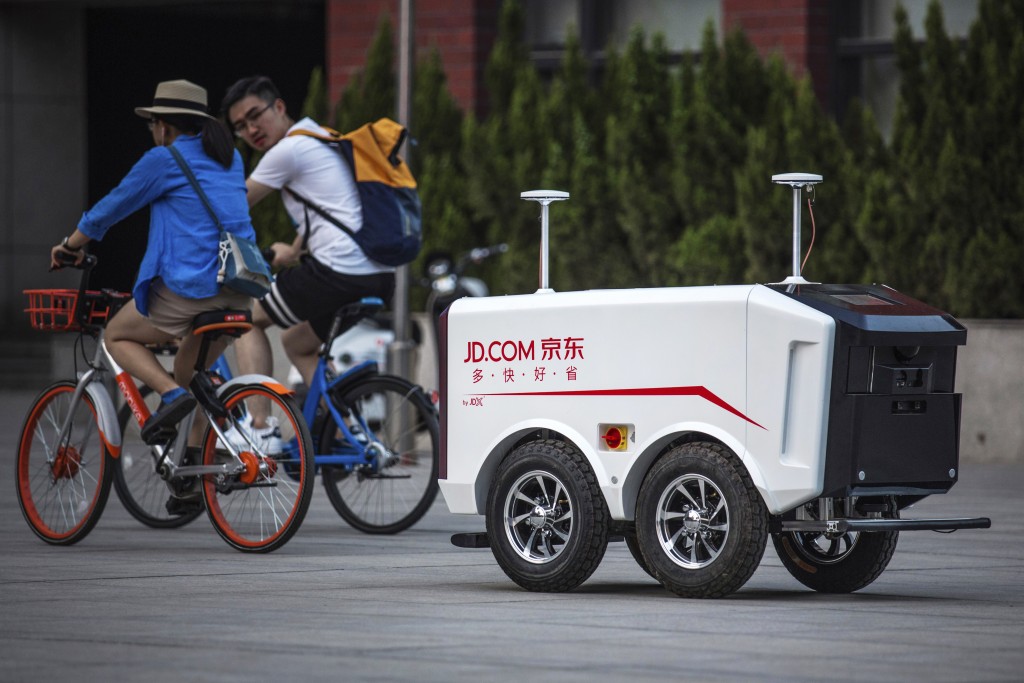 NEW YORK (AP) — Self-driving delivery vehicles that are polite to pedestrians? Faster and more precise robotic arms? JD.com, the largest challenger to Alibaba's e-commerce empire in China, is investing in technology to speed up warehouse operations and delivery to shoppers who want service quickly.

In China, it's testing drone delivery, has opened an automated warehouse that's improved on manual sorting, and it's testing deliveries using unmanned vehicles at universities in Beijing. It also uses these self-driving vehicles that look like rolling ice cream carts to move goods inside its warehouses.

Though it does not sell in the United States, the Beijing-based online retailer is also leaning on its 2-year-old research and development lab in Silicon Valley to recruit top talent and get access to tech startups. The goal: Bring that expertise back to China.

Dr. Hui Cheng, the head of robotics research at JD.'s Silicon Valley Research Center, recently spoke with The Associated Press about the priorities of the lab, the "spoiled" Chinese consumer and the prospect of talking robots. Under Cheng, who previously worked on Amazon Go's cashier-less store project, JD is working on areas like artificial intelligence.

Cheng says the center's main goal is to serve people in China and Southeast Asia. He says he's not planning to use the center as a foothold to launch in the U.S. and directly challenge Amazon.

The following interview was edited for length and clarity.

Q. How is the Chinese consumer different from the American consumer?

A. (Chinese consumers) are a bit spoiled. It's all about free service. Also, they're expecting high-quality products. We can directly deliver to people's doors, a bit different from the U.S. where they just drop it off. Our delivery employees are in charge of certain geographical areas and are very familiar with the customers in those areas. They know when they'll be home. They call when they get there. They're very accommodating.

Q. What are your main priorities at the Silicon Valley center?

Q. What about the autonomous cars?

Q. Will they be able to talk?

A. We are developing a lot of natural-dialogue capabilities so they will know how to speak in the future.

A. Our vehicles operate on sidewalks at about five or six miles per hour and they're much smaller than passenger cars. They're extremely safe.

Q. Are you testing drone work in Silicon Valley?

A. There's some cutting-edge technology (in Silicon Valley), but we are not actively testing or developing software in drones.