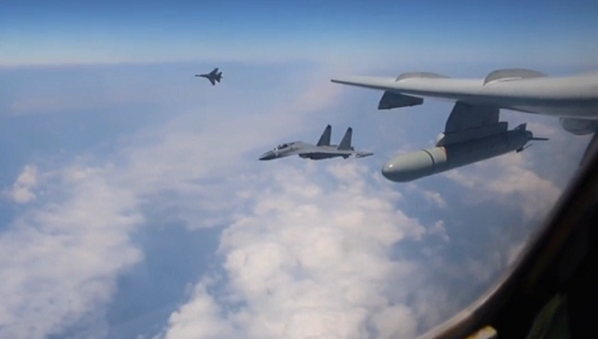 TAIPEI (Taiwan News) – The Chinese air force (PLAAF) has turned their recent encirclement drill of Taiwan into a publicity stunt to raise morale and push the nationalist “rejuvenation of the motherland” narrative.

On Saturday April 28, the PLAAF released a series of commemorative envelopes, and a promotional video showing clips of the fighters and bomber aircraft that participated in the flight drill that saw several types of aircraft encircle Taiwan last week on Thursday, April 26.

The commemorative envelopes include Chinese as well as English, while the English reads "Taiwan, the Treasure Island, is harbored by our motherland. The motherland will always be in our heart. It is the sacred duty of any PLA pilot to safeguard the territory of our motherland.” One of the seven commemorative envelopes

Some of the photos include visible mountains and shoreline of Taiwan’s eastern coast.

According to the PLAAF the video was released to “to let Chinese people of all ethnic groups, especially compatriots in Taiwan and overseas Chinese, understand that not a single inch of China will ever be separated from the motherland.”

Some footage of the video can be viewed here. In a news interview with a pilot who participated in the patrols, the pilot said that he could clearly see the wonderful landscape of Taiwan.

An H-6K bomber pilot speaking to a news reporter claimed that the Chinese air force has the faith, the ability, and the resolve, and are willing at any moment to take to the skies to do battle, no matter how complicated the situation, to defend the “national sovereignty and territorial integrity” of what he referred to as his “motherland.”

While the PLAAF was asserting a preparedness for battle in order to defend China by attacking Taiwan, the “Treasure Island,” Chinese reconnaissance planes were also spying on their neighbors in South Korea during the historic peace summit on Saturday.