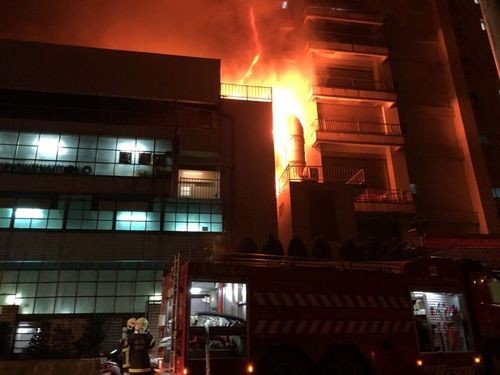 TAIPEI (CNA) -- President Tsai Ing-wen (蔡英文) and Premier Lai Ching-te (賴清德) have expressed condolences to the families of the victims killed in a fire that broke out at a factory in Taoyuan City Saturday night, which left seven dead, including five firefighters and two Thai migrant workers, and have directed relevant government agencies to do their best in relief efforts.

Shortly after hearing of the incident, Lai expressed concern and offered sympathy and condolences over the loss of the five firefighters in the line of duty, while directing relevant authorities to spare no effort to treat the injured, Cabinet spokesman Hsu Kuo-yung (徐國勇) said in a statement issued Sunday.

As of 7:31 a.m., the seven victims had been confirmed killed and another seven firemen were injured as rescue efforts continued, according to the Executive Yuan's office of disaster management.

The cause of the fire is being investigated, but a Taoyuan Fire Department has said the factory contained a large and diverse amount of chemicals, including highly flammable and explosive material.

A total of 189 firemen, 67 fire trucks and ambulances were sent to the scene of the fire to fight the blaze and carry out search and rescue efforts, according to Hsu.

The National Fire Agency under the Ministry of the Interior (MOI) formed a disaster response task force Saturday night, while the Environmental Protection Administration, the Cabinet's office of disaster management and the Taoyuan City government have all sent staff to help with relief efforts, according to Hsu.

Lai has spoken by telephone with Taoyuan Mayor Cheng Wen-tsan (鄭文燦), who was on site to coordinate firefighting and relief efforts, and directed the National Fire Agency and relevant units to provide their full support.

The five firemen were killed because they were trapped underneath heavy machinery equipment that made them unable to escape the fire, according to Cheng.

President Tsai has also instructed the MOI and relevant units to provide the best medical care to the injured firemen and offer the "highest possible compensation" to those who died in the duty of line, Presidential Office Spokesman Sydney Lin (林鶴明) said Sunday.

Interior Minister Yeh Jiunn-rong (葉俊榮), meanwhile, said Sunday through his Facebook account that rescue efforts are continuing and the ministry will take measures to better protect the rights of firefighters.