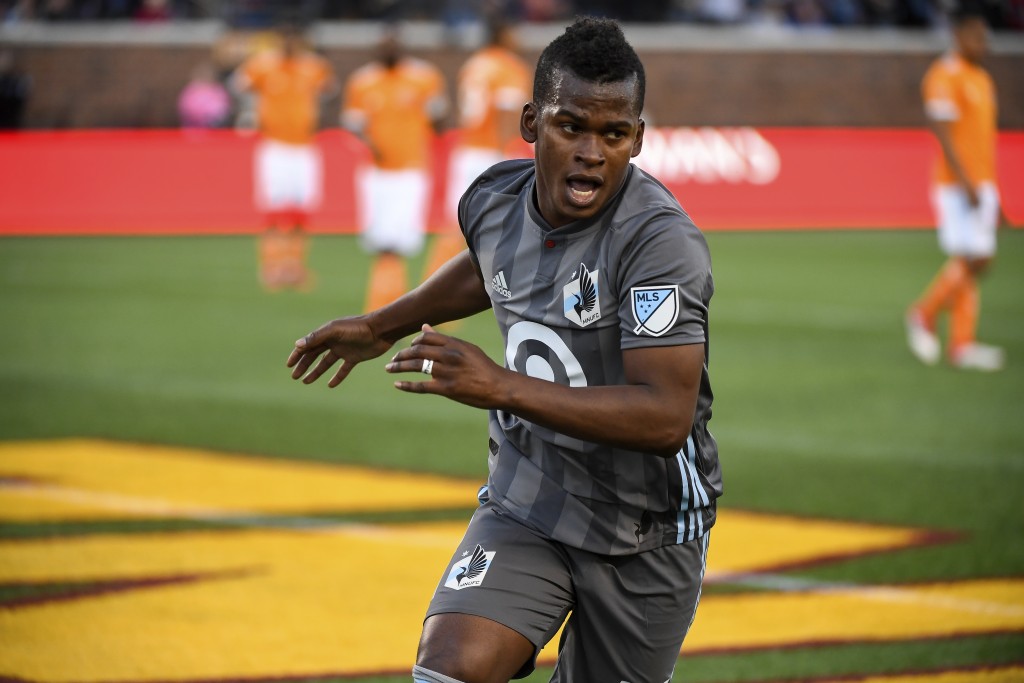 Ibson redirected a cross by Miguel Ibarra to give Minnesota (3-5-0) a 2-1 lead in the 70th minute. Ibarra tapped it to Martin on the right side, who led Ibarra toward the goal line where he fed Ibson for the finish just inside the far post.

Alberth Elis opened the scoring for Houston (2-3-2) in the 10th minute when Romell Quioto played a cross to Elis for a sliding goal into a wide-open net.

Minnesota has allowed a goal in 20 consecutive matches, the longest active streak of its kind in MLS.

It was the third shutout of the season for Turner, a 23-year old who made his first MLS appearance in the season opener and has started every game for New England (4-2-2) this season.

Bunbury, who played for Sporting from 2011-13, rolled it past goalkeeper Tim Melia for a controversial goal in the 44th minute. Sporting KC (5-2-2) had its seven-game unbeaten streak snapped.

Pedro Santos' cross skirted past San Jose's Magnus Eriksson and connected with Grella, who cut it back and slotted one home inside the near post. Grella entered as a substitute in the 65th minute.

Harrison Afful opened the scoring for the Crew (4-3-2) in the 28th minute with a right-footed shot into the top left corner.

Danny Hoesen headed home Florian Jungwirth's deep cross to tie it at 1-all for the Quakes (1-4-2) in the 45th minute.

Bastian Schweinsteiger had the other goal for the Fire. Jonathan Osorio and Victor Vazquez scored for Toronto FC.

With Chicago (2-3-2) trailing 2-0, Schweinsteiger's header off Diego Campos' corner kick got past Alex Bono in the 69th minute.

Gordon put home the rebound off Schweinsteiger's shot to pull the Fire even in the dying seconds.

Dockal blasted a right-footed shot from a narrow angle past goalkeeper Steve Clark, who reeled backward as the ball went above his head. It was Dockal's first career MLS goal and the Union (2-3-2) held on from there.

The Union's three goals doubled their total output for the season.

ATLANTA (AP) — Miguel Almiron and Kevin Kratz each scored a pair of goals to rally Atlanta United past Montreal.

Almiron tied it at 1-all for Atlanta (6-1-1) with a penalty kick in the 70th minute that slipped through despite a deflection off goalkeeper Evan Bush. Chris Duvall conceded the penalty with a hand ball in the area.

Kratz entered as a substitute in the 74th minute and gave Atlanta the lead in the 78th with a free kick into the left corner.

Saphir Taider gave Montreal (2-6-0) the early lead in the 13th minute with a header to finish Duvall's cross.