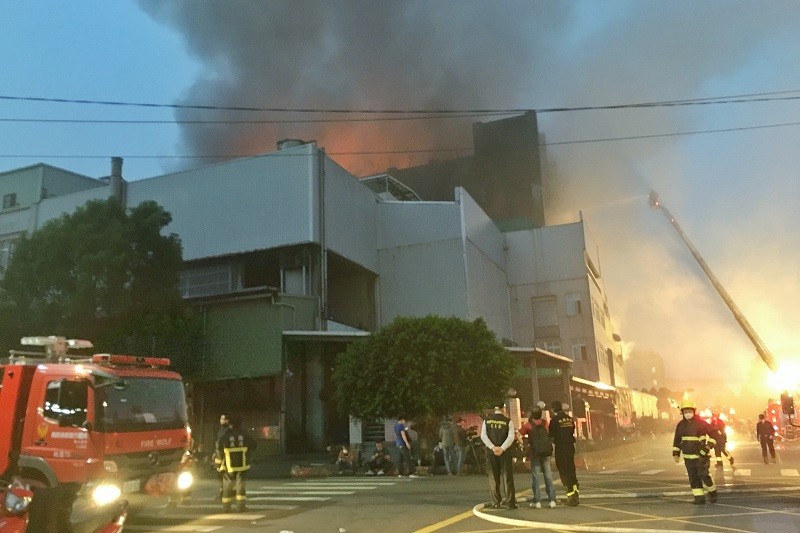 TAIPEI (Taiwan News)—Five firefighters and two migrant workers have died, with one other firefighter in critical condition and another with non-life threatening injuries after a deadly fire broke out in a factory in Pingzhen District, in northern Taiwan’s Taoyuan City around 9 p.m. Saturday night.

Firefighters responded to a report that a fire broke out in Chin Poon Industrial Co (敬鵬工業), a PCB maker, Saturday night sometime past 9 p.m. and that some workers were trapped by the fire. However, seven of the firefighters who went into the burning factory became trapped and were reported missing.

Around 00:50 a.m. on Sunday, three firefighters were rushed out from the scene of the fire, one by one. Lu Chng-yu (呂宗郁) was the first firefighter rescued from the scene and was sent to a nearby hospital with non-life threatening injuries.

Another firefighter rushed from the scene was Lin Po-ting (林伯庭), who was pronounced dead in a hospital after emergency treatment. The third was still in critical condition in a hospital by 5 a.m. Sunday.

By 4:14 a.m., four more firefighters were found and rushed out to local hospitals, but all of the four died.

Firefighters said that all seven of their colleagues were found on the first floor. As for company workers, one Thai migrant worker about 40 years old was found but later died in the hospital and another Thai worker was found charred to death in the factory.

Taoyuan Mayor Cheng Wen-tsan (鄭文燦) left the scene around 5 a.m. on Sunday morning and will later give the public more information about the fire.

According to Taiwan's National Fire Agency statistics, the five deaths amounted to the greatest loss of life for firefighters in the country in 11 years. Some firefighters are exhausted on Sunday mornings after putting out fire and searching for victims all night long.