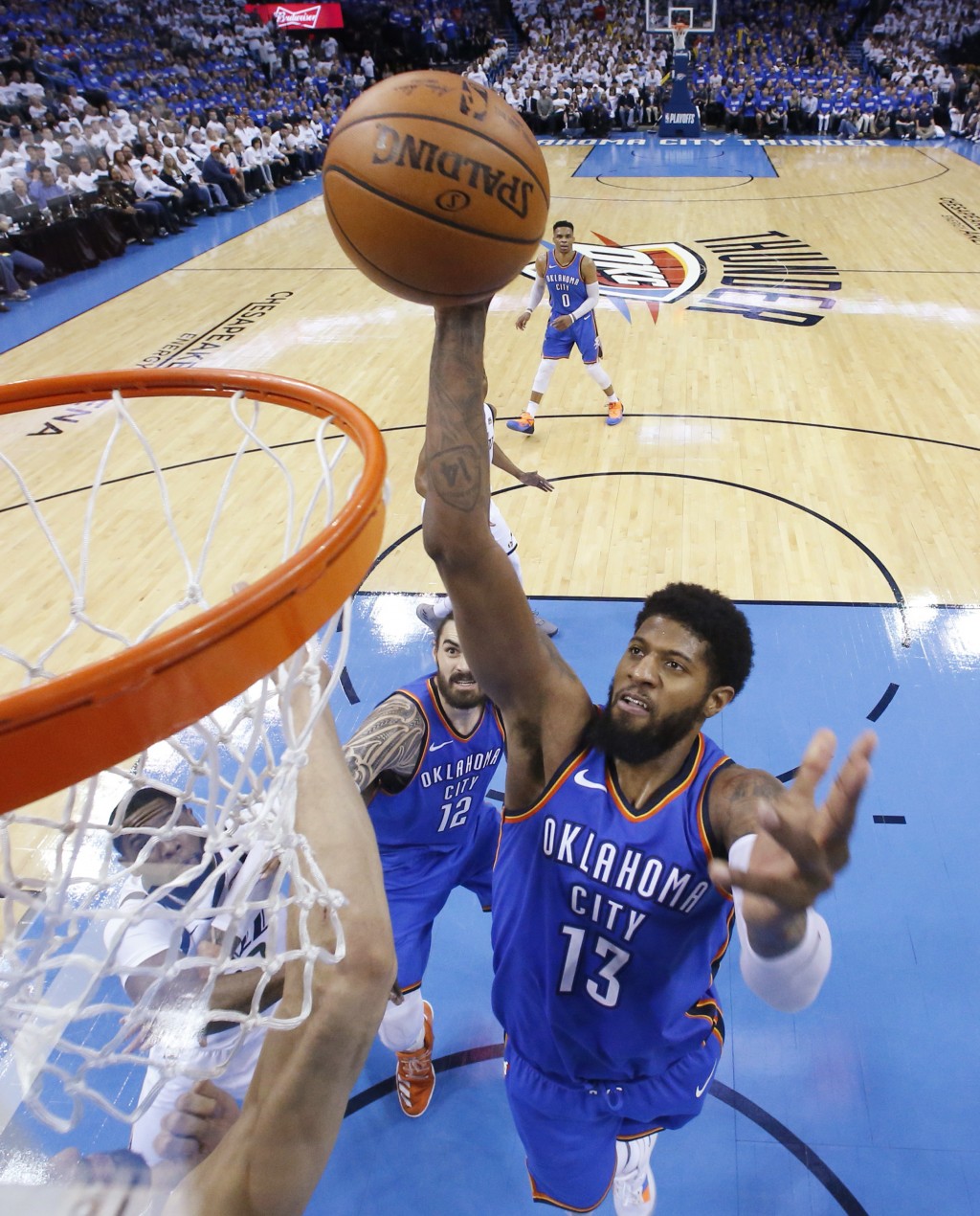 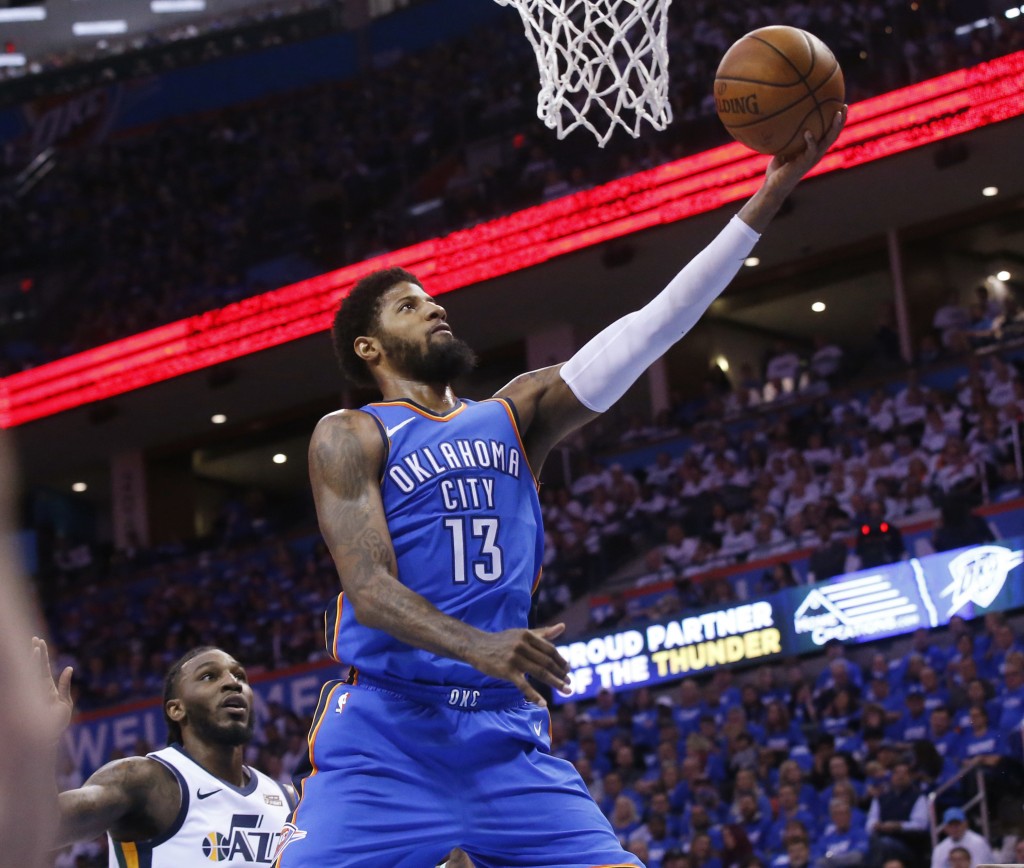 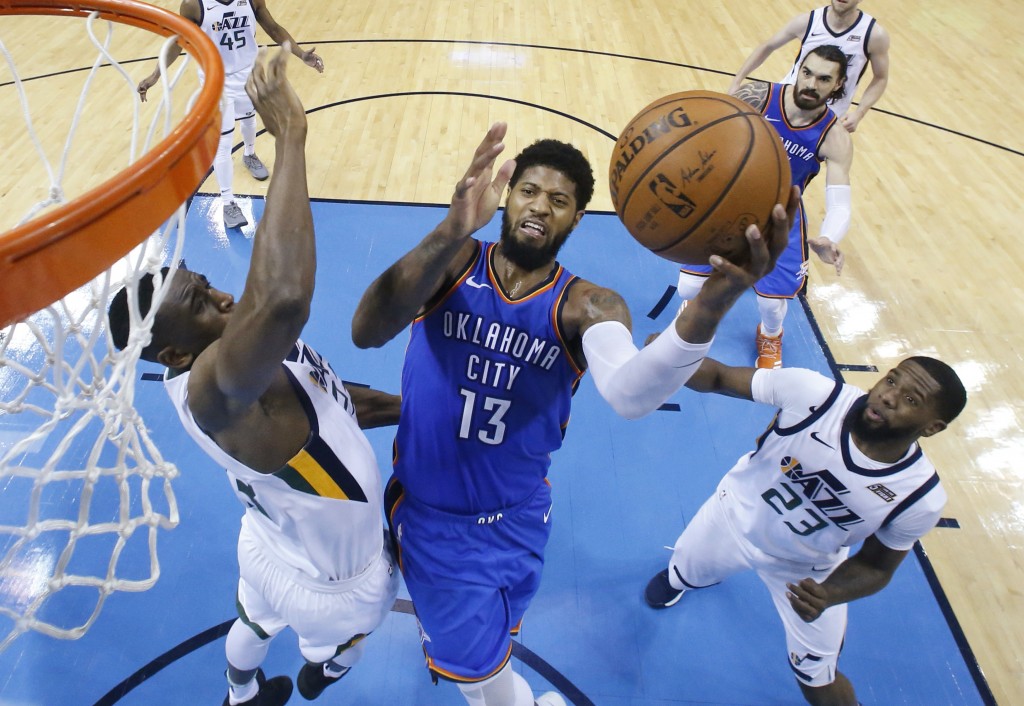 OKLAHOMA CITY (AP) — Paul George said all the right things when asked if he'd consider staying with the Oklahoma City Thunder instead of leaving in free agency this summer.

"They honestly check the boxes where I needed those boxes to be checked from what a player wants and needs out of a front office, out of a medical group, out of teammates, out of a coaching staff," George said Saturday, a day after the Thunder lost their first-round playoff series to Utah 4-2. "I mean, honestly, I can't say it any more than that. They checked the boxes on what needs to be checked."

George's decision will largely determine if a rare gamble by general manager Sam Presti pays off. The Thunder bucked their tendencies and went for big splashes before this season, trading for George and Carmelo Anthony to join Russell Westbrook in hopes of rejoining the NBA's elite.

It didn't work — or at least, it hasn't yet. Now, the Thunder and their fans are in an eerily familiar position. Kevin Durant had good things to say about Oklahoma City in 2016, but he left for Golden State. Now, George has a $21 million player option for next season. If he declines, he will become a free agent.

It would be a huge loss for the Thunder. George, a 6-foot-9 forward, was an All-Star who averaged 21.9 points and 5.7 rebounds this season and was among the league leaders in steals.

George's camp showed interest in the Los Angeles Lakers last year before the Thunder made the deal with the Indiana Pacers to get him; Los Angeles is near his hometown. George said going home would be enticing, but that wouldn't be the determining factor. He said he'd talk to Presti, Westbrook and coach Billy Donovan before making a decision.

"It will definitely be the opportunity on knowing, you know, team, personnel, and ultimately like what team will be assembled," he said. "That's the only thing that it will come down to."

George believes the team has something on which to build. The Thunder started off 8-12 but went 40-22 the rest of the way to earn the No. 4 seed in the Western Conference. Westbrook averaged a triple-double for the second straight year and Steven Adams evolved into one of the league's best centers.

But the team never fully recovered after defensive stopper Andre Roberson was knocked out for the season with a ruptured left patellar tendon.

Westbrook said that was hard to overcome.

Compounding the pressure on the Thunder to keep George is the fact that the players they traded to get him — Victor Oladipo and Domantas Sabonis — have been so good for Indiana. Oladipo had an All-Star season and Sabonis is a solid contributor.

Anthony was Oklahoma City's No. 3 scorer this season, averaging 16.2 points per game. His playing time dwindled in the playoffs and he wasn't happy. In Game 5, the Thunder rallied from most of their 25-point deficit against Utah with Anthony on the bench. In Game 6, backup Jerami Grant actually got more court time than Anthony.

Donovan said he won't need to mend fences with Anthony.

"I think there was a lot made of Game 5, him wanting to be out there, and I respect that, and I said that about his competitiveness. But I think going forward, Carmelo has been a total pro, and he's been a total team guy."

Anthony will be 34 before next season starts, but he still feels he can play at a high level. He became more of a catch-and-shoot scorer this season instead of the isolation specialist he had been. He said prefers to play his old way and said he has no interest in coming off the bench. Though he is due $28 million next season, he seemed unsure of his future.

"It's something I really have to think about, if I really want to be this type of player, finish out my career as this type of player, knowing that I have so much left in the tank and I bring so much to the game of basketball," he said. "And how long I want to continue to do this, I think that's also a thought process as well."

In the end, for all Westbrook's electrifying play and the two major moves, the Thunder have three playoff wins the past two years and haven't advanced past the first round since Durant left.

"Our biggest challenge to try to figure out I think in this offseason is our consistency," Donovan said. "That has been a problem. That's going to be obviously my major focus. I think it needs to be our team's major focus."