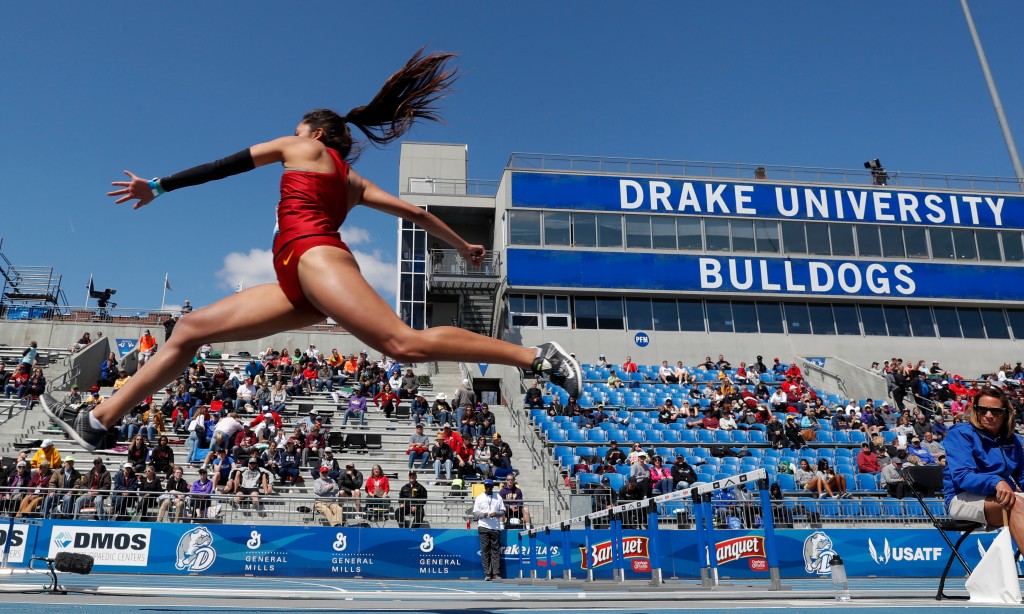 DES MOINES, Iowa (AP) — World record-holder Kendra Harrison capped the Drake Relays on Saturday by winning the 100-meter hurdles for the third year in a row.

Harrison, running in her first outdoor event of 2018, finished in a wind-aided 12.37 seconds to become the first athlete to win the event three times in a row since local favorite Lolo Jones won four straight from 2005-08.

The men's 100 went to Isiah Young in 10.02. But the bigger news was that Canadian star Andre De Grasse, racing for the first time since tearing his right hamstring days before last summer's world championships, finished fourth with a time of 10.15.

De Grasse said it was the fastest he'd run in a season opener.

"For me, it's all about coming out healthy," De Grasse said. "Now there are no limits for my next meet, and as the races go on (I'll hopefully) continue to get better."

Georgeann Moline won her second straight Drake title in the women's 400 hurdles, holding off 2016 Rio de Janeiro Olympics gold medalist Dalilah Muhammad with a time of 54.86, the fourth-fastest time in the world so far in 2018. Muhammad was second at 55.08. Moline got off-balance after the first hurdle, but she was able to steady and correct her form in time to overtake Muhammad. "It was really messy, but I just relied on my strength mentally and also physically ... I felt myself relax and get back into my stride pattern."

Jeffery Gibson, who won a silver medal at the Commonwealth Games two weeks ago, took first in the men's 400 hurdles. Gibson, a world bronze medalist in 2015, overtook T.J. Holmes in the final turn for the one of the biggest wins of his career. Bershawn Jackson was fifth in 49.64.

ALLEN FOR THE WIN

Former Oregon wide receiver-turned-hurdler Devon Allen held off fellow American Aries Merritt, the 2012 Olympic champion, to win the men's 110 hurdles. Allen finished in 13.42, while Merritt came in at 13.45. Allen said he'd been working on using seven steps, not eight, between hurdles for the past few weeks. "I did that (Saturday) and it worked out. So now I can just keep matching that, getting better at that," Allen said.

Ryan Crouser, who set the Olympic record in winning the men's shot put in Rio, won Saturday with a throw of 72 feet, 2.5 inches — after missing two months of training with a hand injury. Crouser hit his mark on his first try, and followed that up with five fouls.

Women's pole vaulter Sandi Morris fell short in three cracks at breaking her own American record, but she still won easily with a winning vault of 16 feet. It was the third consecutive Drake title for Morris.