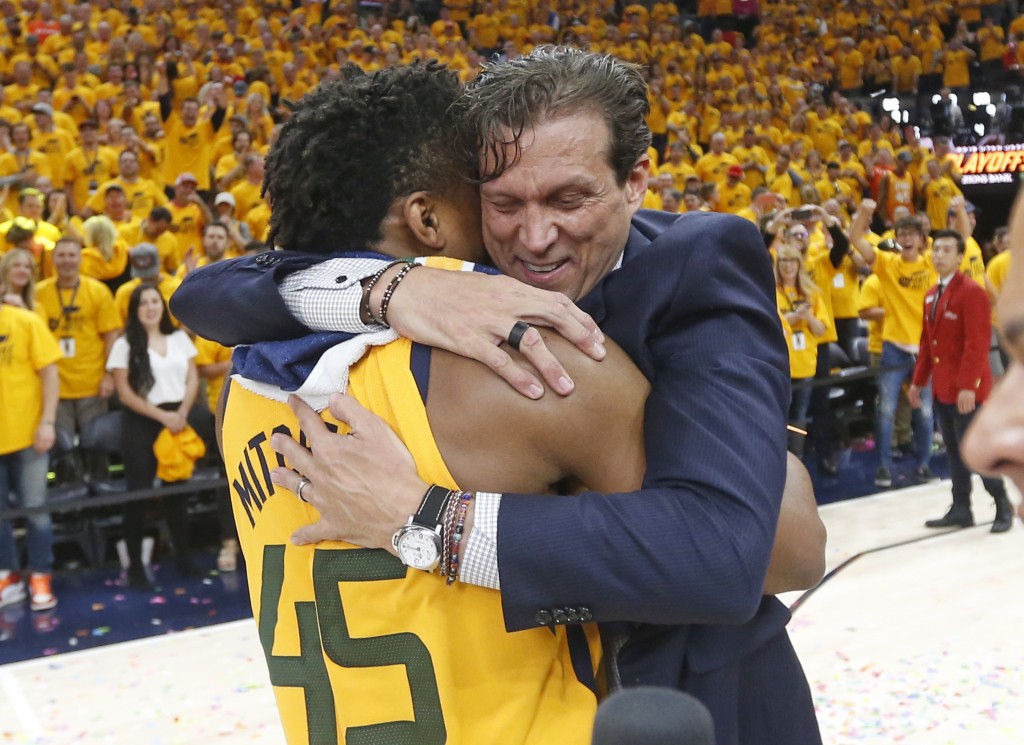 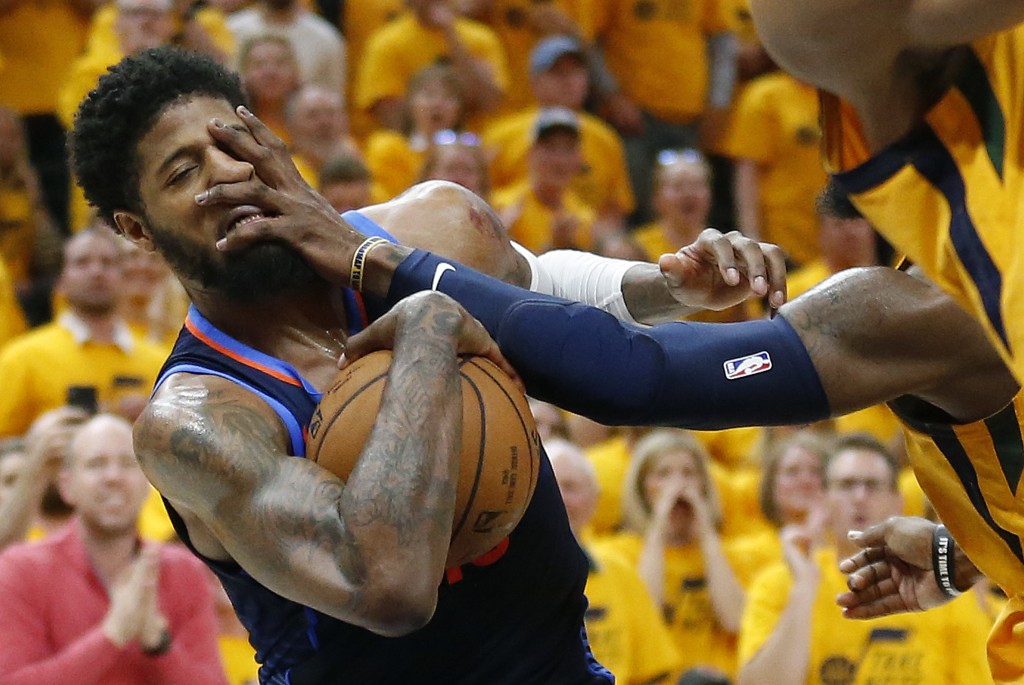 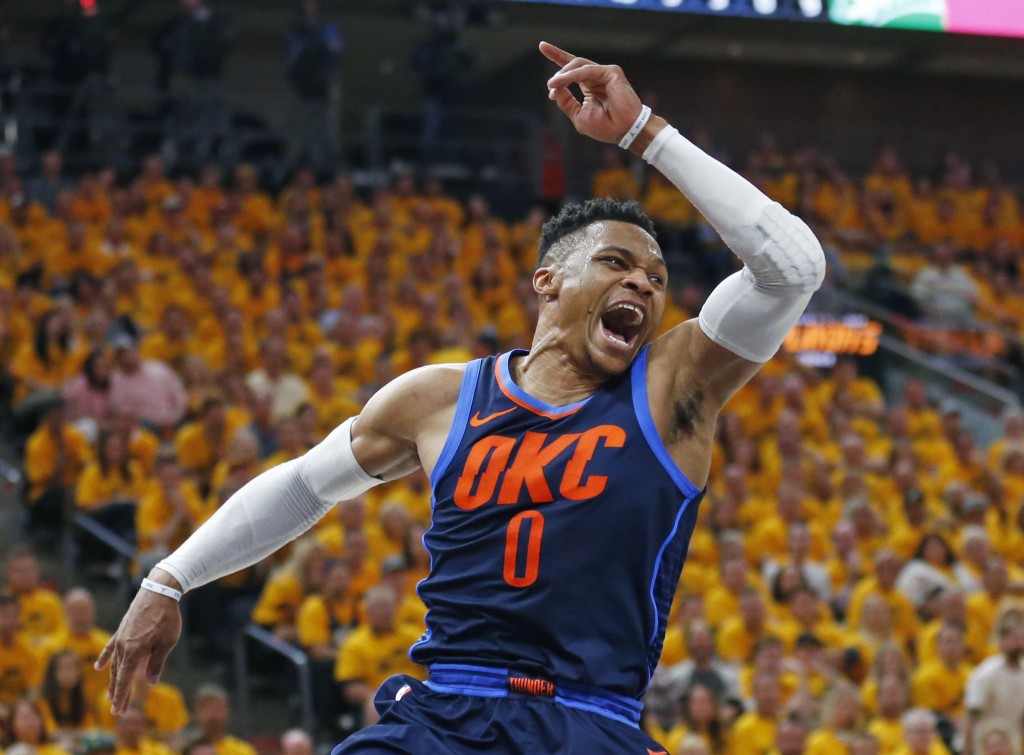 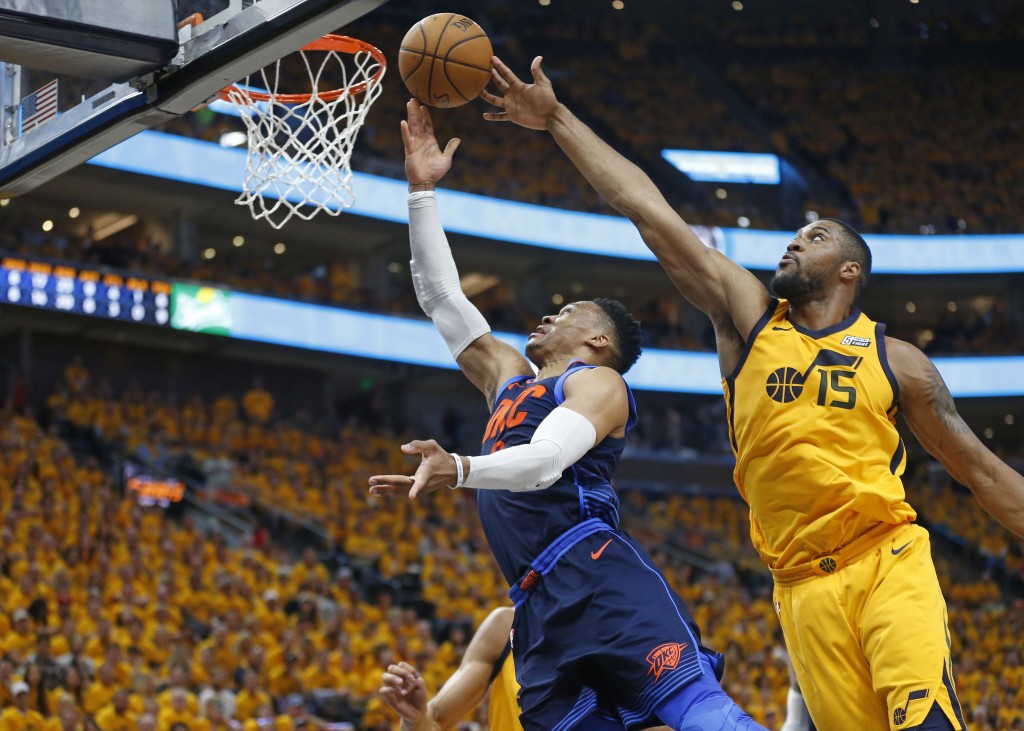 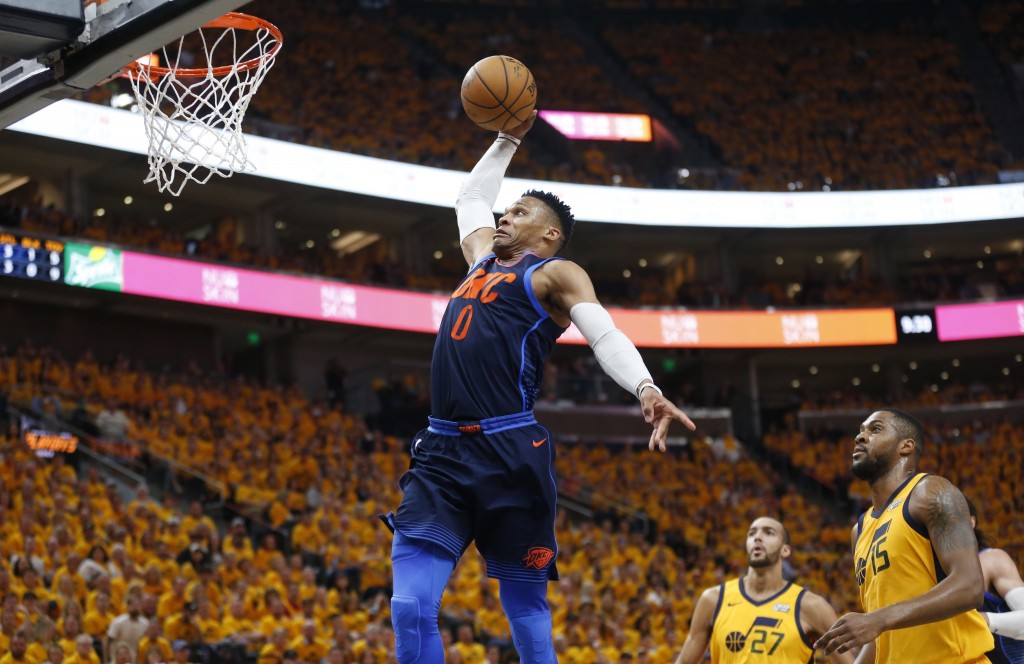 SALT LAKE CITY (AP) — Donovan Mitchell scored 38 points and the Utah Jazz held off the Oklahoma City Thunder 96-91 in Game 6 on Friday night to advance to the Western Conference semifinals.

Russell Westbrook had 46 points for the Thunder and Steven Adams added 19 points and 16 rebounds.

The rookie and the MVP went back and forth in the second half, with Mitchell and the Jazz moving on to face the top-seeded Houston Rockets in a series that starts Sunday.

Derrick Favors scored 13 points and Rudy Gobert had 12 points and 13 rebounds for the Jazz, who lost starting point guard Ricky Rubio to a left hamstring injury in the first quarter.

The Jazz took their biggest lead when Gobert hit two free throws to make it 86-73 with 7:04 remaining.

Favors hit a jumper for the Jazz but then the Thunder corralled five offensive rebounds in a frantic set of possessions where Oklahoma City missed five shots. After a review, Paul George faked Gobert into the air behind the 3-point line and leaned in but didn't get the call and shot an airball.

Mitchell scampered down the court as the Thunder yelled at the officials and eventually made two free throws with 6.9 seconds left to clinch the game.

After struggling to score in the first two periods, the Jazz just gave the ball to Mitchell and set screen after screen to allow him to take advantage of Oklahoma City's switching defense.

In the third quarter, Mitchell scored 22 points to boost the Jazz into a double-digit lead. The rookie scored on electrifying drives to the basket, spinning shots in the lane and rainbow 3-pointers.

The arena, awash in gold as the Jazz wore their yellow jerseys and every fan was given a gold T-shirt, roared as Mitchell held his arms aloft and beckoned for more.

Mitchell picked up his fifth foul with 10:01 to play but returned to finish the game midway through the fourth quarter.

Seven minutes into the game, Rubio began limping and left the game.

Facing a team without a true point guard, the Thunder extended their defense and disrupted Utah's sets. The Jazz were shooting from unfamiliar spots and connected on just 39 percent in the first half.

Oklahoma City led by as many as nine before the Jazz tied it at 41 at halftime.

Thunder: Jerami Grant made his first two 3-pointers of the series, the only Thunder player to make one besides Westbrook. ... Other than a technical, the Thunder shot their first free throw with 6:36 left in the half. ... George had a playoff-low five points.

Jazz: Gobert got a technical foul in the second quarter for complaining. ... Favors went 1 for 7 from the free throw line and the Jazz shot 12 of 23 overall. ... Mitchell joins Lew Alcindor as the only rookies to score 20 points in each of their first six career playoff games over the last 50 years. ... Coming into the game, Mitchell and LeBron James shared the lead for most fourth-quarter points in the playoffs so far.