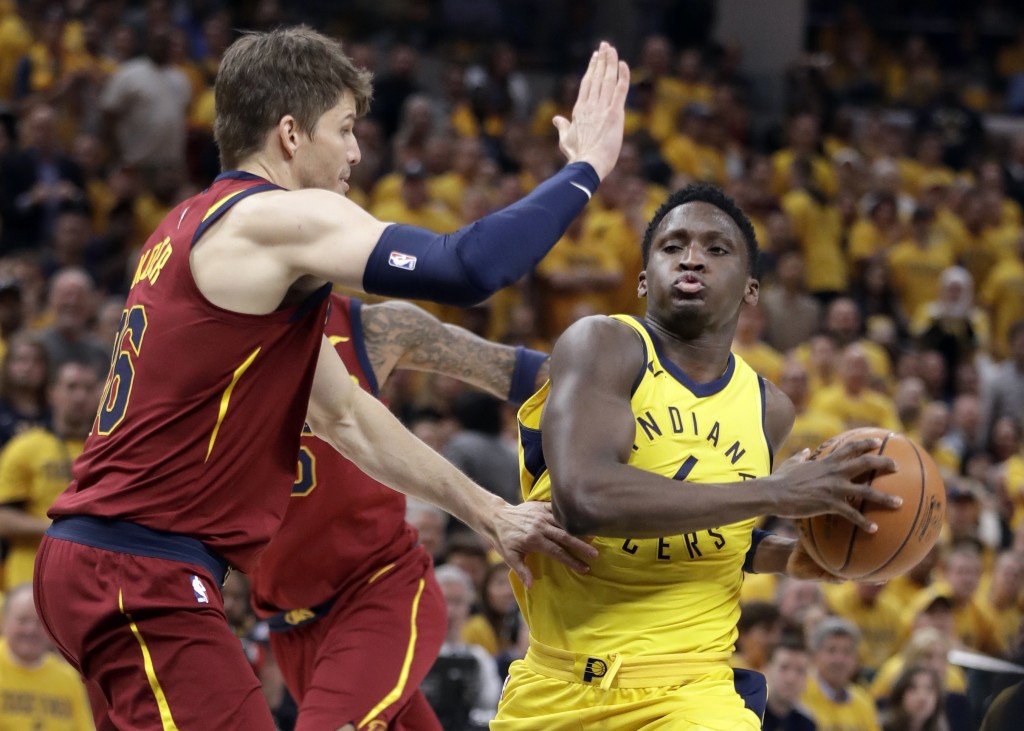 INDIANAPOLIS (AP) — Victor Oladipo scored 28 points and posted the first postseason triple-double of his career Friday night, leading the Indiana Pacers to a 121-87 blowout over the Cleveland Cavaliers to even the series at three.

Game 7 will be played Sunday in Cleveland.

The three-time defending Eastern Conference champs again were led by LeBron James with 22 points, seven assists and five rebounds despite sitting out the entire fourth quarter. Nobody else scored more than 13 points as the Cavaliers lost their first closeout game in 14 tries dating to 2009. James had won 11 consecutive closeout games and is 12-0 all-time in the first-round series.

Kevin Love hurt his left wrist on a hard fall midway through the second quarter and wound up scoring just seven points while shooting 3 of 10 from the field.

WASHINGTON (AP) — Toronto overcame a halftime deficit in a road playoff game for the first time in 24 tries, using 24 points from Kyle Lowry and a tremendous effort from its finally whole second unit to beat Washington in Game 6 and end the Eastern Conference first-round series.

Toronto trailed by as many as 12 points in the first quarter and was down 53-50 at the end of the second. The Raptors' first lead did not come until the third quarter, and they were back down by five points entering the final period.

But with star guards Lowry and DeMar DeRozan, who had a personal series-low 16 points, resting to begin the fourth, reserves led by point guard Fred VanVleet turned around the game. Bothered by a bad right shoulder, VanVleet had played a total of three minutes in the series until Friday, but he was just what Toronto needed in this game, with five points, four assists and four rebounds

John Wall had 23 points and eight assists in Game 6. Bradley Beal led Washington with 32 points. But the Wizards' run of eight home playoff wins in a row came to a close.