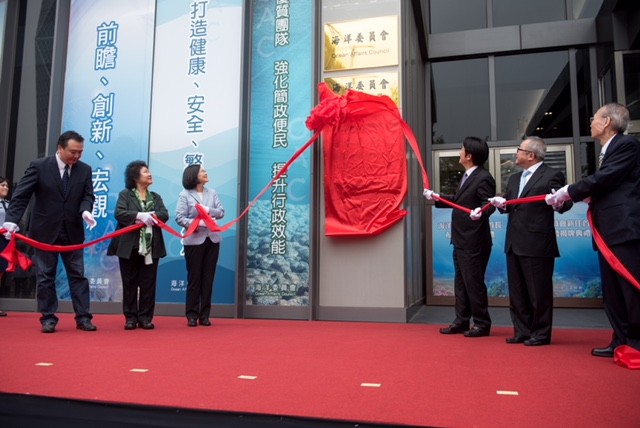 The council’s office is located in a building belonging to Hon Hai Precision Industry Co., Ltd. in the Kaohsiung Software Technology Park. The significance of the council’s establishment is evident with the presence of high-level Taiwanese officials from the central and local governments, as well as large crowds and reporters who peopled the district, which is usually rather quiet on weekends.

“Taiwan is an oceanic country. The ocean is coded in the DNA of Taiwanese people “ remarked President Tsai.

The president said the OAC would be an exclusive governmental institute responsible for the country’s marine affairs that were formerly managed by 22 different organizations.

“The establishment of OAC is the beginning of challenges,” said the president, adding that the council would begin tasks aimed at ameliorating marine-related policies that could benefit marine industries as well as cultivate talent in related fields.

OAC, now officially inaugurated, includes the Coast Guard Administration. It will also include an administration for marine conservation, as well as a national research institute of oceanography.

Hwung Hwung-hweng (黃煌煇), who received the imprimatur from Premier Lai as the appointed OAC minister, said the council would conduct negotiations with neighboring countries on the questions of fishing or operating in overlapping Exclusive Economic Zones (EEZ).

It will provide more protection for Taiwanese fishermen who often face unfair or even illegal treatment while operating in sea, added Huang.

Finally, the minister mentioned that the council would build a data base in order to thoroughly examine the marine resources possessed by the country and to employ effective measures to protect and preserve those resources.

After the remarks, all the officials and guests moved outside the building. President Tsai and other officials watched the performance of a lion dance troupe and a traditional music group, a scene often seen at such events, before unveiling the signboard of the council.